At the Movies: I can see the Cohen Bros.' new film, Inside Llewyn Davis, will be controversial. It's a kind of anti-film that trades on your formulaic expectations, assuming rightly that you will root for the struggling artist at the heart of this story - a folk singer in the 60s - but then proceeds to present a portrait of a man who can't make connections in his life, whether with his audience, in his personal life, or as a protagonist, leaving many things unresolved and ambiguous. Llewyn is not a likable character, but that's the point. He's a fake. He's not authentic like the other characters in the story. He can't tell genuine from false, a theme that recurs in different ways throughout his rather pathetic, pointless and recursive odyssey. Which isn't to say his music isn't good, his and other artists' numbers are solid, but he's deluding himself if he thinks he can successful with it. One of the central metaphors of the film is wrapped up in a feline companion whose fate tends to mirror his career and mood - that's some of the best cat acting I've ever seen, by the way, and probably the hardest thing about making this movie if I know my cats - but it isn't the only one, far from it. Inside Llewyn Davis could be analyzed up and down for a long time and still yield interesting stuff. But to some audiences, it'll a boring, pointless non-story about a jerk they can't connect with. Definitely one to watch and rewatch, because it's a layered onion. And not everyone can stomach onions. (My group of cinephiles do, and I must credit many of these thoughts to its members; this really was a discussion piece we were still talking about days later.)

DVDs: Breaking Bad Season 2 cements my love of this series and reviewing the 13 episodes that were included, I can't believe so much stuff happened. Walt's rise (or fall?) as a master criminal proceeds apace, and the pathetic moron Jesse continues to bring the funny and the tragic, but the rest of the cast gets so love, new characters are introduced, and expectations are usually confounded. I only have one complaint about the season and it's that the beautiful and lyrical openers with the burned teddy bear turns out to be something of a cheat. Karmically motivated, sure, but not really playing fair with the audience. But we'll see how those elements play out in Season 3, maybe I'll eat those words. The DVD has an excellent package of extras. 4 of the 13 episodes have pleasant cast and crew commentary and each episode has a small making of (obviously for web purposes, but fine nonetheless), plus deleted scenes, outtakes, a picture gallery, and various small featurettes (the average extra is 3-4 minutes) about the various aspects of making the show. The set also features some of the most entertaining webisodes I've seen for any series, an equally amusing series of minisodes called Cop Talk in which Dean Norris (Hank) interacts with real cops, two music videos from the show and Saul's complete TV ad which is worth freeze framing in spots. I'm only disappointed there was no way to put the viral Walt's Wisdom and Walt's Warning on here somehow. 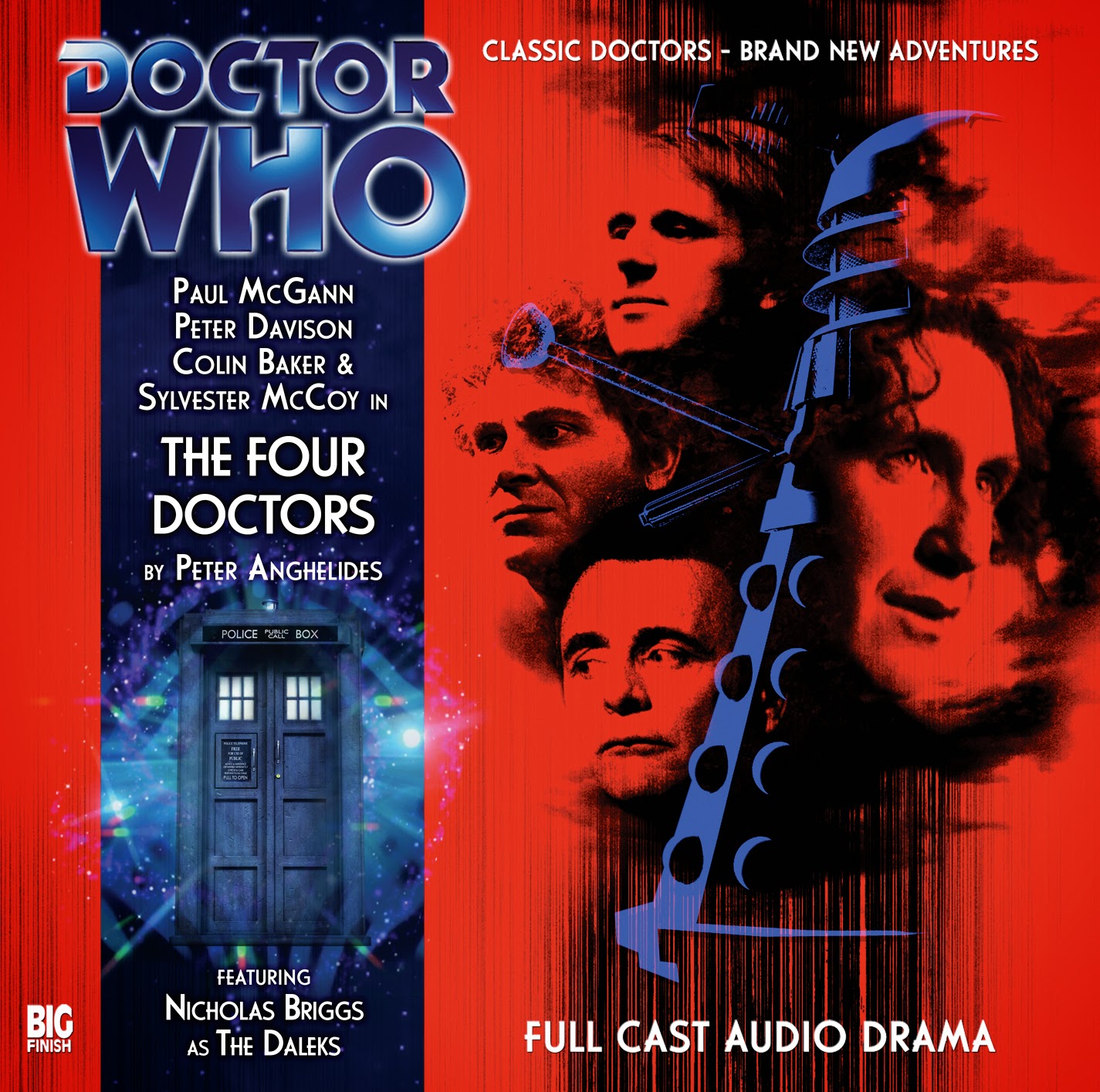 Audio: The Four Doctors by Peter Anghelides is a fun twisty-turny, timey-wimey Doctor Who adventure from Big Finish that uses their four starring Doctors (at least, before Tom Baker started doing audios; so Davison, Colin Baker, McCoy and McGann) to fight the Daleks across space and time. The Doctors don't meet exactly, but pick up where their former selves left off, often out of sequence, caught up in a kind of time loop. It's a clever way to do such a story, proposing a paradox without breaking time in the process. Whatever confusion may result is dispelled by the end as all the pieces fit together. A nice way to contrast these Doctors without resorting to the usual petty squabbling that often results in their get-togethers (though those can be fun as well). 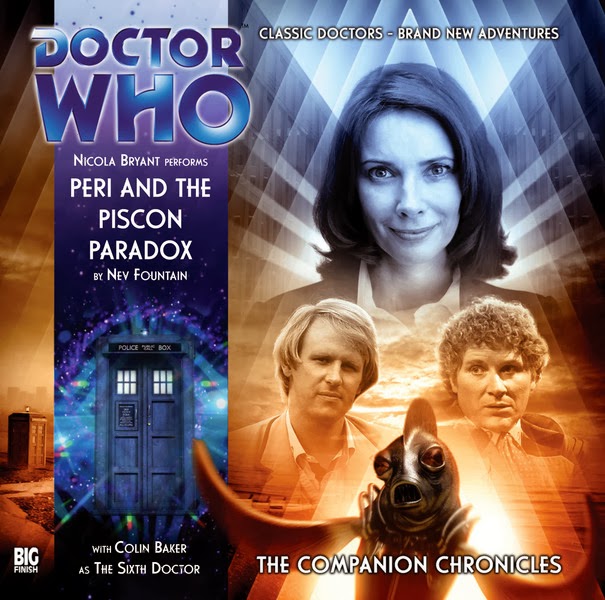 Nev Fountain's Peri and the Piscon Paradox is another timey-wimey tale and my favorite audio in a while. It's hilarious! A double-sized Companion Chronicle with Nicola Bryant reprising her role as Peri not once, but twice, it straddles her two Doctors in an intriguing way as well. In the first half, she's with the 5th Doctor and encounters her future self in L.A. Together, they get embroiled in a Piscon (a kind of fish alien kind of related to the Piscatons of old) plot. Bryant does all the voices, so it helps her that Peri's there twice, but she still manages to differentiate the younger from the older. In the second half, Colin Baker joins her as the 6th Doctor and experience the same story from her older self's perspective. The script doesn't dwell on scenes we've already heard, but rather focuses on revealing the truth behind this encounter. So that's fun, but really, it's the sparkling script that wins you over, very witty and amusing - and touching when it needs to be! - and you just may find yourself liking what the paradox means for the range (though they have yet to exploit it, so far as I know). 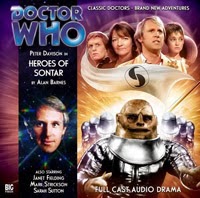 With Heroes of Sontar, Alan Barnes has the 5th Doctor, Tegan, Turlough and older Nyssa (introduced in the previous 5th Doctor trilogy) encounter some special needs Sontarans on a resort planet, and hilarity ensues. So Strax isn't the only comedy Sontaran on the books. It's not just a comedy to take the piss out of this visually silly race, but their defects are actually part of the plot. I don't much like their opponents, the Witch Guards, though. The distortion on their voices makes them hard to understand. Still, that's not Barnes' fault, and he's generally adept at juggling his large cast (in a way the show never was in that era, just as it was denied comedic elements which the actors here prove they could do very well, especially Janet Fielding as Tegan). Everyone gets something to do, and the Sontarans are individuated too. High on action, it's less of a character piece though you'll learn a little something about Nyssa that makes her more interesting (always welcome). This was a good week for audios, all told!

Your Daily Splash Page this week features a splash from every DC title, alphabetically, from Unknown Soldier to The Wanderers.
Doctor Who Geekly roundup

Jeremy Patrick said…
I always imagine that the money you save on these great Amazon deals has to weighed against your investment in floor-to-ceiling bookshelves to hold them all ;)
January 19, 2014 at 7:36 PM

Siskoid said…
Oh major shelving problems here. It's gotten out of control for sure. Call Hoarders!
January 20, 2014 at 7:46 AM