Got a couple of DVDs this week, Captain Phillips and Machete Kills, not both of which are nominated for Academy Awards.

At the movies: Her was a film about many things, but its main theme, to me, was loneliness. A very modern kind of loneliness. Everyone connected through social media, and yet alone in front of screens both large and small. On the surface of it, the main character falling in love with an artificial intelligence is science fiction, but how much does their relationship differ to those of people who meet and fall in love on the Internet? People who used to be text and possibly voices, and who relatively recently might have a moving image on screen. Spike Jonze's new film uses this sweet and complex relationship to explore emotional surrogacy. How are feelings impacted by medium they're transmitted through? Are they still real if an intermediate is required? At its core, this is a relationship story, regardless of its sci-fi tropes. Only towards the end do the ramifications of the technology take center stage, nevertheless without taking the focus away from the two lovers. A wonderfully touching film, incredibly contemporary, beautifully shot and sensitively acted. I kind of fell for the Operating System too (and couldn't place the voice, no spoilery distractions for me thanks to accidental avoidance of movie poster or Internet information).

DVDs: In need of comedies after that, I jumped on some of newer arrivals, starting with Super, a strange comedy about a real-life superhero (real-life in the sense that it would be set in the real world; he's played by The Office's Rainn Wilson) divinely inspired to done a costume and fight evil. Done on the cheap, it uses its low budget to its advantage to present that grounded world, and benefits from major talent working on the film for scale, including Ellen Page, Kevin Bacon, Nathan Fillion and Liv Tyler. It's funny, pathetic, tragic, touching, hyper-violent, sincere, shocking, and clever. I've never seen Kick-Ass (because Mark Millar), but this is what I imagine it should be and likely isn't. The DVD includes a commentary track from Wilson and director James Gunn, a deleted scene, making of featurettes, and a fun in-character video that serves as untold adventures of the Crimson Bolt.

I'm always up for a hockey movie despite not being a sports fan, and Goon surprised me with its earnestness, relating to both the character and the portrayal of hockey. The teams may be inventions, and the names may have been changed, but Goon is based on the life story of a real person, and makes a fine tribute to a position that gets little recognition despite serving a role that helped make hockey as popular as it is, whether can defend the game's violence or not. Writer/co-star Jay Baruchel and director Michael Dowse have made a very Canadian movie - and one mostly taking place in the Atlantic Provinces, for which I am especially grateful - with our accents, our concerns, our towns, and our music, packaged for a wider audience thanks to stars Seann Michael Scott (his best film ever?) and Liev Schreiber. Sweet in spite of the violence, it's a fun (and funny!) little film. The DVD includes a potty-mouthed director/writer commentary track, deleted scenes, a gag reel, audition tapes, an in-character fighting lesson, a hockey card gallery, and a making of featurette, and extended interview with Scott and Baruchel.

It's sometimes surprising to me how good Ben Stiller, the writer-director, can be. Tropic Thunder is a great comedy about movie-making in the Hollywood system, with memorable, hilarious and quirky turns by various stars including Robert Downey Jr., Tom Cruise, Jack Black and Matthew McConaughey, spoofing mostly Apocalypse Now - a war film in trouble and over-budget - but hitting all sorts of targets along the way, sometimes lovingly, sometimes viciously, but always justly. Beautiful cinematography too; it plays at being the Oscar-baiting war film the characters are trying to make. The DVD extras are good fun too, with a cast commentary that puts Stiller, Black and Downey Jr. in the same room (and the latter stays in character, nice in-joke), deleted scenes, outtakes, full mags of improvised stuff that presents well how the film was shot, a number of making of featurettes about various aspects of the filming, a documentary trailer that spoofs Hearts of Darkness, and "viral" videos made for the MTV Movie Awards.

I've heard Tom Cruise is physically miscast as Jack Reacher in the film, but having never even heard of the books before this movie came out, it doesn't really bother me. Truth be told, Cruise gets to some really cool martial arts, quick, brutal and realistic, in the film, and sells the character's physicality fine. Reacher is a former military investigator, now something of a drifter who comes out of the shadows to get justice where justice is impossible, something of a cross between Sherlock Holmes and Batman, and in this particular picture, gets involved in a conspiracy hidden in what looks like a mad public shooting. It's good stuff. A good mystery, good action, fine characters, but most of all, a splendidly smart hero who's always thinking, even in the heat of battle. I'd watch a sequel. 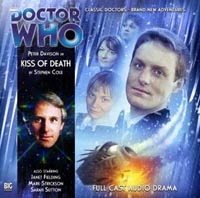 Audio: Stephen Cole's Kiss of Death continues Big Finish's Fifth Doctor, older Nyssa, Tegan and Turlough 2011 triptych, this time focusing on the latter by cleverly using his backstory from Planet of Fire without making the Doctor aware of it. It looks like Turlough was a bit of a Romeo when he was younger, see, and now his Juliet is back, but she might be back to betray him. That part of it is pretty good, but is a strange fit with the B-plot about ice creatures trapped in a vault some Trionites want to get into. Eventually, the two plots converge, but I'm not convinced. It also seems like these three consecutive stories (starting with Heroes of Sontar, reviewed last week) are each obsessed with creating thoroughly annoying alien voices. Kiss of Death has the worst of it, the wet mouth sounds rather revolting to me. Sorry. 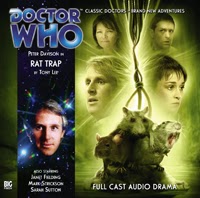 Rat Trap marks Doctor Who comics writer Tony Lee's only audio to date, and it's a remarkably effective one, making good use of the Rat King urban/folk legend, with a little bit of 80s nostalgia thrown in. (What I thought of as a near-past "historical" setting was really the fifth Doctor's "present"; it just made use of the day's headlines in a way the show rarely did, that's all.) So yes, the telepathic rats have slightly irritating voices, but as characters, they're not bad, and of the humans in the story, several keep your interest, the best of these the remorseful scientist responsible for the rat nightmare. No surprise, he's played by Terry Molloy, he of the excellent audio Master. Interestingly, a lot of the actors played rats as well as their human characters. When I listen to it again some day, I'm going to try and see if the humans and rats played by the same person have some sort of thematic connection. 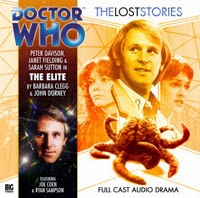 The Elite is a fifth Doctor Lost Episode which, had it been produced, would have aired right after Arc of Infinity. The original story pitch was by Barbara Clegg (Enlightenment); the finished audio script by John Dorney. They've really done their best to make it sound like it would have had it aired in the early 80s too. The music is right out of that era. And so is the plot, though it benefits from a more modern hand and witty hindsight. It takes place on a planet scarred by war, where young people (on television, it would have been children) are made to play video games that are actually part of an actual conflict. That's just a small part of it. What we get is a good look at politics and religion on an alien world, and a surprise villain acting as high priest, selfishly manipulating this culture to help him/itself. It feels like the main story ends a bit early with Part 4 less focused, but it's still a good entry in the Lost Episodes range.

Your Daily Splash Page this week features a splash from every DC title, alphabetically, from Warlord to Weird War Tales.
Doctor Who Geekly roundup

Zundian said…
Samantha Morton originally did the voice of Samantha (thus the name) but was replaced by ScarJo afterward.

Michael May said…
I just watched Jack Reacher myself last night and I agree with everything you wrote about it. It took me a while to watch it because as much as like Cruise movies in general, the trailer made the movie look totally generic. I'm so glad it wasn't.