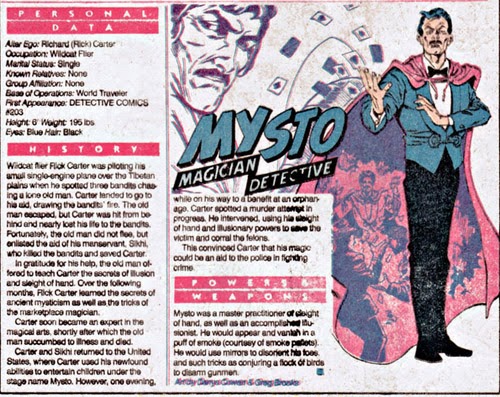 The facts: Not to be confused with a variety of villains who took the name over the years at different publishers' output, the magician detective starred in one of several secondary featured in Detective Comics, from #203 to #212 (1954), and was dropped when the book cut down on its number of pages. His only "modern" appearance is in Detective #500, along with other old Detective featured players like Roy Raymond and Slam Bradley.
How you could have heard of him: Mysto has no appeared since his little half-page in Who's Who.
Example story: "The Three Feats of Peril!" from Detective Comics #209, reprinted in The Best of DC #30 (1982), by Bill Woolfolk and Leonard Starr So the question our featured Mysto story has to answer is: What situation requires both a magician AND a detective. Well, this one starts with a dinner invitation from the world's greatest magician, Zambesi, to dinner and a murder. Mysto must live quite a ways away, so he pilots his plane to Zambesi's back yard air strip (!) and meets colleagues from the world over at the dinner party. Zambesi announces that he always planned to retire after he'd figured out three grand illusions, the "three feats of peril", and now he has. He's about to share his secrets when the lights go out! 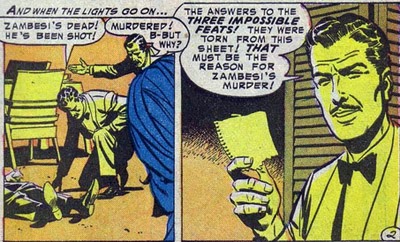 If the answers were torn from Zambesi's notebook, then it stands to reason one of the other magicians killed him. But what ARE these three feats? Here they are: 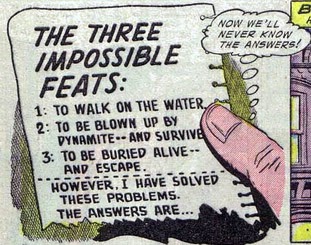 So all miracles from the New Testament, then. Instead of playing Clue with the dinner guests, Mysto flies home. (I can see why Detective Comics is full of amateur dicks... the police aren't doing a very good job.) During the flight, he decides to attempt Zembesi's three feats. So do a couple of other magicians, and they all meet with a journalist on some dark wharf. The journalist may be covering the stage magic beat, he's still the tough investigative sort. One after the other, the magicians' tricks are discovered and each man is disqualified, including the Great Marvelo whose shoes, when dipped in a barrel of water, inflate with helium. Not Mysto's though, and he heads out across the water. Magic! 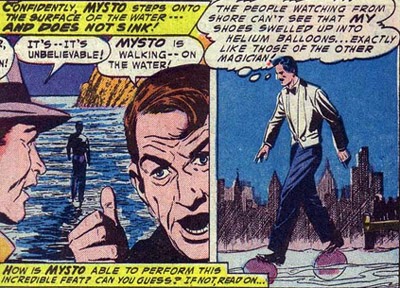 The real trick was both expecting someone to test his shoes AND being reasonably sure they'd only be dipped in FRESH water. Close by, a dark mysterious figure watches. By the second trick, only Mysto is in the running. It looks like he dynamites himself, but no one noticed the first, obfuscating explosion: 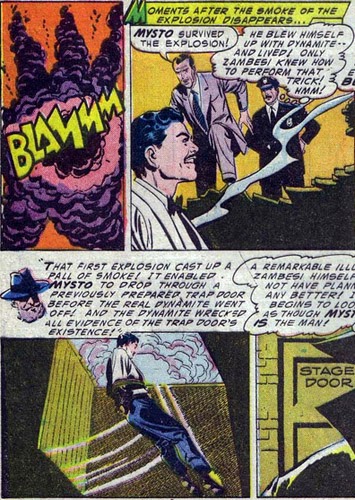 Now the police are getting suspicious. If Mysto can do all three feats, it surely means it's because he killed Zambesi and stole his notes! Again, a dark figure sees all and thinks Mysto "IS the man." The third trick involves Mysto being buried alive while the police watch. The only way he can prove he's not a murderer is to die! But Mysto survives; he'd previously dug a tunnel under the grave and only has to work his way DOWN from the casket. But can he Houdini himself out of a murder charge? You bet! Remember that dark figure? Well... 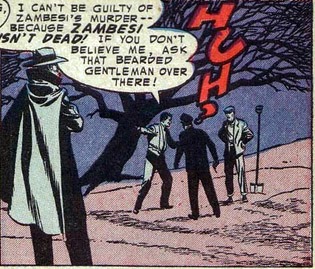 Zambesi wasn't dead at all. He faked his death using a gun rigged to the lights, and uncanny yoga techniques to stop his heart. So how did Mysto know? It's not the the ellipsis on the notepad, which to me indicated Zambesi knew the paper would be torn there. For Mysto, it was the idea that no magician would kill for magic tricks lest it be over-obvious that magician was the killer once he started performing them. He'd noticed the stalker too and put 2+2 together. So what was Zembesi's motive?

Well there you go. Now Mysto is the world's greatest magician, signed and sealed. So naturally, he was three stories away from almost never being heard from again. But that's how you marry detective work to stage magic, folks. Simple as that.

Who else? I thought of the Monocle, who really did seem obscure when Who's Who came out, but he's since come into his own. Multi-Man would have made it back in the day too, but the comedy Injustice League saved him from this fate. Next up is a character that did eventually get a lot of play, but was really obscure at the time (still is, really), so I'm nothing if not inconsistent.
Comics Golden Age Who's This?

Zundian said…
What a wonderful write-up! The alt-text gags were especially hilarious.

Magic (stage) and Wrestling stories are always so interesting to me. Civilians trying to figure out how things work in the carnival worlds add another layer of entertainment to these stories
January 14, 2014 at 8:47 AM

Doc Savage said…
That's some nice artwork. How can Mysto not have his own series while uninspired D-listers like Green Arrow get TV shows?!
January 14, 2014 at 11:14 AM

Siskoid said…
It's not the kind of stuff I watch, so I couldn't be sure. Castle serves all my specialty detective needs.
January 14, 2014 at 5:13 PM

American Hawkman said…
Both the Mentalist and Psych are fine programs. I'd recommend Psych to you, actually... just insane and pop culture-y enough to tickle your fancy. :)

As for Mysto, I was always intrigued by his Who's Who entry, but hadn't ever seen his actual strip... good stuff, actually. I wouldn't mind seeing him revived in the appropriate context.
January 14, 2014 at 5:41 PM

Jeremy Patrick said…
I was planning on building an airstrip in the back yard, but darn kids insisted on a trampoline . . .
January 14, 2014 at 7:19 PM

Unknown said…
The half-pagers were sometimes among the more interesting characters -- Mysto is a concept that has legs as far as mystery detective stuff is concerned.
January 15, 2014 at 6:20 PM

Erich said…
The British TV series "Jonathan Creek" was an excellent magician/detective series. (Although, technically, Jonathan Creek wasn't a magician himself...he was the behind-the-scenes guy who devised and designed the tricks for a stage magician.)
January 16, 2014 at 1:38 AM

Martin Gray said…
Thanks for this, I've not read a Mysto strip previously, this shows how much work the creators of decades past would put into a 'disposable' short. And I love the lettering, and the logo too.

Martin Gray said…
Hmm, maybe I'm confusing Moolah the Mystic with something from a British comic. Anyway, sorry, derailing here!
January 16, 2014 at 11:29 AM

Siskoid said…
Other possibles from his Wiki page include Hamid the Hypnotist and yeah, Moolah the Mystic.

The only strips I recognize by name in the list are Tricksy the World's Greatest Stunt Man and Super Turtle, but I know I've seen others.
January 16, 2014 at 11:36 AM

Martin Gray said…
DC should include some of these in collections. The world is waiting for the return of Jerry the Jitterbug and Cap's Hobby Hints.
January 16, 2014 at 12:46 PM

Siskoid said…
It's all very well to reprint, say, ever Superman story from Action and Superman, but there really should be collections that reprint those comics themselves, including all back-ups, humor strips and house ads.
January 16, 2014 at 1:07 PM