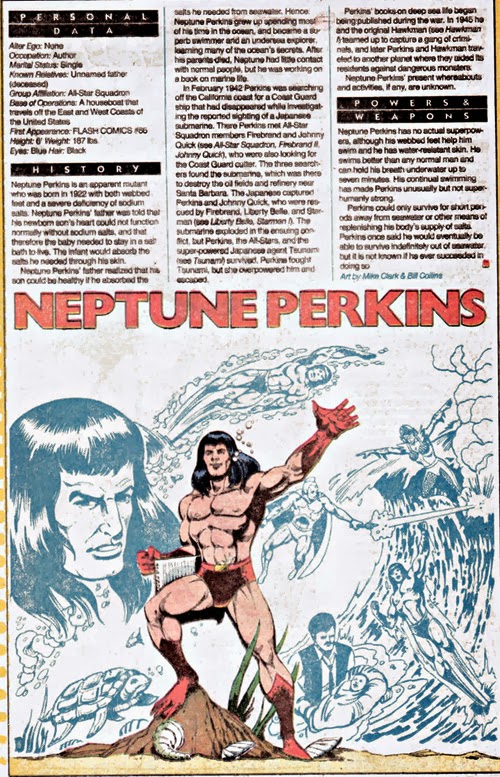 The facts: Neptune Perkins first appeared in a Hawkman story in Flash Comics #66 (1945) and teamed-up with Carter Hall once more in Flash Comics #81 (1947). That's pretty much it until Roy Thomas dug him up and used him a couple times in All-Squadron in the early 80s, and then made him a core member of the Young All-Stars, taking Aquaman's Golden Age spot after Crisis erased the yellow-gloved King of the Seven Seas during the Crisis.
How you could have heard of him: As a Young All-Star, his origins were retconned to make him the mutant son of the real-life Captain Nemo who had forced aliens to make him a high-tech submarine. The man eventually changed his name to Perkins and married a Titanic survivor. I guess Neptune literally had the sea in his genes. Neptune Perkins would actually appear a fair number of times in the contemporary DC Universe, first in some issues of Peter David's Aquaman as the father of a new character called Deep Blue, and then having become a U.S. senator, a member of the committee monitoring Young Justice. He was killed in action in Infinity Crisis #3. So yes, he appeared quite a bit, but as with most Golden Age heroes, I'm really interested in what they were like BACK THEN.
Example story: "The Dweller in the Sea" by Gardner Fox and Joe Kubert, from Flash Comics #66 (1945) 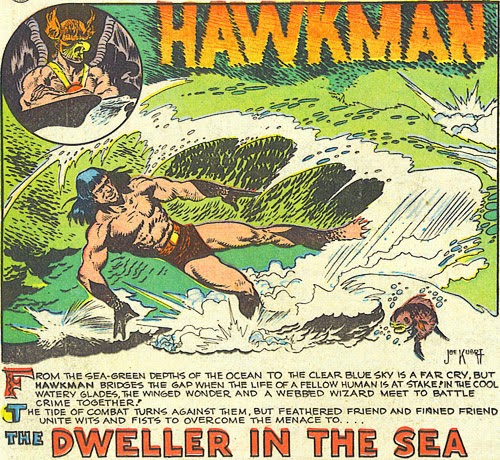 For some reason, I always thought Neptune Perkins had his own, short-lived strip. After all, outside the Justice Society, it was rare for superheroes to meet and team up back in the Golden Age. But no. In both his Golden Age appearances, he featured in a Hawkman story, and the Winged Wonder is obviously the star; Perkins part ally, part damsel in distress. The Who's Who entry also makes it seem like Neptune is an underwater hero like Aquaman. Again that's wrong. He lives on a boat and though he must swim a lot, he's definitely an air breather. As his origin makes clear:

But what about high blood pressure?! Anyway, his parents raise him on a boat and he grows up be a strong swimmer with webbed hands and toes, and... a best-selling author! 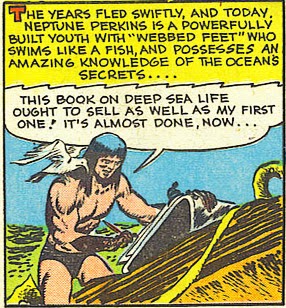 Oh look, he's got a seagull for a pet. That becomes important later - you do remember who's strip this actually is, right? - but before we get to that, we cut to a nearby town where Dick Tracy-type crooks are talking about their next bank robbery. They're led by "Rice" Ryan, a man decidedly obsessed with that particular staple. 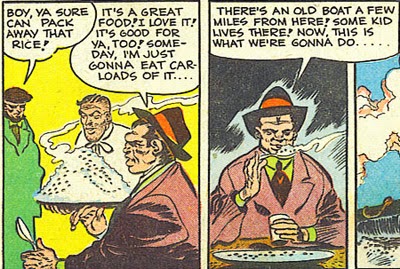 See the plan is simple. Steal Perkins' boat, fill it with rice for the journey to some country without an extradition treaty with the U.S., rob a bank, and escape with the money. And they do trick Neptune, except his wounded gull escapes... 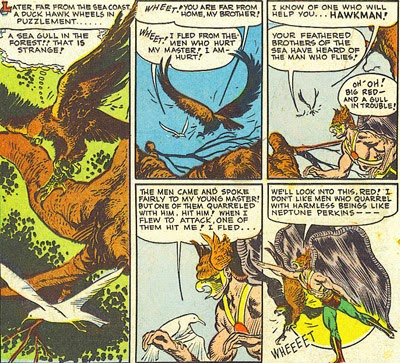 That's right, the gull has a chat with Hawkman's hawk sidekick Big Red and our (real) hero gets involved. He tries to help Perkins steal his boat back, but the crooks are armed and dangerous, and they capture the kid. Hawkman decides to follow one of the crooks to shore, which leads him to the bank robbery in progress. Unfortunately, he's a bit of a klutz.

Hawkman slipped on some rice. Because 1) Rice carries pocketfuls of the stuff uncooked to snack on, and 2) Carter kind of forgets he can fly. While he's knocked out, they escape, so he only catches up to them when they're underway on some rough seas. A wave makes him bump his head again (is he the Golden Age's answer to Hal Jordan?) and the crooks throw him in the hold with Perkins. But don't worry, he has a plan. He takes a crankshaft from a toolbox and starts drilling a hole at the bottom of the ship. 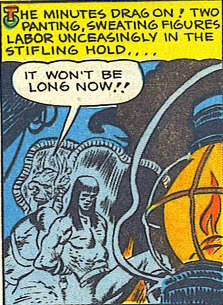 He's not trying to sink the boat. Instead, we see the hull rupture violently, leaving the bound heroes free to cut their ropes on sharp seashells.

So how did Hawkman do it, kids? Did you figure it out? The short of it is: SCIENCE! 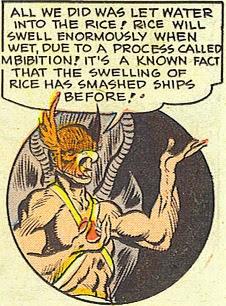 That's right, what little water got in the hold blew the rice up to destructive size. Thank you Neptune Perkins for being there to ask the question for us. As for Rice Ryan, he swore off rice forever. The end. Well, almost. Neptune would return in an adventure involving this same duo traveling to Venus in a light bulb. 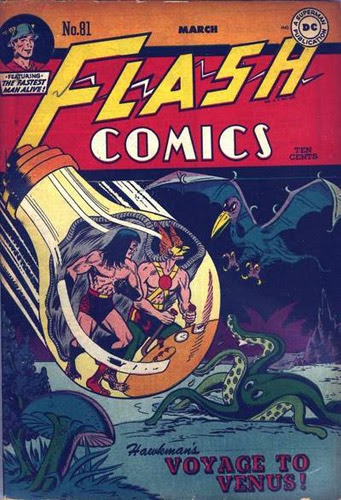 I wouldn't lie about that.

Who else? Between Mysto and Neptune Perkins, the only other possibility might have been Nemesis, someone I'd never heard of at the time, if only he hadn't soon become much more prominent thanks to the Suicide Squad, and later as Wonder Woman's boyfriend. Up next, one last hero from volume 16?
Comics Golden Age Hawkman Who's This?

Doc Savage said…
I always felt bad when Roy Thomas got the rug pulled out from under him with DC and the "Crisis of Subpar Sales as Compared to Marvel." Ruined everything he was doing with All-Star Squadron and Infinity Inc. Young All-Stars was a pretty sorry consolation prize and seemed fairly uninspired.

d said…
I'd like to nominate. All-Star Squadron for a siskoid daily feature after Doctor Who finishes.
January 21, 2014 at 12:43 PM

Siskoid said…
An interesting suggestion, possibly not as daunting as the Legion feature I proposed, and Michael Bailey's Perisphere didn't cover more than 8 issues or so.

Delta said…
Possible post suggestion: "Why we think Hal Jordan is stupid". You mention this a lot, but personally I don't know where it comes from. I guess my basis for the character is the Super Friends cartoon where he had the most authoritative voice, so those comments always give me dissonance. Maybe just a few examples would suffice.
January 21, 2014 at 1:41 PM

Siskoid said…
He's not the smartest guy in the JLA to be sure, but my joke was more about his hitting his head a lot. See SallyP's Green Lantern Butt's Forever in the blog roll (to the right) for all the evidence.
January 21, 2014 at 1:57 PM

American Hawkman said…
Times like this, I wish that DC would hurry up and release the Golden Age Hawkman Archives volume 2... love these stories.

SallyP said…
Delta...Hal isn't STUPID...but he is awfully impulsive. And he does seem to hit his head a lot.

Doc Savage said…
Hal Jordan isn't stupid...his writers are. To be fair, when you make a hero pretty much invulnerable if he uses his brains, it's tempting to write him as stupid to make the story play out as desired.

American Hawkman said…
Hal isn't stupid, especially when compared to the likes of Kyle... but he does have a statistically improbable number of head injuries. Also, a guilt complex that makes Peter Parker look like Lex Luthor.
January 21, 2014 at 8:20 PM

Siskoid said…
Sally: If you mean Perkins, then yes, Infinite Crisis did him in.

Craig: Is that British humor?

Matt: You don't know my players.

AmHawk: You know, Guy's not an especially bright light either. You know what they say about courage and stupidity, maybe the rings can't distinguish between the two.
January 21, 2014 at 9:18 PM

American Hawkman said…
In fairness, Guy seemed just fine until he suffered significant on-panel brain damage back in Denny O'Neal' s run. :) Note also that there was an actual honest-to-God story about how Hal learned common sense in Superboy, of all places.
January 21, 2014 at 11:10 PM

SallyP said…
Hey! Guy graduated with two degrees from the University of Michigan! He just had brain damage for a while...mostly courtesy of Sinestro and Hal. But he has his brains back now.

American Hawkman said…
I actually think Alan is probably the smartest, although he's apparently worse with money than even Hal. I'll note that Guy is clearly the best businessman, on top of his entirely unrelated degrees.
January 23, 2014 at 1:47 AM