Who Was Peter Porkchops Before He Was Pig-Iron?

April 22, 2014
Who's This? Turn to page 8 of Who's Who vol. XVIII and you'll find Zoo Crew member Pig-Iron there. But did you know he had this whole life before becoming a superhero, dating back to the Golden Age? 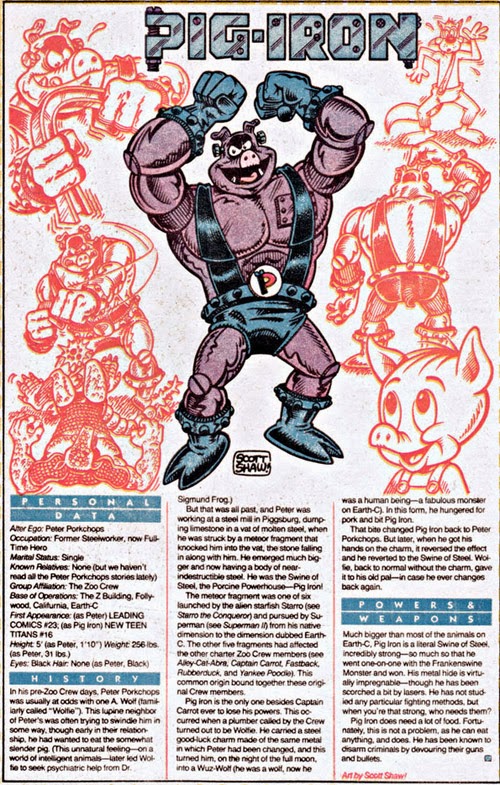 The facts: Pig-Iron started life as funny animal character Peter Porkchops, whose debut on the cover of Leading Comics #23 (1947) would eventually lead to his own series, which would last 62 issues between 1949 and 1960. Falling into disuse like the rest of DC's funny animals, Roy Thomas brought him back in the 80s, gave him powers and made him join the Zoo Crew as Pig-Iron.
How you could have heard of him: If you read any Zoo Crew stories, then you would know Peter Porkchops as his civilian identity, no more.
Example story: Peter Porkchops #2 (1950) by his creator, Otto Feuer 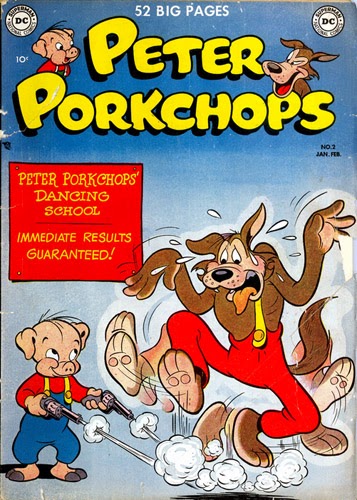 There's nothing particularly remarkable about DC's funny animal comics. They follow tried and true formulas set up by cartoon shorts of the 30s and 40s (Peter Porkchops is obviously meant to appeal to Porky Pig fans), but they're perfectly fine for younger children. Peter's stories are all pretty much the same: His neighbor Wolfie tries to cheat him in some way, and Peter gets the better of him. You'd think Wolfie would try to eat him, seeing as he's a wolf and the pig has a succulent surname, but no, these guys are rather friendly and vegetarian. Take one of the stories from issue 2, as an example: 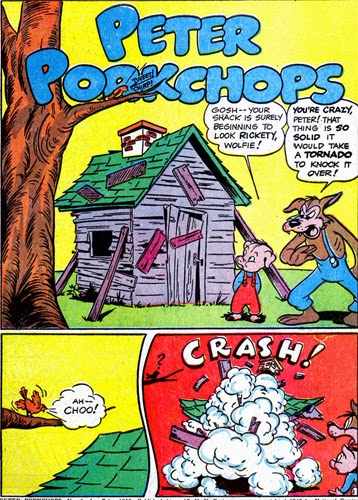 Feuer offers a cute twist on the three little pigs fairy tale, with Wolfie's shack being easy to blow away, and him needing a place to crash for a while (he has a real house in other stories). So of course, he's going to try and squat at Peter's, over the pig's objections: 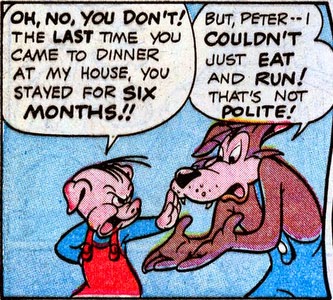 That's pretty amusing. So Wolfie scams Peter into leaving the house in a hurry (free money!!!) and makes himself at home. When Peter comes back (no free money), Wolfie gets a taste of the pig's usual medicine. 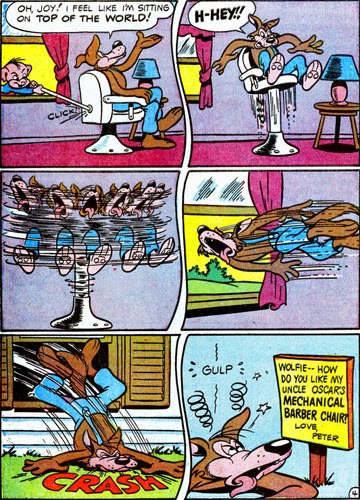 Well-placed signs with explanations written on them is a common trick in these stories, so I guess they're Peter's special cartoon power. He uses it again when Wolfie vows revenge and tries to haunt our porcine protagonist out of his home and gets haunted right back. Who knew ghosts had "territories"? 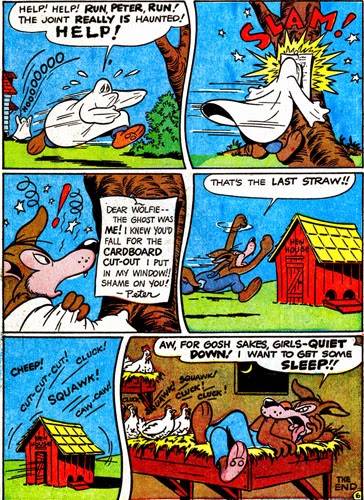 A couple gags, a softballed comic ending where Wolfie admits defeat... that's pretty much how it goes. A collection might well go into my niece and nephew's personal library, though this kind of material has been done better with better-known characters. A Zoo Crew cartoon show would be much cooler, all things considered. I mean, if I'm playing Peter Porkchops' agent. We know Peter returned as Pig-Iron, but Wolfie ALSO made an appearance in that context. In Captain Carrot and his Amazing Zoo Crew #10-11, he got his hands on a magical amulet that turned him into a Wuz-Wolf (a reverse werewolf, he became a wolfish human who wanted to eat other animals).

See? Veggies, the lot of them.

Who else? I'm a little backed-up and I can't do everyone anyway, so one last character from volume XVIII, ok? I just have to decide which VERSION of him I want to cover.
Comics Golden Age Who's This?

Anonymous said…
I shouldn't be surprised, not in the least, that Roy Thomas would repurpose Golden Age funny animals for the Zoo Crew.
April 22, 2014 at 10:09 AM

Anonymous said…
Do you imagine him breaking down in tears in editorial? That's the only way I can imagine the Zoo Crew coming about at all. "Plee-eee-eeez, if we don't do this, nobody will know wh-what happens to Peter Porkchops!"

American Hawkman said…
To read Roy's interviews, most of the time, they came to him and then edited his stuff so heavily that we hardly ever got the full Roy Thomas experience.
April 22, 2014 at 10:21 PM

Siskoid said…
Imagine how opaque they would have been.

American Hawkman said…
There's truth to that, although his essays in All-Star Companion are quite edifying.
April 23, 2014 at 9:31 PM