Who's in the Phantom Zone? Part 1

April 15, 2014
Who's This? There's a two-page spread of the Phantom Zone's denizens in Who's Who vol.XVIII. We're looking at the first half today. 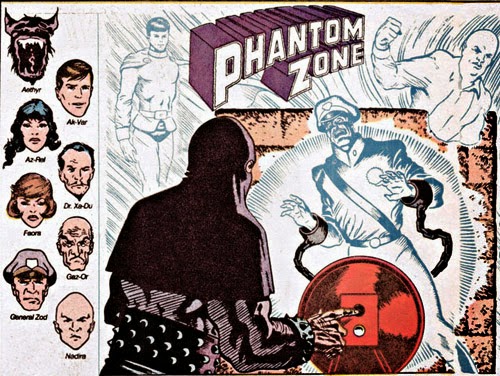 Instead of our usual format, we'll be quickly going through the 8 characters above's first appearance, as a kind of primer on Phantom Zone Villains (and not-so-villains). Who were they and why are they important to the Silver/Bronze Age Superman mythos? And did they miraculously make it to the 21st century in body or spirit? 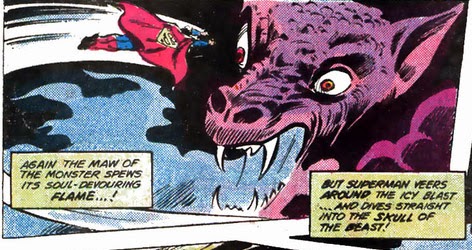 This monstrous entity is late retcon from Steve Gerber's The Phantom Zone mini-series (which I could have covered instead of researching each and every character on here, and saved myself a lot of trouble, but it wouldn't have been much fun). It lives at the deep center of the Zone and creates nightmarish realities for those who dare venture into its domain. The name resurfaced on the Smallville show as the name of the female member of the Disciples of Zod. No relation.

Who's Ak-Var?
He was the Kandorian who took on the Flamebird identity and hanged with the bottle city's Nightwing. I covered that dynamic duo in Reign of the Supermen. He once stole a sunstone, was sentenced to the Zone, but was released after he reformed (is that a pun?).

Who are Az-Rel and Nadira? 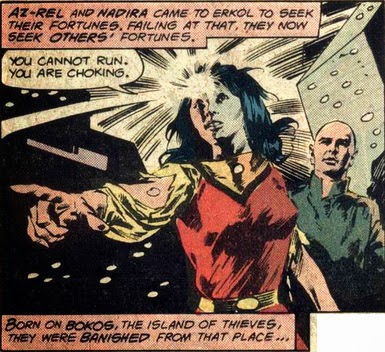 And are they really called that, or have their names been switched? I can confirm they have. The man is Az-Rel and the woman is Nadira, as per the usual Kryptonian nomenclature. Apparently, there were enough name criminals in the Phantom Zone, so Steve Gerber added these two (just so they could get killed trying to escape) in his mini-series. Seems like some Kryptonians had super-powers (besides the stuff they would have gotten by moving to a planet with a yellow sun, I mean). Nadira used psychokinesis to invade people's nervous systems, while Az-Rel was a pyrokinetic who liked starting fires inside people's heads. The two sadists were caught by the Kryptonian Science Police fairly easily on account of their dim intelligence. 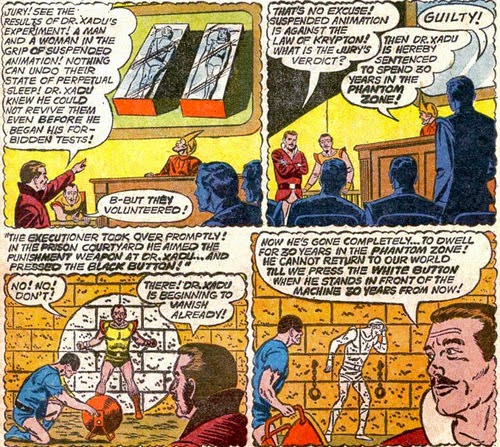 Adventure Comics #283 (1961) marks the very first appearance of the Phantom Zone. In that story, Superboy receives a cache of tech from his father Jor-El (from space, naturally) and proceeds to try it out with catastrophic results. Among these gadgets is a Phantom Zone projector (and he'll spend half the story as a ghost trying to get back to normal) and a thought-helmet that tells him the story of two criminals sentenced to the Phantom Zone. The first of these (so the very first PZ criminal) is Xa-Du, who (GASP!) used suspended animation in one of his experiments! If a 30-year sentence seems harsh, please remember that he then couldn't take those people OUT of suspended animation. Oops! Grant Morrison brought Xa-Du back in his New52 Action stint. 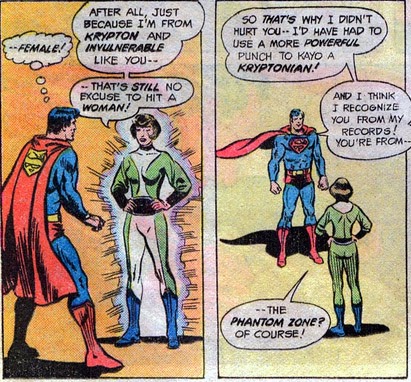 A relatively recent addition to the Phantom Zone cast, Faora Hu-Ul first appeared in Action Comics #471 (1977), where she was the solo villain for a multi-issue story. She's the only PZ criminal who managed to figure out how to switch back and forth between her phantom and solid states. She wound up in the Zone for running some kind of concentration camp for men. Over the years, her name has been changed to Ursa (in Superman II) and Zaora (in Byrne's Pocket universe), but in 21st-century Superman books and the recent Man of Steel, it's back to Faora. 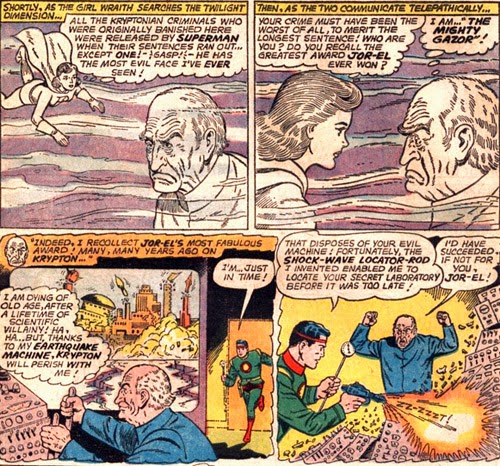 Adventure Comics #323 (1964) features a Legion story in which Phantom Girl enters the Phantom Zone to find the last PZ criminal still in there. Man, Gaz-Or has suffered. Superman let everyone else go eventually, but he's still a captive 1000 years later. What did he do to deserve that? He tried to destroy Krypton ahead of schedule with an earthquake machine. Tsk tsk. He was dying of old age and wanted everyone to die with him. Now he'll live forever... alone. IRONY!!!

Who's asking? After all, we know him well enough to be sick of him by now. He's the best-known Phantom Zone Villain, in large part because of his role in Superman II and Man of Steel, but he's also been a big part of 21st-century Superman comics. Still fun to see how he got in there, and it's this crazy story about building an army of Bizarro duplicates of himself to try and take over Krypton. It was told right along Xa-Du's in Adventure #283, which makes Zod the second PZ criminal ever seen, and certainly the most persistent.

Who else? The other half of the entry of course!
Silver Age Superman Who's This?

American Hawkman said…
Aether' s transformation into the Faora/Ursa role for Smallville was began in the Last Days of Krypton novel... she was a religious cultist named after the monster from the Gerber mini who thought Zod was the messiah. Really good read.

Still so grateful that Faora kept her creepiness in Man of Steel. As the only Phantom Zoner who has the methodology of a serial killer, she's creepy as can be.
April 15, 2014 at 4:57 PM

Jeff R. said…
Quick: During the decade from 2000 to 2010, were there more versions, each completely unrelated to every other previous or subsequent version, of General Zod or Supergirl appearing in the Superman books?
April 15, 2014 at 7:19 PM

Unknown said…
You think these guys are something, Supergirl once ran up against a PZ inmate who was a leprechaun.
April 16, 2014 at 1:15 AM

Bradley Walker said…
The story in question is from Adventure Comics 400-A (Dec 1970),"Return of the Black Flame"

The reviewer at Comic Vine says, "There are so many holes in the plot of the 'Return of the Black Flame' that you could be forgiven for thinking that author Mike Sekowsky had never read any previous Supergirl (or Superman / Superboy) story in his life." And that's an understatement. He doesn't even mention that Black Flame's three henchmen are the Inventor, the Toymaster, and L. Finn -- or in other words, Gyro Gearloose, Winslow Schott and Warwick Davis. This story was also the source of Supergirl's infamous off-again, on-again powers, meant to keep her level with Superman. (This was the period when Supe's powers were (allegedly) halved by the Sandy Superman.)