Who's in the Phantom Zone? Part 2

April 17, 2014
Who's This? And now for the second half of the Phantom Zone entry in Who's Who vol.XVIII. 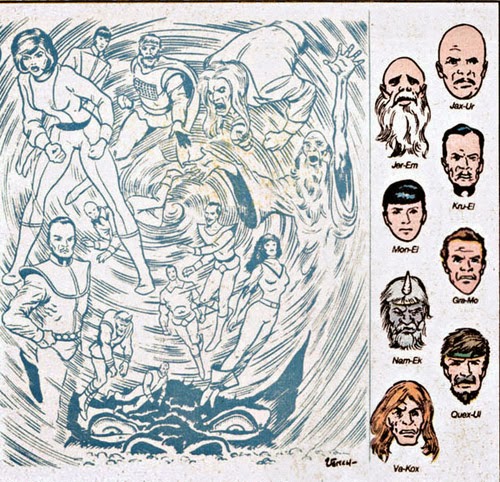 As with Part 1, we're ignoring our usual format to briefly look at the first appearances of the 8 characters above, as a kind of primer on Phantom Zone Villains (and not-so-villains). Who were they and why are they important to the Silver/Bronze Age Superman mythos (if at all)? And did they somehow make it to one of the 21st century's continuities?

Who's Jax-Ur?
His first story was told in Reign of the Supermen, a tale from Adventure Comics #289 (1961) in which he posed as a super-powered Pa Kent. He would return in more modern Superman tales as one of Zod's cronies, appearing on the Superman animated series and in the Man of Steel movie as well. 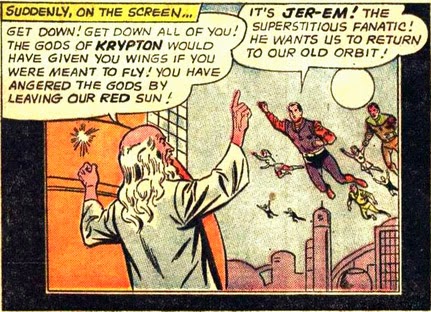 In Action Comics #309 (1964), Supergirl learned all about Argo City's demise. Turns out the flying city was placed around a yellow sun and its people enjoyed new-found super-powers. It was awesome until THIS old crank decided powers were Satan's taint (or the Kryptonian equivalent). Hypocritically using his powers to divert the city back to a red sun, the Argonauts lost their powers and sentenced him to 30 cycles in the Phantom Zone. Harsh? Yes, but not in hindsight. Seems like he stranded Argo in some kind of radiation belt that doomed its citizens. Supergirl's parents survived by shunting themselves to the Survival Zone (another Phantom Zone, out of phase with the prison dimension), but the process didn't take effect before they'd sent their infant daughter off in a rocket. Supergirl encounters old Jax-Ur in the PZ where he feels really guilty about the whole thing. He was about to commit suicide after being freed, in the Steve Gerber mini-series, when he was instead killed by fellow convicts. 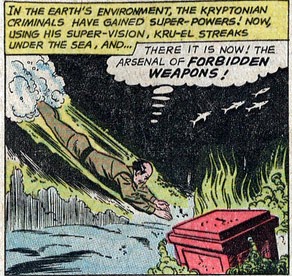 Superman's evil second cousin was first seen in another Supergirl story, this one in Action Comics #297 (1962), when, along with Jax-Ur and Zod, he was freed from the Phantom Zone by an evil Kandorian. Kru-El knew all about the Kryptonian arsenal sent behind Superbaby by Jor-El, and rescued it from its ocean tomb, killed the Kandorian villainess with a disintegrator gun, and was eventually stopped and sent back to the Zone by Supergirl. He would appear fairly frequently through pre-Crisis continuity as one of the main four Phantom Zone Villains usually causing trouble. Presumably because his name is such a cheesy pun, he has appeared much less in post-Crisis continuity (like, twice maybe).

Who's Mon-El?
Another character discussed in Reign of the Supermen, with Zod, arguably the best known inhabitant of the Phantom Zone (at least, in comics fan circles). He's been a high-profile member of the Legion of Super-Heroes since the early 60s, the only character on the list to get his own entry in Who's Who, and even took over Action Comics for a while in the more recent past. 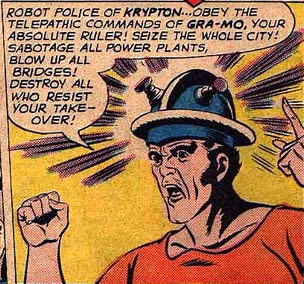 In a story revealing new details about Jor-El's life in Superboy #104 (1963), we find out the Kryptonian council runs a kind of Dragons' Den competition in which they decide just which inventions will become a part of the planet's social fabric. When Jor-El wins for the Phantom Zone projector, rival scientist Gra-Mo (whose invention was a servile android race) goes crazy and along with his "evil assistants" and tries to take over the planet. The damage they caused means the PZ projector can't be used to make them the first criminals in history to be banished to Zone, so the old suspended animation in orbit method is used. When Krypton blows up, they're pushed towards Earth and eventually come to blows with Superboy. He finally got to the Phantom Zone for his trouble, and I don't think he ever appeared again.

I.e. the weird guy with the unicorn horn. What's THAT all about? As revealed in Untold Tales of Krypton, Superman #282 (1974), he was a Kryptonian scientist who tried to give himself immortality by drinking an extract made from the healing horn of the Rondor, one of those crazy Kryptonian animals. His change in appearance was an unforeseen effect and that cost for immortality too high. Shooting the horn off didn't work, as it made him invulnerable to physical damage and illness. Isolated for too long because of his monstrous looks, he went kind of insane. Krypton blew up, and he survived. The story ends with him crying in space for all eternity. Except some pirate eventually picked him up, and he naturally gravitated towards the Last Son of Krypton and he too was rewarded with a trip to the Phantom Zone. His name's been used as a go-to for live action Superman stories when they've needed a Kryptonian with a strange appearance, as one of the Disciples of Zod in Smallville, for example, and as that big armored dude in Man of Steel. 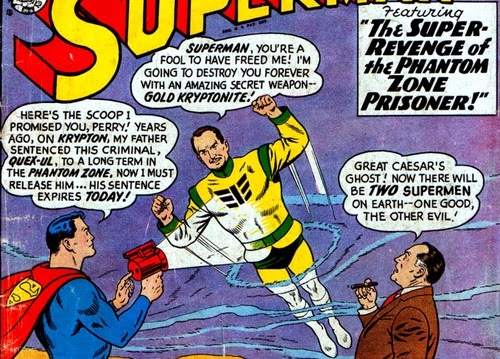 In Superman #157 (1962), the Man of Steel is pressured (by phantom voices) to release this guy whose sentence of 25 cycles (18 of our years) is up. Once he is, he of course attempts to get revenge on the House of El for being falsely accused and condemned. But wait! It wasn't his fault after all! Somebody else poached those poor Rondors and then hypnotized him so he'd confess! Well, feeling bad about the Gold Kryptonite he'd prepared for Superman and Supergirl, he throws himself into it instead, saving the Survivors of Steel and rendering himself both powerless and somehow amnesiac. So Perry White put him to work in the Daily Planet production office. Seemed like the thing to do. He would eventually sacrifice himself to save Superman in The Phantom Zone mini. John Byrne used him (strangely) as one of the Pocket Universe Kryptonian villains Superman had to execute, and he returned on "New Earth" as one of Zod's sleeper agents.

Who's Who misattributes this one's first appearance as Superboy #104, but it's actually Action #284 (1962) that Professor Va-Kox first shows. He was arrested and "jailed" for creating awful sea monsters, and if he ever gets out, you can bet your life he's going to ravage the Earth the same way. In every story he appears in, he's basically just hanging out with bigger names. Perhaps he's hoping Dr. Xa-Du or Jax-Ur's fame and success will rub off on him. Yeah, maybe not.

Who else? I was probably going to go western, but then I had any idea for a very different genre character.
Comics Silver Age Superman Who's This?

SallyP said…
I had no idea that there were that many people in the Phantom Zone. Between that and the bottle city of Kandor, which I have probably misspelled...and Superman and Supergirl and Power Girl, and Krypto and all the Superpets...there are a LOT of Kryptonians floating around!
April 17, 2014 at 10:47 AM

Siskoid said…
You spelled it correctly!

American Hawkman said…
I'll point out that Nam-Ek as "tall brutal Zod enforcer" was started in Last Days of Krypton, where they repurposed the name for their Non equivalent, although they did make him Rondor-obsessed for good measure.

I live for the day when Dr. Va-Kox breaks out, makes his monsters, and Aquaman controls them into beating him down before he stands a chance. :)
April 17, 2014 at 8:28 PM