K9 the Series: The Character Sheets

June 27, 2014
In the spirit of each successive series seen as a Doctor Who RPG campaign, John, Keegan, Philippa, Daniel and Robert have handed in their character sheets at campaign's end. We start with John's K9 Mark 2: 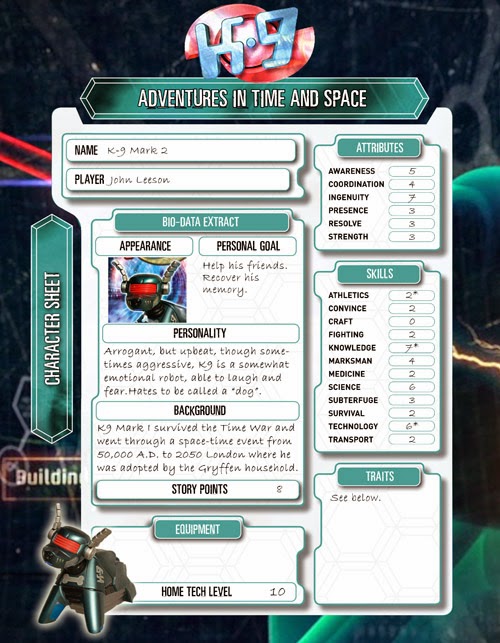 BAD TRAITS
Adversaries (Major) - Drake, Thorne, the Korven
Amnesia (Major)
Argumentative (Minor)
Distinctive (Minor)
Impulsive (Minor)
Trade Value (Minor) - Some at the Department would like to strip him for parts
Weakness/Low battery (Minor) - When K-9 rolls double "1"s on any roll of a physical nature (like using his nose laser or rolling down a hill), his batteries run low. Unless he finds a power source (the TARDIS will do), his physical Attributes and Skills will all drop to 1, and further drop to 0 if he make another roll of a physical nature above Average difficulty.
Weakness/No limbs (Major) - K-9 cannot pick up things (no hands or arms).

SPECIAL TRAITS
Feel the Turn of the Universe
Robot
Special: K9 can regenerate from death/destruction thanks to a mechanical "regeneration unit".
Telepathy (Major) - K-9 can interface with machines, but not human minds.
Vortex

FAVORITE METHOD FOR ACCUMULATING STORY POINTS
Though there are some points to be wrung out of misunderstanding human idiom, K9 banked the most points from his Amnesia Trait. Since his past was a blank slate, he would never know if any given alien coming through the spacetime manipulator behind him would be friend or foe, nor if they were lying or telling the truth about the details of his life. 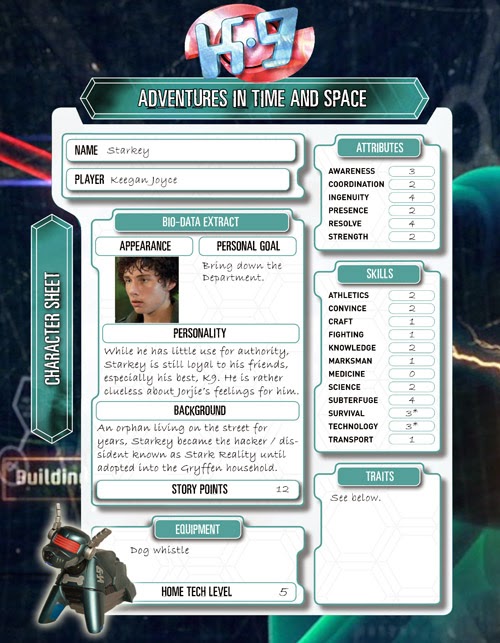 FAVORITE METHOD FOR ACCUMULATING STORY POINTS
Starkey lets his friendships drive his Impulsive Traits, getting him (and them!) into trouble by barging in without a plan. Hopefully, the Story Points thus accumulated can be used to get them out of it. 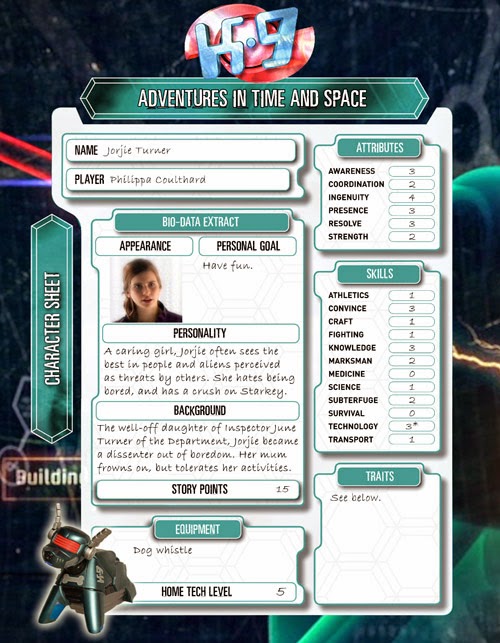 SKILLS
*Jorjie has a +2 Technology Expertise in Hacking.

BAD TRAITS
Adversary (Minor) - The Department (but not her mum)
Code of Conduct (Minor)
Impulsive (Minor)
Obligation (Minor) - Jorjie is still in school, and her mother insists she goes

FAVORITE METHOD FOR ACCUMULATING STORY POINTS
Jorjie's relationships are her main source of Story Points. Disobeying her mother and getting caught in the middle of an unsupervised adventure, for example, or getting the cold (clueless) shoulder from Starkey, or giving the benefit of the doubt to some ambiguously threatening NPC. 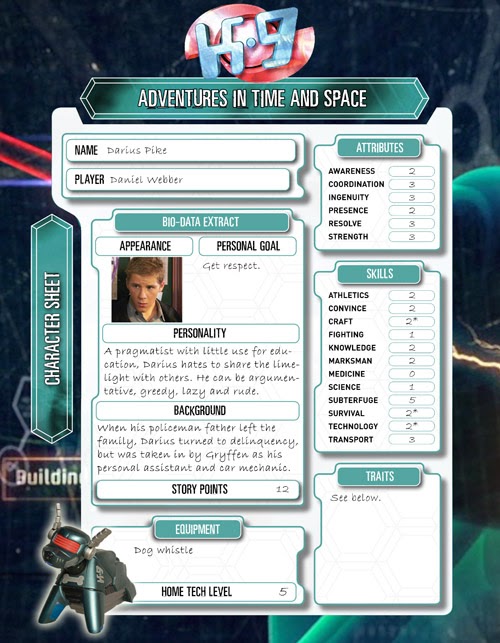 FAVORITE METHOD FOR ACCUMULATING STORY POINTS
Darius is likely to betray K9 or Starkey to the Department, out of mistrust, bitterness or jealousy, but obviously, his player knows they're all working towards the same goals. But acting as an antagonist can definitely be worthwhile, Story Point-wise. 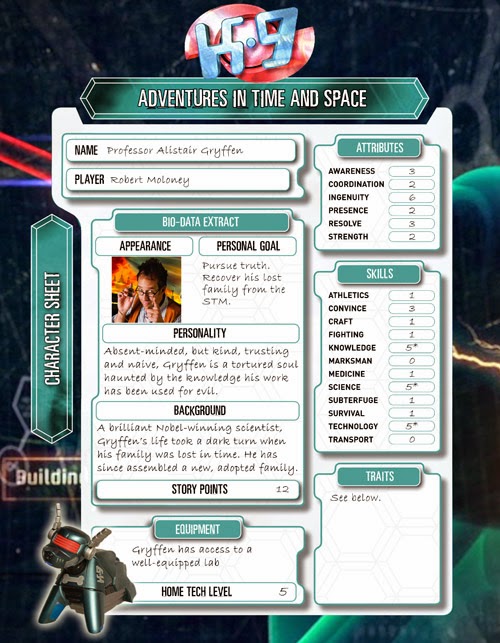 FAVORITE METHOD FOR ACCUMULATING STORY POINTS
Professor Gryffen will often be giving his undivided attention to some experiment and neglect what is happening around him, whether that's the kids' personal drama or the STM spewing out aliens in the next room. As you can imagine, this creates opportunities for major oversights, misunderstandings and chaos, and therefore, Story Points.