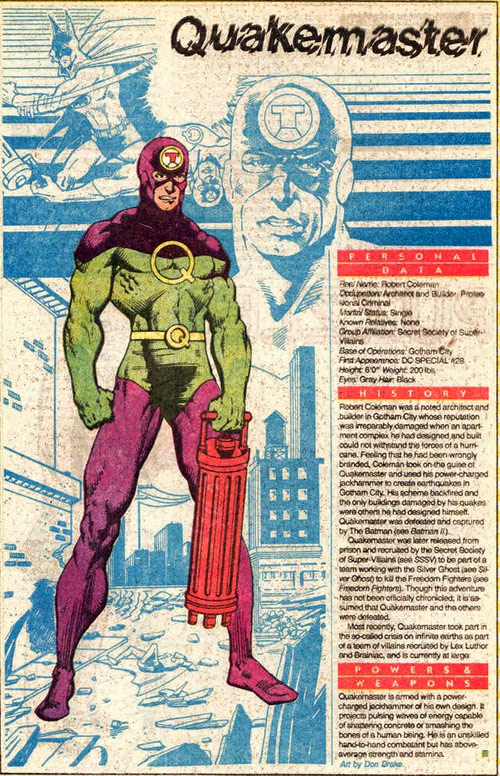 The facts: Quakemaster's first appearance in the disaster-themed DC Special #28 (1977) had him square off against Batman, and technically, before Who's Who, THAT'S IT. What? you ask, wasn't he also a member of the Secret Society of Super-Villains according to that self-same comics encyclopedia series? That's why I said "technically". SSSV was cancelled before he made an appearance, so really, his stint as a member of the team was only to be found in Cancelled Comic Cavalcade #2 (not a huge role, but he gets to ride Killer Moth like a flying horse for the better part of it). And ok, he was in Crisis, but who wasn't? If he hadn't shown up in Who's Who, I think it's doubtful we would ever have seen him again.
How you could have heard of him: In the post-Crisis DCU, he's been used here and there as part of a larger group of C-listers - Manchester Black's in Adventures of Superman #608, a new SSSV in Infinite Crisis, and most famously, a patron of the supervillain bar who loses his equipment to Wally Tortolini in Justice League America #43. He's probably the Quakemaster who goes up against Hero Hotline (different look, but written by his creator Bob Rozakis too). His name was also used by the Ventriloquist in the Cataclysm storyline, the one with the big Gotham earthquake.
Example story: DC Special #28 (1977) by Bob Rozakis, John Calnan and Tex Blaisdell 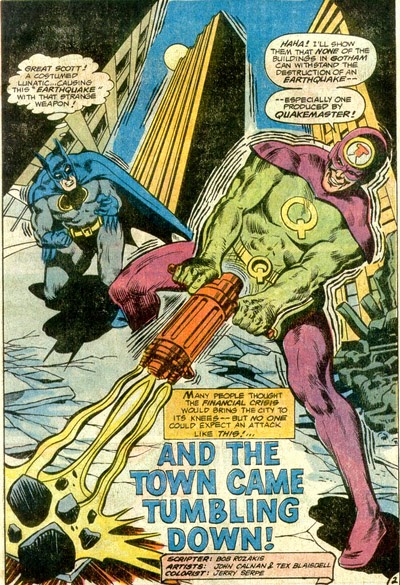 DC Special was mostly a thematic reprint series, but towards the end, it did feature some original material. #28's theme is "Earth Shattering Disasters" and features three cataclysmic stories starring Batman, Aquaman and the Legion. Only the first of these interests us. Well, "interests" is a mighty big word. Still, it's not every day the Batmobile gets smushed by a falling building. 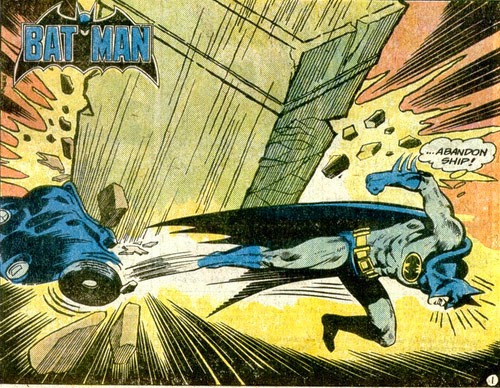 But this is clearly impossible, because Gotham is built on bedrock and there shouldn't be any earthquakes there (and yet...). I mean, that's gotta be the reason so many people want to live there despite it being a crime-infested hell hole, right? Supervillain shenanigans suspected. Batman has a first encounter with the man responsible, one Quakemaster, and barely escapes with his life as concrete rains from the skies. The Bat walks back to the Bat-Cave (so no hurry then) to get a new Batmobile AND check his files. And that's when I "got it". Why an earthquake-themed villain for Batman? Because it would put his HQ at risk.

There's an extended sequence of Batman crawling out of the Cave via the famous fireman pole shaft, but not before a) he's checked his files and figured the whole thing out, and b) he made a mental note to ask Superman to rebuild his digs (what are friends for if not abusing their powers?). Still didn't get a spare Batmobile, so this time he hitches a ride with some cops and goes straight to where he thinks Quakemaster might be. It's all deduction, really: 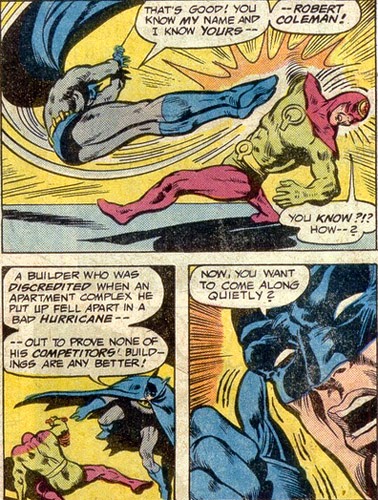 Well of course! We could have figured it out too if we were as well informed on the disgruntled engineer set. Just how powerful is Quakemaster's jackhammer? Well, it's taking down buildings and causing rock falls in a cave miles away in the suburbs, but it doesn't do much against Batman's thoracic cage. 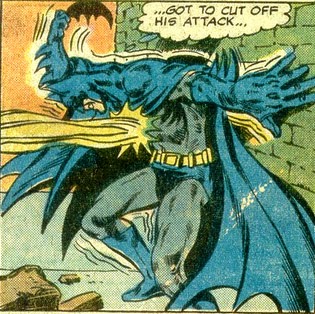 So which is it? Cataclysmic or Vibe-level? As Batman finally punches Quakemaster out, we find out the truth: 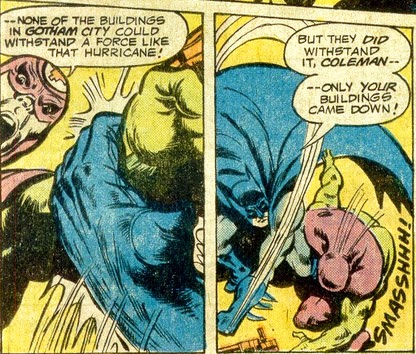 Oh the irony! Coleman's buildings were so badly built, they're actually weaker than Batman's ribs! Only his fell down, thereby proving without a shadow of doubt that his work really was inferior. Ah well. One for the DCU's equivalent of America's Stupidest  Criminals. Makes me wish he'd joined the Suicide Squad...

Who else? We're heading for the Golden Age and a character that wasn't originally DC's.
Batman Comics Who's This?

snell said…
I would imagine that Batman has a file on every disgruntled employee. Given the frequency with which they turn super-villain, it's quite a time-saver...
June 11, 2014 at 9:42 AM

American Hawkman said…
Seriously. I actually liked Quakemaster though. It's rare to see such a simple mass-obstructionist.
June 11, 2014 at 1:07 PM

Jeremy Patrick said…
I love that he has a "Q" not only on his chest, but also on his belt buckle. Super-villains back in the day were really concerned with giving bystanders hints as to their identity; the apotheosis of this trend was Galactus, a cosmic entity that comes from the universe prior to the Big Bang, having a big "G" on his belt . . .
June 12, 2014 at 8:35 PM