Who's the Red Bee? The facts: The Red Bee first appeared in Quality Comics' Hit Comics #1 (1940) - as cover feature, no less! - and would sustain a strip through #24 (1942) until disappearing for decades and showing up in very small roles in All-Star Squadron (where Roy Thomas shuffled him off the Freedom Fighters).
How you could have heard of him: As a long-running joke or someone's personal obscure favorite, perhaps. And that's true of comics writers too. Grant Morrison is in the former camp, making him as a denizen of Limbo in Animal Man, and an old buddy of Plastic Man in JLA. James Robinson uses him more seriously in Golden Age and as a ghost in Starman. Still, nothing major. More recent Freedom Fighters comics gave the name to an insectoid female hero/villain.
Example story: Hit Comics #13 (1941) by Toni Blum and Witmer Williams (all or most of his strips were, regardless, signed by the pseudonym B.H. Apiary) 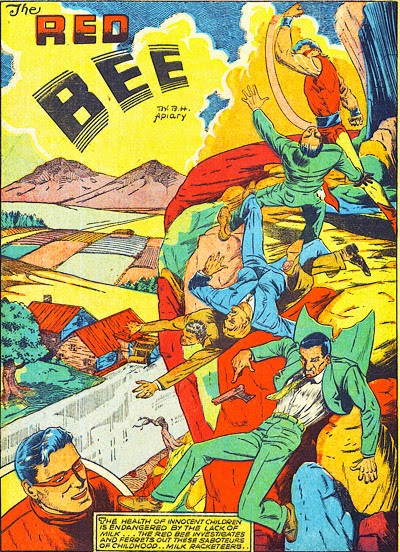 So, Golden Age, you've chosen to play your milk racketeer story completely straight. Okayyyy*. Let's see how that goes. The villains' nefarious plan begins with a simultaneous attack on a milk train AND a convoy of milk trucks. Looks like Superior City (a town with no inferiority complex) loves its milk! 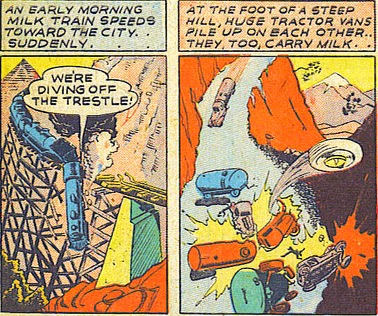 Dairyton Milk soon calls the D.A. and his assistant (who unbeknownst to anyone, is the gauze-sleeved vigilante we call the Red Bee) to complain. Rick finds a microphone in the C.E.O.'s office which attracts his attention to goons in the street outside listening in. Milk racketeers! He springs into action with his trained bee Micheal. 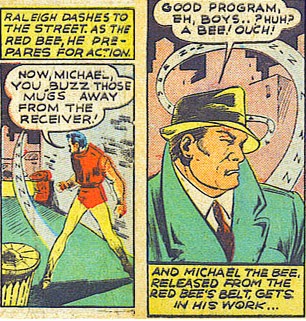 Yes. The bee in his belt is called Michael. That's something Who's Who fails to mention. I wonder why. Red Bee wins the fight, but the goons don't know anything and Rick leaves before the cops arrive. Cue "spilt milk" joke. 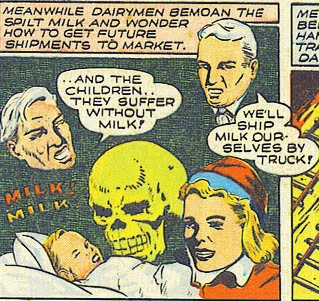 Did the milk lobby own part of Quality Comics? Sheesh. Without milk, ALL THE CHILDREN WILL DIEEEEEE!!!! On a hunch, the Bee goes into the surrounding "rich dairy country", and it pays off because more racketeers are heading out to wreck every dairy farm in the area. Michael the Bee makes a couple of their cars lose control, but there are more guys out there breaking barrels and setting fires (no cows appear to be harmed in the making of this story though). The Red Bee needs reinforcements. Here's something else the Who's Who entry didn't prepare me for:

It's possible this changed in later stories, but here, the only trained bee in his belt is Michael, and it's up to Michael to go to "the beehives" (Red Bee keeps them somewhere, or ANY beehives?) and convince other bees to help. Stung and punched into defeat, one of the racketeers gives the hide-out up, an old mill by the river. (All old mills should be demolished right away; nothing good ever happens at an old mill.) At the mill, Rick realizes the plot is even more nefarious than previously believed. 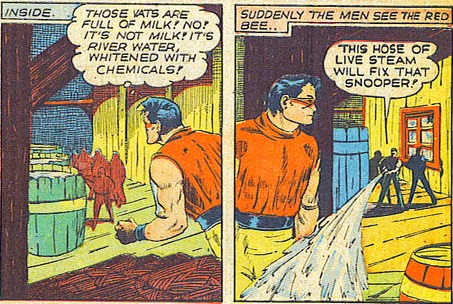 White water? Fake milk? DEAD CHILDRENNNNNNN!!! And while you'd think "live steam" would be a good weapon against a guy who uses weaponized bees, the racketeers completely miss the mark and get stung. And punched. And punched. And punched again. There's an awful lot of punching for such an efficiently told story (6 pages). The Red Bee wrecks the operation, but as he ponders how these racketeers were going to sell their wilk (patent pending), a car drives in. It's the president of Dairyton Milk! 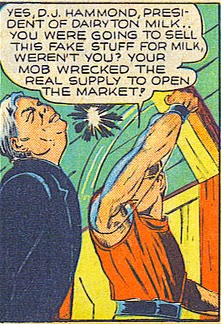 Well obviously. But you do realize there's still going to be a major milk shortage, right. THE CHILDRENNNNNNN!!!!

Hercules, X-5 Super Agent, Jack and Jill, The Strange Twins, The Old Witch, Bob and Swab, Blaze Barton, the Great Defender/Stormy Foster, Betty Bates, Comet Kelly, the Ghost of Flanders, Captain Flagg, Don Glory, Lion Boy... Until Kid Eternity took over the book with #25, it seemed "Hit Comics" was unable to produce a character with as much staying power as the Red Bee! Only Neon the Unknown has arguably done as well (as the name used by a character in the modern Freedom Fighters), but I wouldn't take Neon's side if there's an argument about that. Really says something about the first two years of this book, doesn't it?

Who else? Moving over to Golden Age Fawcett Comics, I'm skipping to Who's Who vol.XX to do so.

*Milk racketeering IS a real crime, I know, but it still sounds incredibly silly. Google's first hit links to a 1933 case.
Comics Golden Age Red Bee Who's This?

Siskoid said…
You know what happened? Kid Eternity's retrofit into the Marvel Family. Sorry about the confusion.
June 16, 2014 at 7:36 AM

Martin Gray said…
Brilliant piece, thank you. I wonder if Roy Thomas has ever interviewed anyone involved, to ask what they were on.

Anonymous said…
I had occasionally heard mention of Michael the Bee, the super special bee friend of the Red Bee, but I always assumed that was exaggeration for comic effect. No, I guess not. Good God.
June 16, 2014 at 10:26 AM

The Irredeemable Shag said…
Great coverage for a deserving character! Red Bee is one of my favorite obscure characters. Thanks for the closer look at one of his classic adventures. Michael is a hero to us all!
June 16, 2014 at 11:04 AM

snell said…
Let us hope the nu52 never turns their attention to the Red Bee, for the would undoubtedly decide that Michael was really a Daemonite creature who turns on and the Red bee and bites his arm off...
June 16, 2014 at 11:35 AM

merb101 said…
Red Bee was killed by the villain Blitzkrieg in All-Star Squadron #35. Bee was outclassed but fought Blitzkrieg to buy the Freedom Fighters more time, and the bad guy eventually broke the Bee's back on a large piece of concrete rubble. It was pretty graphic.
June 16, 2014 at 11:37 AM

Wayne Allen Sallee said…
Thanks, Siskoid! I asked you to profile this guy in the way back! If my memory serves, bees can't see the color red, so this makes the character even more absurd.

Red Bee would have been Quality, since those characters became the Freedom Fighters under Roy Thomas. He also killed a bunch off when Pearl Harbor was bombed, like Neon the Unknown.

James Robinson, once I read Starman in trade straight through, was primarily using Quality heroes and villains.

I want an Earth 2 Red Bee and he should appear in Future's End and even Batman Eternal. We should even have a book called Red Bee & The Outlaws.

American Hawkman said…
Bees not being able to see Red was apparently part of the point, according to Plastic Man. I'll also point out that the Red Bee has died three times on panel with no resurrection. Personally, I assume that Michael is the one that has superpowers, and he'll go find another patsy to put on the tights whenever a Red Bee is killed.
June 16, 2014 at 6:50 PM

Jeremy Patrick said…
And yet TO THIS DAY my scripts involving bees and milk racketeering are returned, unread, by all the major comic book companies in the world . . .
June 17, 2014 at 3:21 AM

Bird of Paradise said…
Red Bee one of those totaly geekie types of crime fighting type in the early years
January 28, 2018 at 12:38 PM