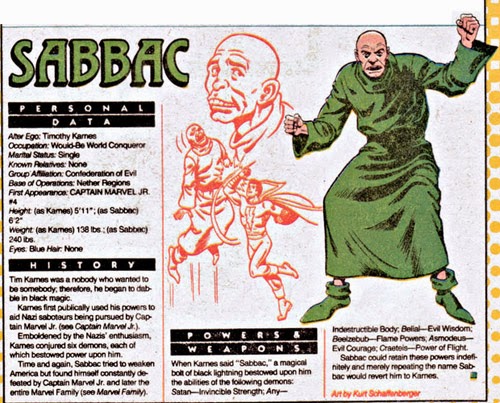 The facts: This satanic Marvel Family villain first appeared in Captain Marvel Jr. #4, with a follow-up in #6 (both 1943), and would not reappear until 1981! That was in World's Finest Comics #269 (a Jr. solo story), with another appearance a year later in Adventure Comics #491-492. Then Who's Who, and then another 18 years' wait.
How you could have heard of him: Sabbac was reintroduced in 2004's Outsiders #7, where Judd Winick revealed him to be Freddy "Cap Jr." Freeman's foster brother - his origin told in the Superman/Shazam! mini the next year - but by the next issue was replaced by a new, more demonic-looking Sabbac, Ishmael Gregor, who went on to be featured later in the series and in 52.
Example story: Captain Marvel Jr. #6 (1943) by Otto Binder and (probably) Al Carreno 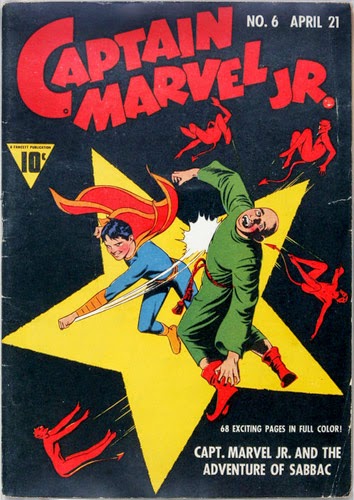 This is Sabbac's second story, so it starts with him in jail, with a prayer book. A SATANIC PRAYER BOOK! I don't think the Who's Who entry does his core concept justice. Here's the page where he says his magic word. It's AMAZING. 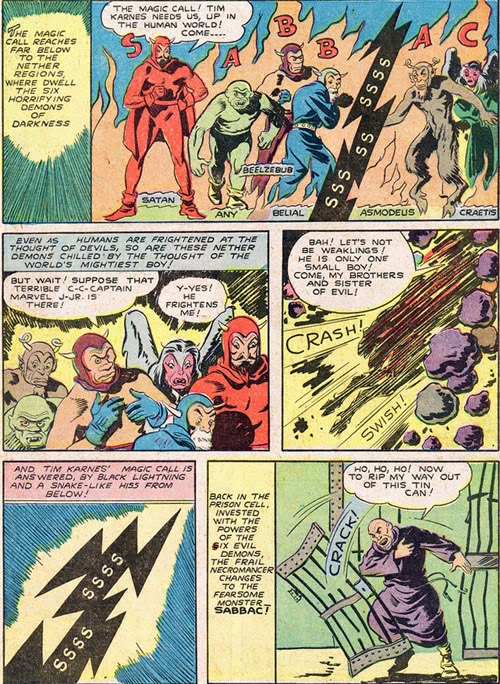 His name is, Shazam-like, an acronym of the demons who give him his powers, right? Awesome hings that were undersold:
1. Satan (HIMSELF!) is basically a guy in a Halloween devil costume.
2. There's a demon called "Any". I've never come across the name in my demonology studies, so I'm guessing this is a rotating spot for, literally, ANY demon who wants to give Sabbac a little juice.
3. They're not keen on helping Sabbac because they're scared shitless of Captain Marvel Jr.! Hilarious!
And 4. The lightning climbs UP from Hell to strike Sabbac and give him his powers! The demons actually travel along the lightning to "possess" Sabbac.

Junior fails to foil his escape because Sabbac can burrow through rock and visit Hell personally to have conversations with his dark princes. They remind him that it's not use being out of jail if Captain Marvel Jr.'s gonna put him right back in again. What he needs is a plan. And his trusty book of black magic suggests one!

FACT: Nightmares are caused by demons. FACT: Nightmares can cause death (I'm in trouble, folks). AND FACT: Nazi contracts don't have any fine print. Or any print at all. Satan doesn't see it:

You'd think Satan would be pretty familiar with Hollywood, or perhaps this is the origin of his close affiliation. In any case, Sabbac sets up Nether Studios to create short, nightmarish films IN HELL he can then project into people's heads with his Nightmare Projector(TM). But whose? His target is pulled from Hitler's Black List: The United Nations General. No, I didn't forget to put the word "Assembly" at the end there. He's actually a military man in charge of Allied forces. Violently tortured by demons in his Sabbac-crafted nightmare, the general has a heart attack, in his last moments moaning Captain Marvel Jr.'s name! And some dreams come true. 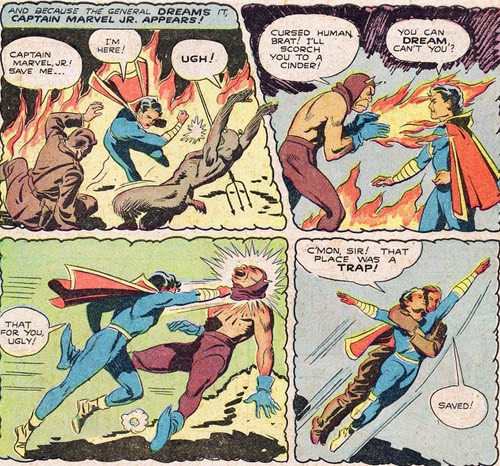 The magic of Shazam apparently makes it possible for the dreaming Freddy Freeman to enter other people's dreams when called, so Sabbac must defeat him first. He projects the same film into Freddy's dreams and the boy hero finds himself not only in hell, but incapable of saying his magic words! They always come out as Sabbac, which naturally, turns him into Sabbac Jr.!

They might have made his costume (or teeth!) more like Sabbac's, but you'll note the crazy horns and cloven feet. Demon power has its uses, but as Sabbac JUNIOR, he's of course weaker than the real deal. Turning back into Freddy doesn't help, and Sabbac leaves him in the dream, defeated, taking his film to a movie theater for its big premiere. After breaking the projectionist's neck (no really, Sabbac is a lot more fearsome than Who's Who's led me to believe), he shows the 1943 audience sights they were never prepared for. 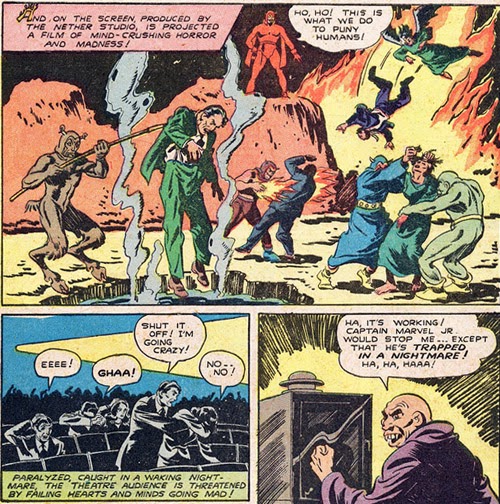 Their cries wake Freddy up and as Captain Marvel Jr., he destroys the movie screen and saves them. He then proceeds to punch the demons right out of Sabbac:

One after the other, they all jump out of their host because even Satan hates to be punched by a youth that's pure and true. LESSON LEARNED!

I wonder why Sabbac didn't return more often, though I guess it was relatively rare for villains to recur during the Golden Age. As one of the reverse-Marvels (he's pretty much Junior's version of Black Adam), he should have had more play. My working theory was that maybe by the time it would have made sense to use him, the Comics Code was too strict for a demon worshiper. Except Captain Marvel and friends stopped publication before the Code, and started up again in 1973, when the Code was definitely more relaxed. I guess he just fell between the cracks.

Who else? Haven't done a historical hero in a while, have I? Maybe I should.
Captain Marvel Comics Golden Age Who's This?

Anonymous said…
I put it to you that Sabbac was the (conceptual) junior counterpart to Ibac. We think of Black Adam as the classic Captain Marvel villain, but he got a lot less play back in the day than Bronze age and later stories would have you believe. Black Adam got seriously promoted as "the" CM villain, probably because guys like Ibac and Mister Banjo are pretty hard to take seriously.
June 18, 2014 at 10:32 AM

Michael Hoskin said…
Sabbac's power source is more gender-inclusive than Captain Marvel's? It almost sounds like a victory 'til you think about it... the one who gets power from a woman is evil.
June 18, 2014 at 11:30 AM

American Hawkman said…
Sabbac is actually a pretty cool villain. I do admit that I like the Russian Mobster version as much as the original. Sabbac had as many Golden Age appearances as Black Adam did, but it's a shame that he missed the 70s revival.
June 18, 2014 at 2:43 PM

Jeff R. said…
Other sources appear to have "Aym" in the first A slot, which does show up in some other demonological contexts, but both Who's Who and the book you're scanning goes with "Any". Wonder when Aym first got subbed in there...
June 18, 2014 at 6:04 PM