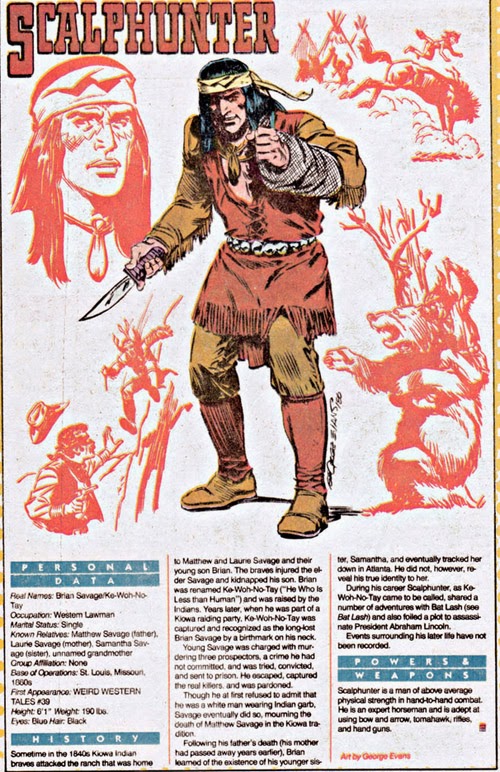 The facts: Created by Michael Fleisher and Dick Ayers in Weird Western Tales #39 (1977), Brian Savage AKA Ke-Woh-No-Tay AKA "He Who Is Less Than Human" AKA Scalphunter went on to star in that book until its end with #70 (1980), replacing Jonah Hex who was setting off for his own book. A headliner for three years, it's odd that we don't know him all that well today, though perhaps this is because he wasn't born of western comics' heyday, but rather in the dying days of the genre. He still managed to guest-star with Batman in Brave and the Bold #171.
How you could have heard of him: James Robinson notably used him as part of Opal City's history in Starman, and presented the idea that one of the O'Dares was Brian Savage reincarnated (and so might Star Boy). He also established Scalphunter's legacy by making Balloon Buster Steve Savage his son (third in the line of heroes, since Matt Savage - Trail Boss was Brian's father). Scalphunter also appeared in The Kents, and was a most recently a Black Lantern in a special revival of Weird Western Tales (#71). Brian Savage has also made appearance all over the modern DCU, in Superman/Batman, Guy Gardner Warrior and the most recent Jonah Hex series.
Example story: Weird Western Tales #69-70 (1980) by Gerry Conway, Dick Ayers and Romeo Tanghal
Gerry Conway wasn't the first to chronicle Scalphunter's adventures, but he was the last to do so regularly and, as often happens with stoic, silent heroes, the stories were accompanied by a novelist's narration, not too purple, I think. Just right. Fleisher wrote the feature less internally until issue #44, so I'd say Conway left more of a stamp on the character. 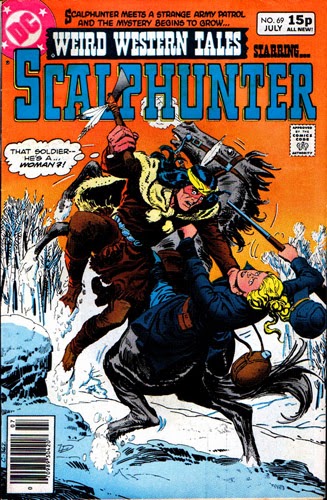 That cover's a big spoiler for the story, though a surprise remains: "Jase", the Union's only female soldier, actually has black hair. Oops! Anyway, Conway gives this information up early, and it's pretty obvious from the art even before her lovely locks spill out from under he cap. Hairdressers are hard to come by in Civil War era America! Our man Brian Savage, raised as a Kiowa Indian, is serving as scout for a group of Union soldiers and that's why we're even talking about Civil War haircuts. So cue some scout badassery: 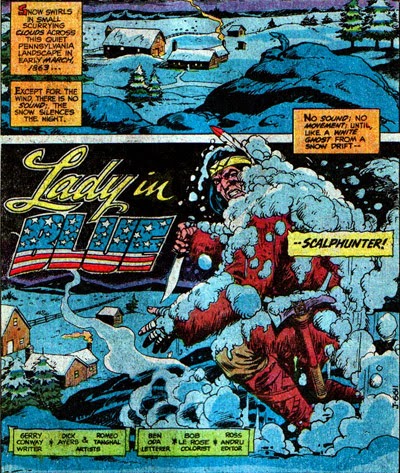 Scalphunter's world is a rather dark and violent one, and we learn early on that one of the group, Wilks, is a dangerous killer, which makes it even more imperative Jase isn't found out. Savage discovers her secret on page 5, but kindly keeps it. Wilks' true colors are soon shown when the blue tunics invade a Confederate farmhouse and he has a jolly good time massacring everyone inside. 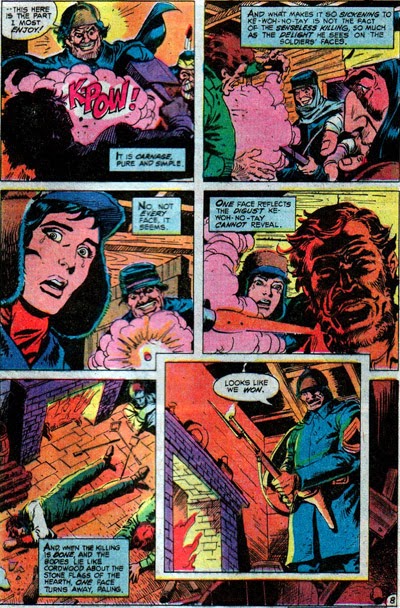 Burning it down to the ground, Wilks then gets a craving for BBQ. He's evil. You sold on that? They reach a Union camp in Pennsylvania by morning, and Jase gets to tell her story. Taught be her father to shoot, ride and fight, she eventually joined up when her brothers came back in caskets. She cut her hair (since grown back), took their clothes, and was glad she was a petite woman like her poor dead ma. Good she may be, but she's still a bit of a klutz. 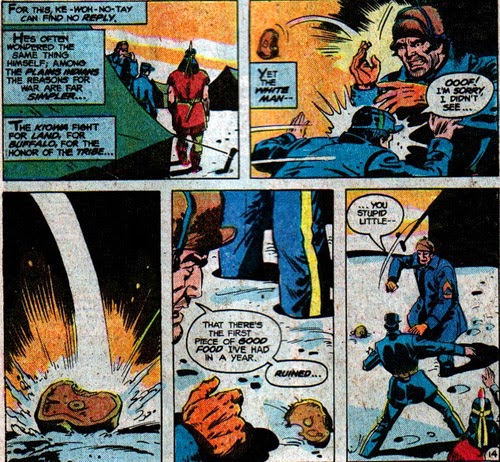 Apparently, Wilks has never heard of the 5-second rule. And I mean, his lunch fell into snow, nature's refrigerator. I guess he's just spoiling for a fight. And when Scalphunter gets in there to help the over-matched Jase, it all goes pear-shaped... and more than a little rapey.

If Scalphunter was something of a soulful and mostly silent observer through most of Part 1, the second issue sees his spring into action (though always with the help of Jase, who's proving to be quite the feminist icon). Wilks is one tough cookie, however. First, Savage sets him on fire.

Then, he those loyal to him get deadly ice blocks dropped on them in the ensuing pursuit. 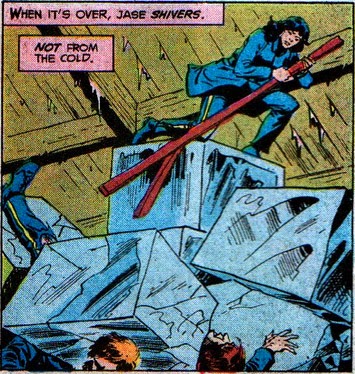 And finally, he has to take some pretty drastic and violent measures. 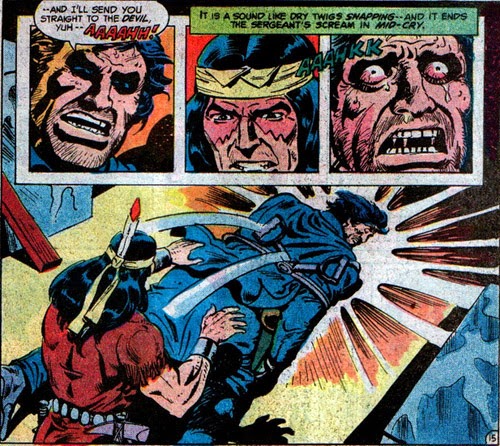 I don't even know what happened there, but it seemed BRUTAL. One last scare (another rapey soldier gets what's coming to him) and Savage and Jase go their separate ways. He heads west, to the plains he calls home, and that's the end of his monthly journey. We would find out later that he became Opal's sheriff.

Who else? Volume 21 of Who's Who awaits and it is CHOCK FULL of obscure characters. How about we start with a villain?
Comics Who's This?

Anonymous said…
The Superfriends' "Apache Chief" looks way too similar to Scalphunter for it to be mere coincidence, as I see it.
July 15, 2014 at 8:15 AM

Siskoid said…
Probably a coincidence, seeing as Apache Chief premiered on television on September 17, 1977, and Scalphunter's first issue is the March/April 1977 issue of Weird Western, which would have been out that summer.

There are only so many Native looks either creative team might have drawn upon, though it's possible someone saw what someone else was working on. (Apache Chief belongs to Hannah-Barbara but is also credited to Jerry Robinson, Bill Finger and Bob Kane, if that helps you follow the clues to some answer.)
July 15, 2014 at 8:29 AM

Bryan Ekers said…
I have these issues, #69 and #70, around here somewhere and at the time I first read them, I don't think I understood how Wilks died either. I gather we're to assume Scalphunter squeezed those ice tongs so hard that Wilks' ribs snapped, but that looks physically unlikely if not flat-out impossible.

And I wondered why, if Jase cut her hair to enlist, why she didn't KEEP cutting her hair by visiting the camp barber every month or so.
July 15, 2014 at 6:43 PM

Siskoid said…
I guess he bear-hugged him out with ice clamps. That's at least more credible than Jase not putting a bowie knife to her own locks from time to time.

Roger Nowhere said…
PErhaps Jase lack of head-dressing showed an unconscious desire of leaving the Army and not being like the other cruel soldiers?

I hope Siskoid gives us some spotlight on sheriff Brian Savage. His times in Starman were a high point of that excellent series!

Martin Gray said…
Jase is ace, she could have had her own strip, Womanman. Or perhaps the Unknown Soldieress.