Who's the Silver Ghost? 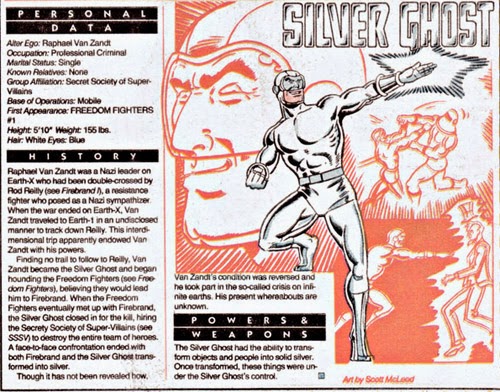 The facts: Though the Silver Ghost is a Golden Age heroes enemy, he's (sadly) not a Golden Age villain. He first appeared in Freedom Fighters #1 (1976) and would become a recurring thorn in the Earth-X heroes over the course of the short-lived series. He would also score a few appearances in Secret Society of Super-Villains, and a cameo in the "villains cover" issue of Crisis on Infinite Earths (#9 to be exact).
How you could have heard of him: In the post-Crisis DCU, the Silver Ghost only rated a few panels. He appears as a member of the Joker's superhuman army in The Joker's Last Laugh #4 (2001), and as an informant for Black Lightning in 2006's Justice League of America #12.
Example story: Freedom Fighters #1-2 (1976) by Gerry Conway, Martin Pasko, Ric Estrada, Mike Royer, Pablo Marcos and Tex Blaisdell 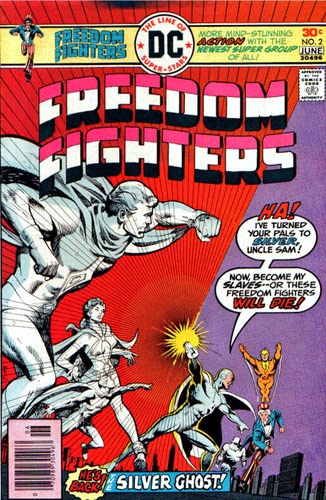 Let me catch you up first: After the Quality heroes showed in a JLA/JSA crossover as the Freedom Fighters, they finally beat the Nazis on their world and found themselves with nothing to do. So they made the journey across the dimensions to Earth-1 and set up shop in New York, with the D.A. even sponsoring their castle-like HQ. Their first case would prove as difficult as it was badly executed. Within minutes of showing up on Earth-1, they respond to an attack on a power station by the Silver Ghost, his boyfriend King Samson (a super-strong guy in a hard hat) and some green-clad henchmen. 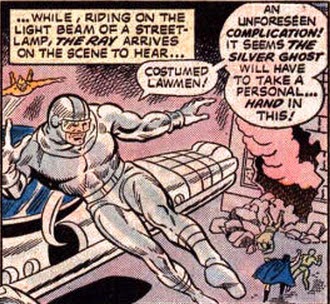 A superhuman battle ensues during which Phantom Lady discovers she gained Phantom Girl's powers during the trip for some reason, and that saves her from Silver Ghost's silvering touch. A henchman gets it by accident: 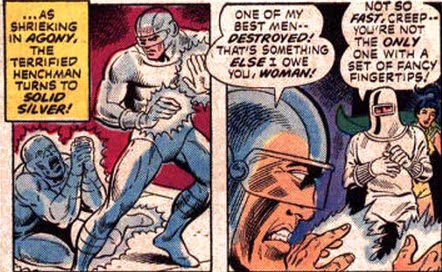 One of his best men DESTROYED!!! So this is lethal and irreversible, looks like. The fighting continues, but ends when Silver Ghost and King Samson escape. Back at Van Zandt's mansion, the henchmen get a reaming for their incompetence, not that they had any chance against, say, a guy with the combined strength of everyone in the U.S.A. or, you know, that one guy with the explosive touch. The Silver Ghost's ultimate goal: reclaiming Manhattan, which once "belonged" to his family back in the New Amsterdam days (why they changed it, I can't say, people just liked it better that way). While the Freedom Fighters are acclimating, the Ghost and his pals stage another attack, this one on a Bell Telephone switching station: 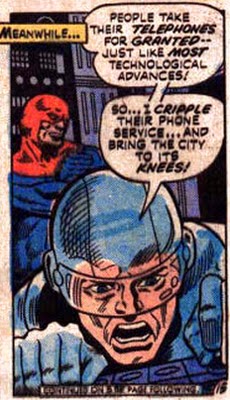 This guy was ahead of his time. Phantom Lady, Black Condor and Doll Man are nearest to the action and respond, but get silvered up for trying to save the day without the three teammates who are actually a threat. Oops! 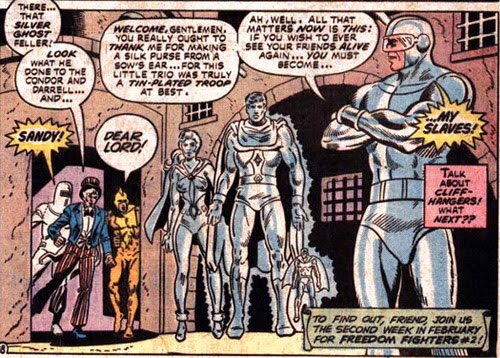 And now Uncle Sam, Human Bomb and the Ray are forced to do Silver Ghost's bidding to ensure he'll turn their friends back into flesh and blood some day. So... they are NOT destroyed? If you were paying attention, this turn of events should hold no sway over the remaining Fighters. Incoherent? This is also the book that changes art teams between the first and second issues, which CHANGES THE LOOK OF THE VILLAINS ENTIRELY. King Samson now looks like an ancient barbarian and the Silver Ghost now sports a cape, but has lost his shorts and visor! 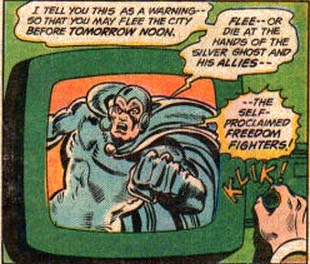 Regardless, he's using the FF to commit acts of terrorism, hoping to force the city into evacuation. But he goes too far when he tries to put nerve gas in the water supply. This shows Uncle Sam will indeed give in to terrorist demands, but only up to a point. Blowing up a subway train with people inside's fine, but this, this is too much. All parties fight, and silvered friends be damned. It all comes to a crashing halt for the Silver Ghost when, trying to touch the super-fast Ray, he puts his hand into the water reservoir and... short-circuits!

The Human Bomb discovers the Silver Ghost's powers were all technological, and reverse-engineers the "electro-magnetic gimmick" so he can cure his friends. Yay! Now to deal with the police for their part in this terrorism thing. As for the Ghost, he looks pretty dead, but he'll be back again and again, I suppose fulfilling the promise of his name. Missed opportunity: Teaming him up with Goldface.

Who else? Ok, so Silver Ghost wasn't a Quality character, but our next find will definitely have been spawned at another company.
Comics Who's This?

Unknown said…
You'd think he'd have been trotted out for the Freedom Fighters series of a few years ago
July 30, 2014 at 3:44 PM

Siskoid said…
I think P&G have always been more interested in reworking the Golden Age Quality versions than the 70s series concepts.
July 30, 2014 at 3:45 PM