Who's Son of Vulcan? 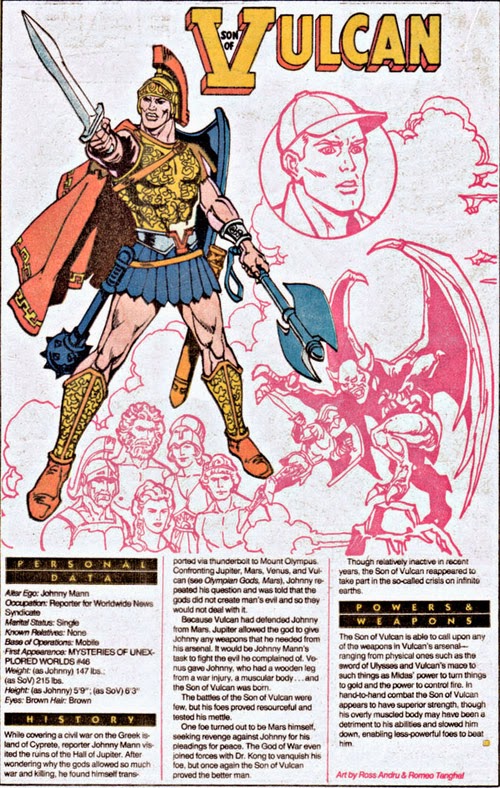 The facts: Created over at Charlton Comics by Pat Masulli and Bill Fraccio, and starting in Mysteries of Unexplored Worlds # 46 (1965), Son of Vulcan may have predated all but Captain Atom in Charlton's stable of action heroes, but he never made it past issue #50 (1966), the last two issues making his title an eponymous one. Joe Gill wrote most of this Thor rip-off's stories, though that last one was by an young up-and-comer called Roy Thomas! Speaking of up-and-comers, a young fan named Dave Cockrum had just given SoV the new costume he sported as of #49. Son of Vulcan was bought by DC along with the other Charlton heroes, but only ever appeared in DC Challenge (#9, written by Roy Thomas), and Crisis on Infinite Earths (naturally) before he showed up in Who's Who.
How you could have heard of him: He played a bigger part in the best-forgotten War of the Gods mini-series, but it didn't lead to bigger and better things (despite him getting an entry in the 90s loose leaf Who's Who) because he was killed in the last issue. Readers are more likely to remember him as a denizen of Limbo in Grant Morrison's Animal Man. The 2007 Son of Vulcan mini-series is about a different guy entirely, Miguel Devante, who went on to join some iteration of the Teen Titans. And because that franchise is a meat grinder, that version was last seen in a coma.
Example story: Son of Vulcan #49 (1965) by Joe Gill, Bill Fraccio and Tony Tallarico 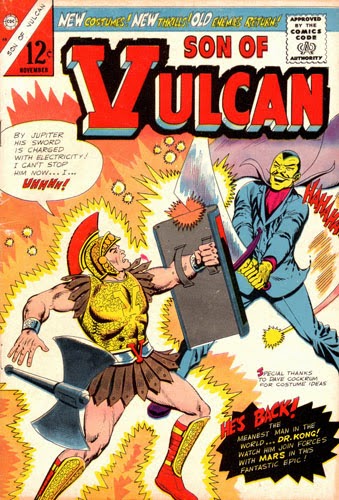 Before we get into "The Diamond Dancers", I want to say a couple words about artist Bill Fraccio. I found it rather sad that Wikipedia included this evaluation from historian Jim Amash (Alter Ego #58): "He was never a fan favorite, but his work sure ended up in a lot of comic book collections. He knew he was not a great artist... He did the best he could for the money he was paid, in the time he had to get that work done. That's all the companies ever asked of him, and he wasn't the type to rock any boats." Sad that he had such a low opinion of his work, because I quite like what he's done here. What he lacks in finesse - and I admit the heaviness of the line competes with some crappy Mexican comics I own; he's kind of a poor man's Bob Oksner - he more than makes up for in dynamism. Hopefully, the panels I'll choose to show will showcase his extreme angles and powerful action. Unfortunately, tastes in the 60s ran more to the slick side of things; it was a time when people preferred Murphy Anderson's Hawkman to Joe Kubert's. Go figure.

Our chosen story features return engagements by Son of Vulcan's two archenemies - Dr. Kong, a Fu Manchu type dubbed "the meanest man alive", and Mars, the jealous God of War exiled on Earth by an angry Jupiter. Dr. Kong is planning to steal 2 billion dollars' worth of diamonds from a diamond exchange (eat your heart out, Dr. Evil), and has booked the Chinese theater across the street as a cover for his operation. Following his instincts, journalist Johnny Mann, meant to cover the diamonds' security, takes in a show and decides to head backstage. 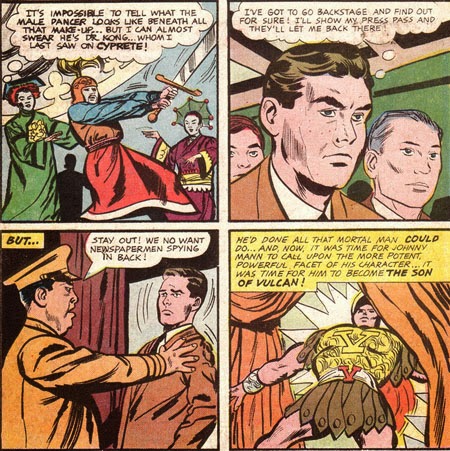 Two days earlier, Mars, left in the Arctic, is fighting sharks, digging for treasure and building up a new human identity, god-style. 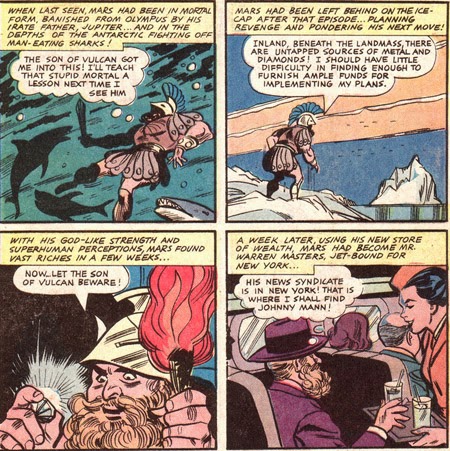 By now, you'll have noticed the slightly Grecian font used in the dialog. I like that. Mars saw Johnny's byline in the paper and arrives to the theater just in time to join the story. But will his revenge be taken away from him by Kong and his giant electric sword? 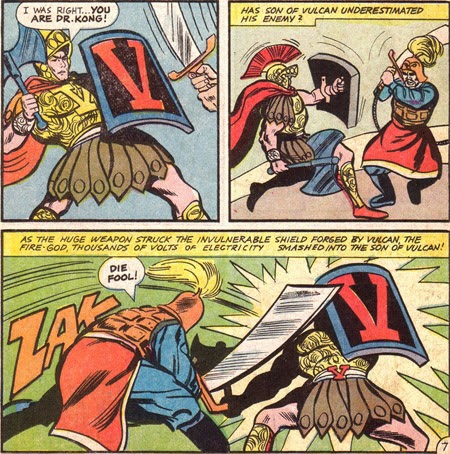 Zap! Though Kong would finish the Son of Vulcan right then and there, the arrogant "Mr. Masters" declares himself Kong's new partner (a show of power makes Kong accept the deal), and warns that SoV is immortal. He can't simply be killed. Instead, they drop our hero in a skyscraper's foundations! 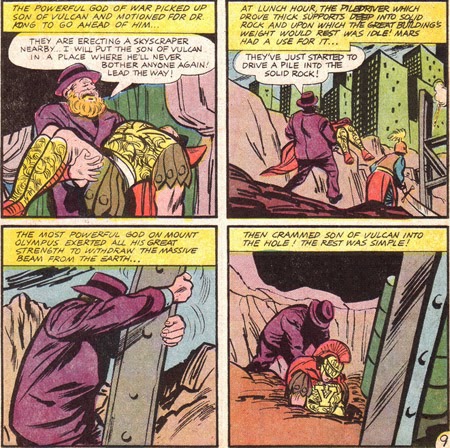 There to live, trapped, for all eternity! END PART 1!!!

Free to plan their heist without fear of demi-divine intervention, they don't expect actually divine intervention. SoV prays to his adopted father, and though Vulcan has been ordered by Jupiter not to give his "son" any more assistance, the King of the Gods surely won't notice one tiny ignition of a vein of coal.

The Gods are very much a presence in this book, not as invisible forces the hero calls upon (à la Marvel Family), but in cutaways where we might appreciate the politics (after a fashion) and their reactions to Earthly events. So Jupiter is pissed, but mostly at Mars. God of War or not, using a bazooka to blow a hole in the diamond exchange's vault isn't very godly. 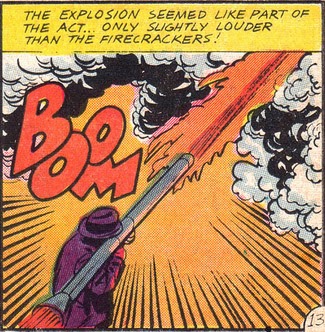 Meanwhile, SoV has reverted to his mortal form and returned to the theater where Dr. Kong is covering the explosive heist with the firecracker portion of his show. Son of Vulcan defeats Kong this time, shattering his sword, and races across the way to the vault where a gasmasked Mars blinds him with tear gas and seals him in. 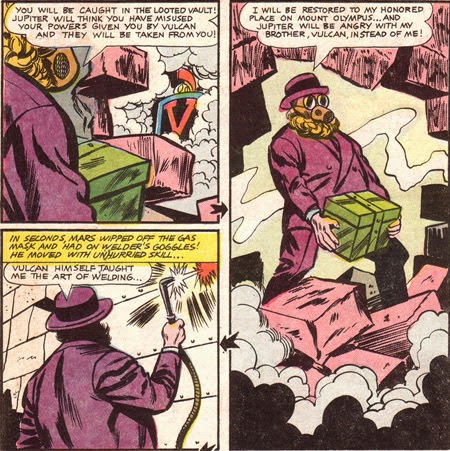 Would you believe Mars is not only an expert welder, but a skilled bricklayer as well? He is. There's no reason for the narrator to lie to me, and the art corroborates the story. Mars/Masters managed to steal 20 million $ in diamonds, but he has no intention of letting King keep his share. And vice-versa: Mars ends up strapped to an ornate chair while the bad guy escapes to his ship, docked nearby. Son of Vulcan, about to be found by the police in the vault needs a means of escape as well. This is provided by Vulcan, who has to borrow a power from one King Midas of Olympus Commons: 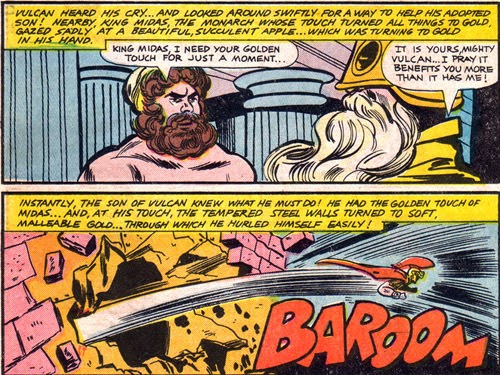 That's one way to do it. Good thing the gods work quickly. Getting the info from Mars, but not releasing him, SoV flies to Kong's freighter where he's told the villain took his mini-sub out of there. No problem. 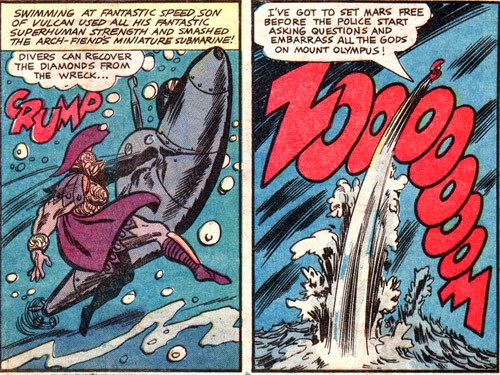 Son of Vulcan will sink and drown his enemies AND be back in time to take care of Olympus' P.R. problems. Unfortunately, Mars is long gone by the time he gets back to the Chinese theater. And we didn't exactly see Dr. Kong's body either (guess who's back by issue 50?).

It's kind of too bad Son of Vulcan didn't have the kind of impact other Charlton heroes did. As a cross between Captain Marvel and Wonder Woman, with the Olympian Gods a nifty supporting cast, it could have been something. After Crisis, Wonder Woman's own re-connection with these myths made the point moot, I suppose.

Who else? Issues XXI and XXII are so full of Space and Star heroes, it would be a shame not to do at least one.
Comics Silver Age Who's This?

American Hawkman said…
If I'm not the Son of Vulcan' s biggest fan, I've got to be close. He's got worlds of potential. I LIKED War of the Gods latinization of the name... Halciber Filius just sounds cooler. You can't really discuss the character without hitting the elephant in the room, though... fun as he is, he basically is Marvel' s Thor. If I were in charge at DC, I'd keep his stories in their original era, and make him an elder statesman hero myself... perhaps the powerhouse of the White Magician' s Echoes of Justice?
August 12, 2014 at 9:05 PM

Siskoid said…
You do sound like the biggest, but I'd be happy to stand at your side.

My modern take would probably have looked like the current Wonder Woman series.
August 12, 2014 at 9:34 PM

American Hawkman said…
War of the Gods getting him into a relationship with Ares' daughter Harmonia was a nice touch too. Admittedly, one straight out of Dr. Strange with Clea, but still...

Also loved the fact that Johnny Mann clearly had some psychic powers on his own.
August 13, 2014 at 7:39 PM

Russell Burbage said…
Picked up the recent (?) mini because it was by a local Ohio guy, can't remember if it was the writer or the artist. Fun story, though.
August 14, 2014 at 7:45 AM

Siskoid said…
Was it? Never read it.

American Hawkman said…
I bought it hoping so, but not so much. That said, it was a pretty good mini in its own right, tying into both the Martian Manhunter mythos and the Secret Society of Super-Villains series of the 70s. Devante and his predecessor would have made fine Sons of Vulcan for a different Earth in the Multiverse, though...
August 14, 2014 at 5:20 PM

Erich said…
One thing I loved about the original Who's Who series was the vast number of artists they got to contribute, including getting a number of artists who were no longer active in mainstream comics to return to their original creations. That said, I think it was an unfortunate missed opportunity that they didn't get Bill Fraccio out of comics retirement to draw the Son of Vulcan entry. (I was also disappointed that Pat Boyette didn't draw the P.eacemaker entry.)
August 16, 2014 at 12:07 PM

Siskoid said…
Wiki wouldn't tell me what happened to Faccio after he retired. Many older artists might have had arthritis or vision problems preventing them from doing the work. Or maybe his cred really was that low.
August 16, 2014 at 3:36 PM

Doc Savage said…
Except Thor was pretentious and dull whereas Son of Vulcan is thoroughly enjoyable.
May 9, 2016 at 12:15 AM

Doc Savage said…
And that would be a shame since WW has suffered from shitty writing for over 30 years now, bar a couple of issues in the Perez era.
May 9, 2016 at 12:16 AM