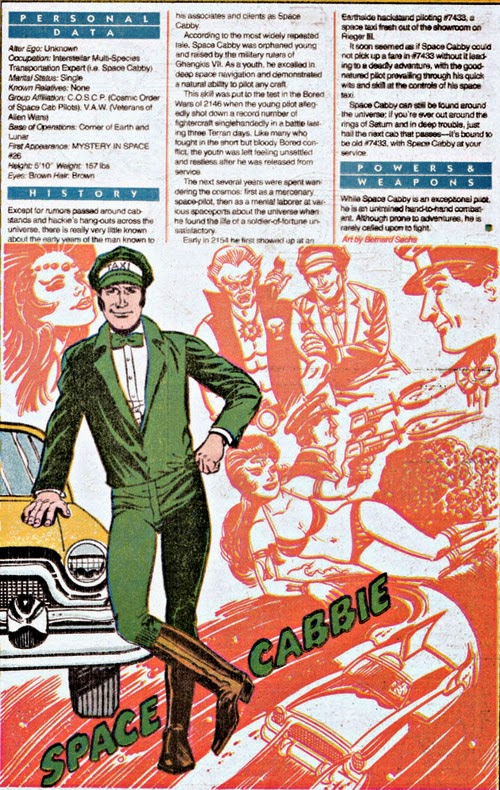 The facts: Created by Otto Binder and Howard Sherman, Space Cabbie first appeared in Mystery in Space #21 (1954), returned in 24, and became a recurring strip between issues 26 and 47 (1958), making it HIS book. Besides Binder and Sherman, Gardner Fox, Gil Kane and Bernard Sachs would all work on it. A couple of stories were reprinted in the 70s, and he got a small role in DC Comics Presents #78 in 1985, the Forgotten Villains team-up. Like a lot of Limbo-ed characters, he was featured in DC Challenge (#7-8 to be exact).
How you could have heard of him: The stuff of cheeky cameos ever since, Space Cabbie has been in everything from the Justice League Unlimited tie-in book to Lobo (his biggest role in modern comics, chasing down space bikers with the Main Man), from Starman to Books of Magic, from JLA: The Nail to Ambush Bug: Year None. Keith Giffen apparently intended to introduce Space Cabbie (or Cabby) in the New52's Threshold, but I don't think he got to it before the book was cancelled.
Example story: "The Luxury Limousine of Space" in Mystery in Space #45 (1958) by Otto Binder and Bernard Sachs, reprinted in DC Super-Stars #6 (1976) 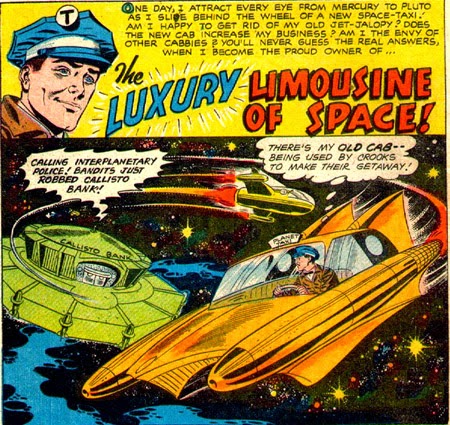 I've got to say, while the premise seems ridiculous (or, as it was created by Otto Binder, the father of the Marvel Family, shall we say whimsical?), I found this Space Cabbie adventure quite fun. I could see him headline a cartoon show, for example. One thing though: Don't expect scientific accuracy. In fact, expect scientific INaccuracy. You'll have a more positive experience. So how does a space Cabbie adventure start? With someone hailing a space cab, of course!

Don't you just hate it when your space limo breaks down? How's this jewel tycoon going to get to Mars in time for his appointment? Why, Space Cabbie has a turbo-charged atomic motor and is the best pilot in the Solar System, that's how! But he will have to take some dangerous shortcuts: 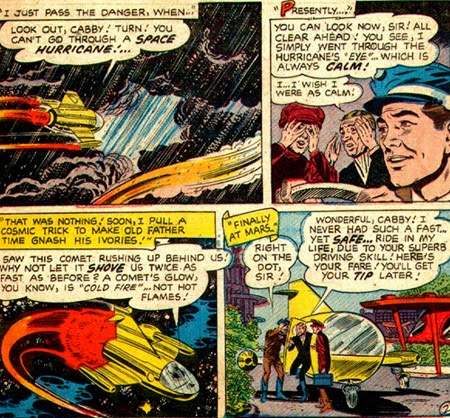 Right! Space hurricanes with vertically-falling rain. WHY NOT?! Getting pushed by tiny comet? I BUY IT! A cab driver okay with "You'll get your tip later"? It can't all be credible, I guess. But he really does get a tip later, new luxury space cab! This thing has pure gold trimmings and all the options - perfumed air conditioning, hi-fi space radio, and even cosmetics dispensers for the ladies, and free cigars for the gents! 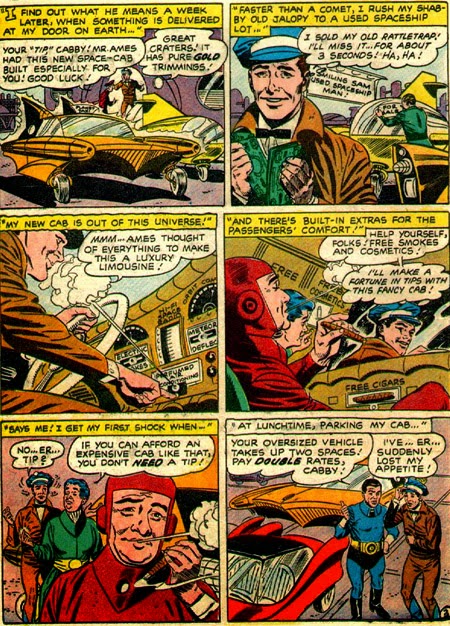 But wait! Now, nobody wants to give him a tip because he obviously doesn't need the gratuity. And the damn thing is so wide, all the parking spaces cost double. Never mind the gas prices! Or the fact it can't squeeze into the usual space turnpikes like the famous Asteroid Tunnel (clearance 12 feet). Sadly for Space Cabbie, he can't exactly trade it in, because someone already bought his old car. Sadness, until he sees car fleeing a bank robbery and tanks off after the crooks. Not easy, because his new heap isn't nearly as fast or maneuverable as the old one. So he hatches a plan. He takes the taxi sign off the top and lures the criminals into jacking his ride. When they approach, he'll call IPPY (what they call the Interplanetary Police in this future, and the reason THEY don't have their own strip) so they can make an arrest. Except the baddies jam his radio! Well, maybe he can put his fancy meteor deflector to good use.

Unfortunately, using like a tractor beam like that means the car becomes vulnerable to deadly meteor showers in the area.

That's some really bad weather, but thankfully, he's clear of it and riding his makeshift space magnet. The crooks are about to shake him loose when those IPPY IPPY shakers show up out of the blue (the black?) and force them to surrender. So how did Space Cabbie get them there without the benefit of space radio? Would you believe his space limo's stash of distributable lipsticks? 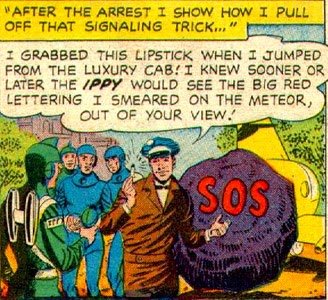 That's right, a single lipstick was used to write that big S.O.S. (ladies and rock stars? yay or nay?) and the cops somehow saw it from afar. With their space goggles or something. Can anyone say "Silver Age"? I knew you could.

Despite the silliness, I quite liked this unassuming little story, and I'd love to see some crazy Space Cabbie adventures at some point in the future (hopefully not concurrently with the year his stories take place). I wasn't kidding when I said I thought it would make a fun cartoon. Every week, a new fare brings a world of trouble on S.C. Shenanigans ensue. What do you think?

Who else? Thought about the Space Museum, but that's a "What" and might be a little similar to this entry. Instead I'm moving on to a horror character I know nothing about.
Comics Silver Age Who's This?

Anonymous said…
He had a great appearance in James Robinson's Starman in the 90s- that was my first encounter with the cabbie.
August 14, 2014 at 9:47 AM

Garnet said…
Of course he did briefly appear in an Ambush Bug comic, accompanied by the memorable joke "He'll take you anywhere in the universe you want to go, except Harlem."
August 17, 2014 at 9:40 PM