Who's the Spawn of Frankenstein? 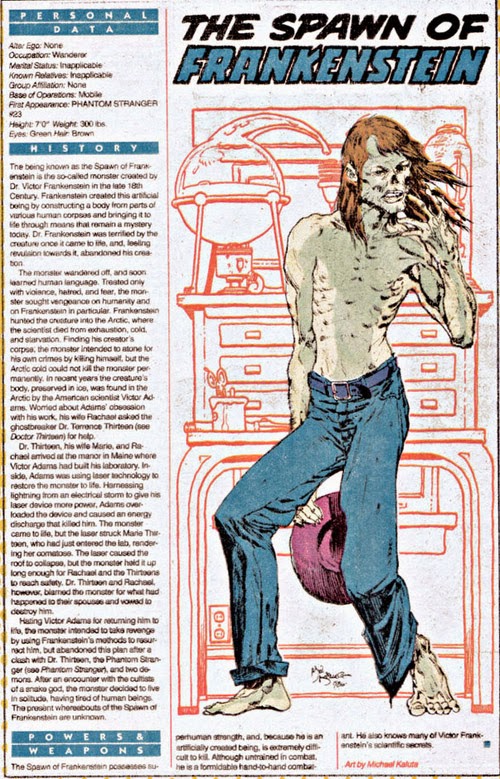 The facts: The Spawn of Frankenstein was introduced in Phantom Stranger #23 (1973) as a back-up by Marv Wolfman and Mike Kaluta, which was featured all the way to #30, though only the first three issues are by that creative team. Issue 26 has the Spawn share the cover and the entire issue with the lead, returning to the back-up now written by Steve Skeates with art by Bernard Bailey. Then, nothing until the Who's Who entry. Since he is essentially DC's version of Frankenstein's MONSTER, Action Comics #531 (1982) may also count as an appearance.
How you could have heard of him: Young All-Stars #18-19 (1988) did feature a Frankenstein's Monster who called himself Victor Frankenstein II who was at least inspired by the Spawn, but these days, the creature simply known as Frankenstein (from Grant Morrison's 7 Soldiers, and from the first wave of New52 books) is how we remember Vic I's creation.
Example story: Phantom Stranger #23-25 (1973) by Marv Wolfman and Mike Kaluta 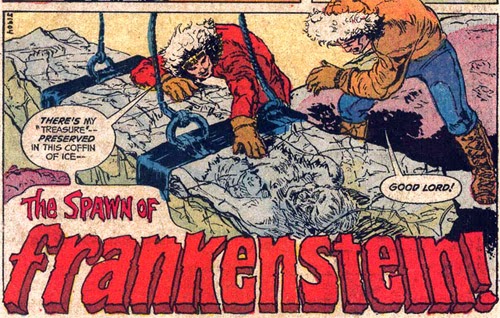 Mary Shelley's Frankenstein is a book that almost demands a sequel because it ends with the Monster drifting off on an ice raft at the North Pole. So having him found in the ice, Captain America-like, is a perfectly legitimate place to pick his story up again. He's been found by Victor Adams, 1970s descendent of Victor Frankenstein, who is obsessed with the creature and tries to make it rise from the dead with a life-giving LASER! 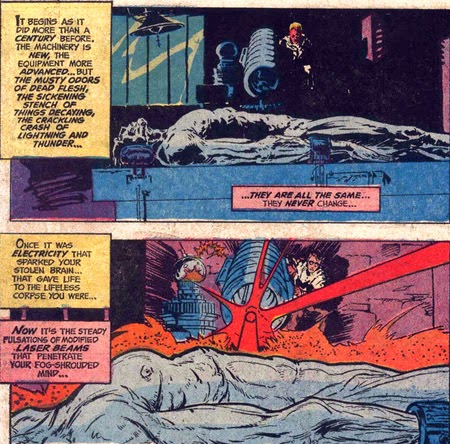 Well, obviously. We're not in the Victorian era anymore! It still needs a big electrical storm to work, and wouldn't you know it, Victor gets electrocuted, and he shoves the laser in the wrong direction as a result.

Right into Dr. Thirteen's wife, Maria! The couple was called in by Victor's OWN wife, who was really worried that this was usually THEIR back-up--I mean, that her husband would do something stupid. Old family friends who can't pass up a supernatural mystery adventure, they came running... right into a laser beam. And Maria falls into a coma, as you might if you were hit by a giant laser (I expect you not to question it, just as I've decided not to question why Marv Wolfman keeps narrating horror features in the 2nd person singular--WHY MARV, WHY?!?!! IT'S SO CLUNKY!!!--ok, you may now question the science, but only a little bit; please use all caps). The Spawn awakens to Maria's screams, bashes the laser away and kills Victor. And still, Thirteen vows to destroy the creature, as does Victor's wife. The monster spends a few pages running around buck naked, spying on people (where's the neighborhood watch when you need it?), until he robs an army surplus store for a pair of pants. Sadly, a couple cops surprise him: 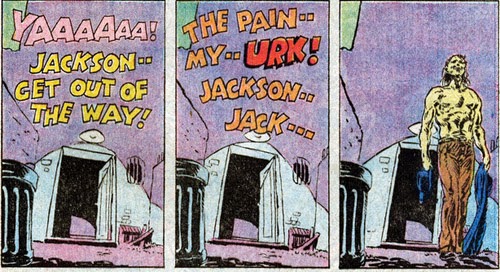 Well, I don't know WHO to care about anymore. The Spawn follows up by killing the two gravediggers looting his creator's corpse and then vowing to get revenge on Victor by... raising him from the dead too?

That'll teach him! And may I just say that I didn't know you could get army surplus capes. Why am I not shopping there more often? Spawn (can we call him Frank? I feel like we should call him Frank) brings Victor's body back to the house where, completely by coincidence, Vic's wife has been captured by Satanists who mean to sacrifice her to open the Gates of Hell(TM). 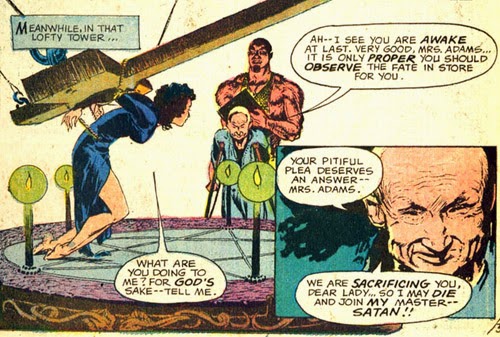 Frank interrupts the ritual because while the Lady Adams wants him dead, he feels very protective of her. A big Satanic bruiser knocks him out and they decide he'd make a better sacrifice to the Beast. Except Frank is really strong. 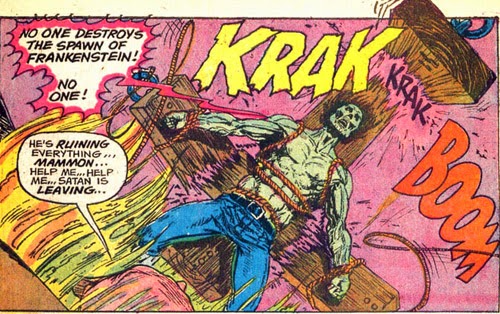 He breaks the upside-down cross and Hell closes up. But not before a burning patch of it violently consumes the Satanists. When Mrs. Adams wakes up, they're gone aside from the smell of bacon, and there's the dead body of her husband in the room with her. 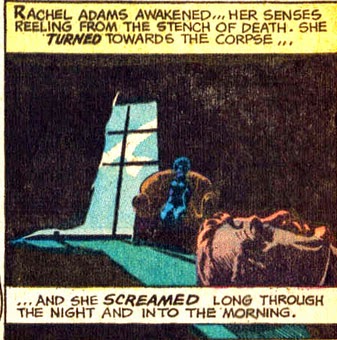 Cue scream. That's where the character's creators (or adapters) leave off, and the strip merges with the Phantom Stranger main story. In any case, he never does revive Victor.

So did any of this happen in Frankenstein's current continuity? I guess it did. Only the Flashpoint version was awakened during WWII, so the 7 Soldiers and New52 Franks could have been unfrozen from the 70s on.

Who else? I'm ready to move on to the next issue of Who's Who, but may one day return to such characters as Spellbinder, Spanner (and his Galaxy) and even Stalker, which I've left alone for now. Place your bets for who I'm going to cover in volume 22: Starfire I to Syonide.
Comics Who's This?

American Hawkman said…
Near as I can tell, Spawn of Frankenstein, the truly villainous Frankenstein of Young All-Stars, and SHADE' s Frankenstein are all mutually exclusive due to varying events in their timelines. Roy has mentioned he intended for All-Star's Frankenstein to emerge from seclusion and become a mob boss, which would have been fun. At any rate, the whole lot really needs to meet up some time.
August 25, 2014 at 7:45 AM

Jeff R. said…
You have a lot of choices in the next issue, don't you? In fact, by my count half of the entries would work. I'll put my bets on two guys/groups with "Star" in their name and two with names that could easily be mistaken for 80's metal bands.
August 25, 2014 at 6:45 PM