September 06, 2014
"Ready?" "Why do your people always ask if someone is ready right before you're going to do something massively unwise?" "Tradition." 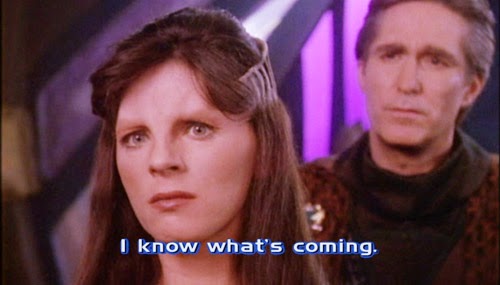 IN THIS ONE... Sinclair's back for a mission to bring Babylon 4 to the past so it can win the previous Shadow War. Sheridan is accidentally shunted to the future instead.

REVIEW: This is all gets rather Moffat-era Doctor Who, which is its own kind of exciting. It's all circular, with the characters acting on information they're potentially getting from future versions of themselves speaking to them from the past. Marcus' Merlin theory aside, this is like the source of Kosh's prophetic knowledge, although he did seem attuned to possible changes in established "history". The power of prophecy does exist in the B5 universe, but since temporal anomalies do too, and transmissions can be broadcast through them (like B5's distress signal 8 days hence), seers might be getting telepathic visions from those holes in space-time. But I digress because time travel is a hobby of mine. The point is, this two-parter will finally(?) show us the events of Babylon Squared from the other side, while also explaining how Babylon 4 was instrumental in saving the universe from the Shadows 1000 years ago, AND spinning Sheridan off into a dark alternate future that presents the stakes (why they must save the cheerleader) and gives us interesting variants of tried and true characters.

Of course, the big thing here is the return of Jeffrey Sinclair. He's required to bring Babylon Squared full circle, but because the actor has been out of commission, the production needs to cheat B-Squared's projections. Sinclair has an unexplained scar to match his appearance in that episode, for example. One imagines it would have been an onscreen event if O'Hare had stayed on, and been a revelatory moment inching us closer to the closed loop (and would that loop have closed later?). But then, the "memory" of him and Garibaldi in a hellish firefight also seems suspect unless they can get Sinclair to B5+8d, so yes, fine, the timeline is in flux. Babylon Squared might have made certain events more likely, but paradoxes be damned, they're not set in stone. That firefight won't happen if the heroes win, and neither will that destruction of the station. We can already see time-tweaks, like different hair and clothes from those showcased in B-Squared (nitpicks easily explained away). And if even previously experienced future moments aren't sacred, it means the Shadows CAN succeed in their plan to change history. They would avoid the paradox by going into dormancy anyway, but having lost fewer ships, they would be stronger in the present. Works for me!

That possible future with stronger Shadows will have the station destroyed within 8 days, but if the farther future Sheridan visits is part of the same timeline, he'll have escaped that destruction and won the war against the Shadows eventually. Or so Emperor Londo tells us. He now wants revenge because though an Earth-Minbari (and whoever else) alliance won the day, Shadowy remnants still remained and laid waste to Centauri Prime. Since this would have been a case of "you reap what you sow", it could also be the Republic's fate in the true timeline. The Centauri certainly deserve it. Shunting Sheridan out of time is actually a good way to keep him in the hero's role while also giving Sinclair his due. The latter's character has obviously changed, or else you couldn't buy into Marcus' contention that "Ranger One" is super-cryptic (the Sinclair we knew was as much a victim as Sheridan is of being surrounded by cryptic wise men and women), but the old spark is still there. I hope O'Hare is having fun for real, because it looks like Sinclair is, playing action hero after years of contemplative ambassadorship and training others to be action heroes. Poor Garibaldi is missing all of it, his best friend at least leaving him voicemail. It all has the makings of a PROPER send-off for Sinclair, both epic and personal. Part 2, here we come.

ON THE OTHER SIDE OF THE WORMHOLE: Trek became notorious for time travel shenanigans like this, the past and future collision most reminiscent, at that point, of TNG's finale, All Good Things...

REWATCHABILITY: Medium-High - At times, you can see the seams as the Sinclair situation is rewritten to adapt to real-life events, but it's all coming together rather nicely nonetheless.
Babylon 5

LiamKav said…
Garibaldi's hair, yes, but I don't think the clothes are a nitpick. During the B-Squared flashforwards, everyone is in flak jackets and armor. We don't see a single Earth Force uniform. If Sinclair had returned to make a final stand (or had never left) then it would make sense for him and Garibaldi to suit up for their final stand.

(Although, speaking of hair, Sheridan's mighty mullet is beginning to show. It's a nice touch that he's responded to breaking away by changing his hair. It will have reached epic lengths by the season finale.)

This episode does one thing that I always felt was a real Babylon 5 strong point. We've had the mystery of Babylon 4 since season 1, and now we're going to answer it. We're bringing back Sinclair! We're revealing who stole the station, and more about the last Shadow War! But at the same time, we're setting up new mysteries via Sheridan's flashforward. We're answering one question while setting up another.

I'll save some more stuff until tomorrow, but there's a fascinating discussion concerning the various "conclusions" of the show at different stages of development, including WWE, SiL and Babylon Prime.
September 6, 2014 at 10:49 AM

LiamKav said…
Ah yeah. That's a mistake. There's a point next season where they go out of there way to avoid something similar.
September 6, 2014 at 11:46 AM

Ryan Lohner said…
JMS declined to reveal the circumstances behind the filming of this two-parter after revealing Michael O'Hare's illness, but I do have my own theory: after a year and a half of treatment he was much more lucid, but there was also the threat that he could slip back at any time (as indeed he did later on). So JMS decided he had to do this story, the only one that absolutely required Sinclair's presence, right now, or it might never be possible.

Another thing I've had to develop my own theory for: Sinclair's flash to Garibaldi's sacrifice which is here relegated to a dark future that the heroes will fully prevent. My idea: it was going to be during Severed Dreams, with our not seeing who they were fighting being not to hide some new alien threat like it seemed, but that they were fighting other humans. And Sinclair would then use this warning to be able to get Garibaldi out of there.

The original script has the group going to the Great Machine for the briefing, with Draal and Delenn taking turns explaining the situation and also introducing Zathras. But John Schuck had been offered a plum role in a tour of Hello Dolly, and JMS was never one to keep his actors from these things. And since Draal had already changed once, he decided it would be too weird to give us a third actor, so the whole subplot ended up dropped. This does make it really weird later how they never get around to using their "ace in the hole" as Sheridan promised earlier, but that's reality for you. For now, the big victim was Mira Furlan, who found herself saddled with a lengthy bout of exposition that was designed to be shared between two people. But she's so good at what she does that you never do feel that length.

The novel To Dream in the City of Sorrows covers Sinclair's time on Minbar, and reveals how he got the scar: he and Catherine were investigating a Shadow operation when she was caught in a time flux they opened and lost somewhere in time, while a tiny piece of her ship was left behind and flew into Sinclair's cockpit, slicing up his face. Another interesting thing revealed in that book: when Sinclair told Garibaldi "Stay close to the Vorlon," he meant it in the "keep your enemies closer" sense, trusting that Garibaldi would pick up on the only way he could put the warning with the Minbari watching.

Jerry Doyle developed a great animosity for O'Hare during their year together, so that he refused to share any scenes with him here. I'll give him the benefit of the doubt that he didn't know about O'Hare's condition (including an interview someone quoted earlier where Doyle called him "completely nuts"), but I do really wonder how he took the news.
September 6, 2014 at 11:59 AM

LiamKav said…
There's a bit from JMS on the Lurker's Guide for this episode that really annoys me. He's asked about Ivanova is acting while the station is being destroyed:

"I felt a bit of an outburst, a final letting go of the emotions, was not inappropriate for her. (Although I do think Claudia may have played it a bit too hysterical at times; separate the lines from the performance and look at it again.)"

Joe, you are the Executive Producer of the show. You are responsible for it. You never, ever publicly criticise your actors like that. Especially in a "no no no, the LINES that I wrote are okay, it's just the actor saying them that's wrong" manner. It's unprofessional, never mind getting in to the whole bit about her turning you down.
September 6, 2014 at 8:02 PM

This most recent time watching "Severed Dreams", I had a similar thought. The scene where the attacking EarthForce soldiers cut a hole in the wall and burst through made me think "wow, this is just like the Babylon Squared flash-forward". I never considered that it might have actually been meant to be that.
September 6, 2014 at 8:03 PM