September 19, 2014
"When you reduce a family tree to a family bush, you just can't hide as much beneath it." 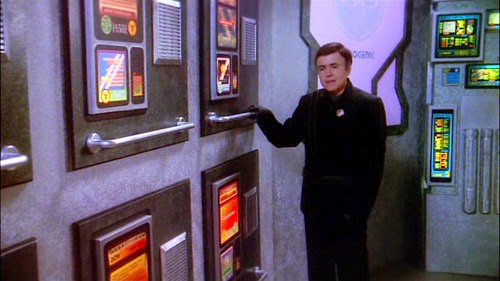 IN THIS ONE... After the Shadow War, people rejoice and return to the station. As Earth starts a smear campaign against Babylon 5, Bester tries one more time to get his beloved free of Shadow influence.

REVIEW: After the big blow-out, everyone deserves a little rest, but not too much. Unfortunately, it appears we also need a truckload of exposition in case Into the Fire picked up lots of new viewers. There's no question an episode is over-written when it ends on a telepath actually TALKING for MINUTES to another telepath who is behind a wall. "I love you and hope we'll be together. Also, let me explain the plot." Other clunky moments include Garibaldi reciting his entire life story to someone who already knows it, Lyta expositing her feelings to Zack like he's a therapist, and Sheridan jumping to exactly the right conclusions about Lyta's role in the destruction of Z'ha'dum based on very little evidence indeed and making a speech about it. Zack has gotten an injection of personality and energy, but I don't like it. Is he training the troops, or doing stand-up? It's a bit over-the-top, and as with a lot of JMS-penned comedy, not particularly funny (cue line of Elvises at customs).

I suppose part of my problem is that smaller roles are being expanded, but the actors in those roles don't appear to be up to it. Lyta becomes a vapid reciter of lines, Zack a blaring class clown, and Damian London an unfunny, caricatured Centauri courtier/toad, sees his role expanded to that of regent and all his edicts have to do with interior decorating. I probably wouldn't mind so much if there wasn't the promise of seeing more of him. At the end of the episode, the dark servant we saw in control of Londo in War Without End attaches itself to the comedy regent, so we know it'll come up again. Compare all this bla bla bla to the brief exchange between Londo and G'Kar, which is to me the most memorable scene in the whole episode. Londo tries to avoid G'Kar, but thinks better of it, and is told he doesn't exist in G'Kar's reality anymore. He was only ever an obstacle or a tool to free Narn. Now that this is done, G'Kar has no use for Londo, and he would do well to remained "unnoticed". There's no real response to that because it's all in the acting. Of course, if we're still on track for War Without End, we know the relationship must grow from here (and G'Kar's eye NOT be repaired?), so this is far from over too.

Despite all the talking, a lot happens too. The even with the greatest impact on the show is Garibaldi's resignation, but as far as "epiphanies" go, it's an artificial one. He's been programmed to leave. Presumably. The scene in his bathroom where he draws a face on the foggy mirror is an eerie reminder of whatever's been implanted in his mind, and he doesn't erase/repress whatever truth is coming through until he gets the subliminal trigger that makes him take his decision. And yet, it could be genuine. What's the point of winning a war if you can't enjoy the spoils, in this case, your freedom? Z'ha'dum's destruction isn't just the tying up of a loose end, but a look to the future. We have dark agents flying off, the same agents referenced in War Without End, and Lyta's powers exposed as a lot more powerful than they used to be. There are promises made in each revelation. The action du jour comes via Bester's tip that President Clark plans to frame Babylon 5 for the destruction of loyal Starfuries, which sends Ivanova into the fray to set things right. Seems Bester sacrificed his own men for a shot at Z'ha'dum's technology (and his lover's cure), so the frame's really on Clark, but then, with the president's propaganda machine saying B5 is a nest of terrorists, he gets what he deserves. If enough of the military joins Sheridan's cause, we might have a full-blown civil war on our hands, and of course, we need something to tide us over for the rest of the season with the Shadows gone. Looks like there's plenty of enemies to around after all.

REWATCHABILITY: Medium - Over-written to an inch of its life, the episode nonetheless features a few good moments and resets the board for the next engagement.
Babylon 5

Ryan Lohner said…
It was around this point that the show's stages were given a safety inspection, and it was discovered that JMS' office just happened to be square in the middle of a ton of electromagnetic energy from various power sources. The inspector who discovered it said you could fry an egg on the desk, and no amount of money would convince him to spend a single day in the room where JMS had now been working for more than three years. Naturally, this was also a significant factor in the toll the job took on his health, and when you consider that this was the guy who wrote every episode but one after the first two seasons...sometimes I kind of do suspect there was a bit of divine intervention in this show not only getting finished, but turning out anywhere near as well as it did.

Like Veroon and Zack, Minister Virini was a one-shot character expanded to an important part of the mytharc purely on the strength of his actor. Damien London's particular brand of flamboyance surprised everyone with what was written as a pretty flat role in the season 2 finale, and that built all the way to what we see here. Unfortunately, this also leads into one more major consequence of War Without End being moved from the end of the show, which for me is the single biggest blow it ever took: starting from Sheridan wondering where the Shadows' allies could be going at the end of this episode, we're now going to spend the rest of the season watching him acting like he's completely forgotten his trip to the future and has no idea what could possibly be happening on Centauri Prime. JMS' excuse is that for all he knew, those events could be the result of something completely different, but it seriously doesn't hold water and I wish he'd just admit he got screwed over on the timing here and had to just plow ahead regardless. Given the circumstances the show was made under, I know I wouldn't blame him.

Garibaldi's talk about a bunch of people warning him not to hire Zack is very much based on how Jeff Conaway joined the show, with several of his former co-workers chiming in that it was a mistake, but it ended up working out very well. And it's also now pretty depressing to watch the bit where Londo tells him he'll have to get in line to die.

Also in that scene: the three Elvii are not something JMS is to blame for, as they're actually three crew members who were giant Elvis fans, all wearing costumes they owned themselves, who begged him to be able to do it. The justification being that after Zack is afraid the next entry through the door will be the Second Coming, you get the Three Kings.
September 19, 2014 at 12:28 PM

LiamKav said…
I've always liked Zack, possibly because his Nightwatch arc was one of my favourite bits of the show - the regular guy not quite understanding the games that those above him are paying. He is often saddled with bad lines, as it Lyta. I prefer Lyta to Talia, both in terms of character and and also becauseI think that Pat Tallman is a better actress than Andrea Thompson (and because scary Lyta can be really scary), but she is frequently given some awful expository dialogue. Plus, she is often treated like shit by the characters. Zack reals off a list of possible reasons why, but he misses an important one... as scary as the PsiCorp is, they do at least enforce rules that make non-telepaths feel comfortable. How would you feel as a soldier hanging around a telepath that has no reason not to scan your every single thought?

Minister Virini actually appeared way back in "The Quality of Mercy", but only for a few minutes, and he was much more "restrained". I think the idea here was for us to go "oh, it's the comedy character la la la oh no he has a keeper!" JMS frequently does the comedy to drama/horror thing, not always successfully.

Finally, I'm not sure why Garibaldi goes to the effort of folding up his Army Of Light uniform just to then crease it all up when he stuffs it in the box. Maybe his programming includes some sort of anti-OCD element.
September 19, 2014 at 3:50 PM

Siskoid said…
Which makes her a little dense in not realizing why people don't warm to her. After all, didn't she live with this stigma all her life?
September 19, 2014 at 4:18 PM

LiamKav said…
"After all, didn't she live with this stigma all her life?"

She was with PsiCorp before. She had to follow the rules. I imagine that lots of people hate PsiCorp while still being grateful that they are around. (A bit like how people might complain about police brutality but still be grateful for a policeman when there's an escaped criminal around.)
September 22, 2014 at 2:32 AM