September 26, 2014
"We fight because it is our nature. It is the calling of our heart. Life and death are simply two possible consequences, both equal, neither valued nor feared above the other. For a warrior death is simply the release from our obligation." 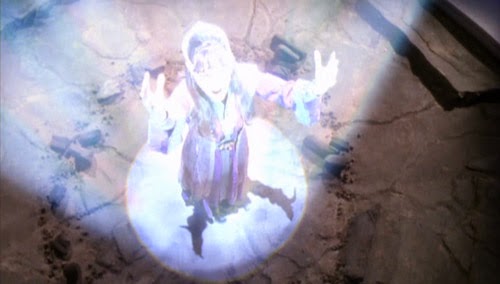 IN THIS ONE... Delenn puts an end to the Minbari civil war. Bester manipulates Lyta and Garibaldi. Sheridan declares war on Earth.

REVIEW: Though the show is coy about Neroon's loyalties, I was right in thinking he was on Delenn's side all along. Not being surprised doesn't hamper my appreciation of the episode however. Delenn's plan is an echo of Sheridan's in the previous episode, using a far-reaching broadcast and not telling her closest aide what's going on, not unlike the human beau. But this being Minbar, she plays on tradition instead of paranoia, and finds the right ancient ritual to expose the Warrior caste leader Shakiri's self-serving ambitions and weakness in front of the whole planet, while also showing her own resolve, wisdom and respect. Like Sheridan, she benefits from the cult of personality, as Neroon sacrifices himself, converting to the Religious caste. It's a good thing he does, because the ritual's rules who have it mean the Warriors should rule the day otherwise (I think), and he evaporates just as I was really getting to like him. I thought for sure this would make him the leader of a new and more balanced Grey Council, but he is instead a martyr who gets an empty spot at the center of the mended Council, at least until the One Who Is to Come takes his rightful place there. So... Sheridan? Delenn herself, like G'Kar, refuses to exalt herself to a higher position.

The stuff on the station is comparatively tedious, but not entirely unpleasant. I guess I'm just a mite tired of Garibaldi getting defensive with Zack (who really doesn't deserve the abuse), and I'm only so-so interested in Lyta's hardships (not the least of which is Zack's gropey advances, not that she seems to mind). The mysteries surrounding these characters need a quicker resolution, basically. I'm nonplussed by the enigmatic Mr. Edgars, and thought Garibaldi would be on Mars by now. I guess Bester is in on Garibaldi's programming, and perhaps used his mind as a dead drop, or perhaps he isn't and has completely different plans for him. I'm fast losing interest in the whole subplot, and am rather impatient for clarifications about whatever factions are at work. All we can say for sure is that Bester manipulated events to force Lyta into his hands, and she rejoins the Corps in exchange for their access to her Vorlon-enhanced body/brain once she's dead. Really crappy how Sheridan isn't taking care of her after all she's done; I'm not even sure I buy it. But it's usually nice to see Bester, especially if he's going to have this much agency, and I empathize with him talking literature with a grunt ("the shallow end of the gene pool" means a lot more coming from him), but geez JMS, he doesn't need to explain his jokes. I dare say the average B5 viewer ISN'T splashing around at that shallow end.

Threatening to evict Lyta isn't Sheridan's only sin; there's a great deal of wrath too. Though we're totally on his side, I'm sure, his fury over Earthforce's murder of 10,000 civilian refugees pushes him towards the megalomania Garibaldi claims in driving the captain these days. At least in performance. But the fury is exciting and the music mounts. We're going to war with Earth, liberating everyone, and the fleet better not get in our way. Oh yeah. Hopefully we don't get a repeat of the Shadow war with episode upon episode of build-up while we wait for ships to arrive. There's rather more urgency this time.

REWATCHABILITY: Medum-High - Some rockin' moments for Delenn and Sheridan, but I still can't get with the Garibaldi program.
Babylon 5

LondonKdS said…
This episode gives a whole new meaning to the Minbari culture's thing about spotlights from above, not to mention Sebastian's interrogation of Delenn in "Comes the Inquisitor".
September 26, 2014 at 8:12 AM

Ryan Lohner said…
This episode is easily where you can most see the seams from JMS having to cram the end of the show into this season. Most noticeable is the out of nowhere final scene where after being absent from the rest of the episode, Sheridan is abruptly given the motivation to actively go to war against Clark. If there was more time available we would have spent a whole episode seeing him pushed to this position, but it does the job well enough.

Also, the Minbari Civil War would have lasted a few more episodes, which I imagine would have involved seeing much more of Shakiri. This would give his defeat more weight instead of his being another one-shot bad guy who's naturally beaten at the end. And probably Neroon's impromptu conversion would have been built up to a little more.

But for all that, the episode still kicks all kinds of ass. Its central theme in both stories is the aloofness of the people who choose to go to war from those actually on the ground fighting it. If the Starfire Wheel was an actual thing, we'd probably have far fewer politicians clamoring about how war was the only choice for their country. And back on the station, Lyta is in the same situation as many returning soldiers. If it's not quite the horrific reception the guys who came back from Vietnam got, it's at least on par with Dana Andrews in The Best Years of Our Lives.

The guy who asks Garibaldi to find his dog and cat is played by Scott Adams, the creator of Dilbert. He named B5 the greatest show ever on television in an interview, and JMS figured he had to return the favor.
September 26, 2014 at 11:23 AM

LiamKav said…
You're absolutely right in how crappily the show/characters treat Lyta. She risked her life to expose Talia. She drops everything at a moments notice to help the command staff whenever they want an errand. And yet she has to move to smaller quarters for monetary reasons, despite Sheridan going absolutely baslistic when the same thing happened to him back in season 2.

If it had been treated as a "returning soldier" thing, it would make sense, or even a "the command staff are prejudiced against telepaths". But that isn't how it comes across. It just seems like they've forgotten about her because they're distracted by the shiny new war in front of them.

Ah, Scott Adams. Never has a creator gone from having my love to having my hate so quickly. Even on his worst days of making Superman walk across America, JMS never annoyed me as much as Scott Adams.
September 29, 2014 at 3:44 PM