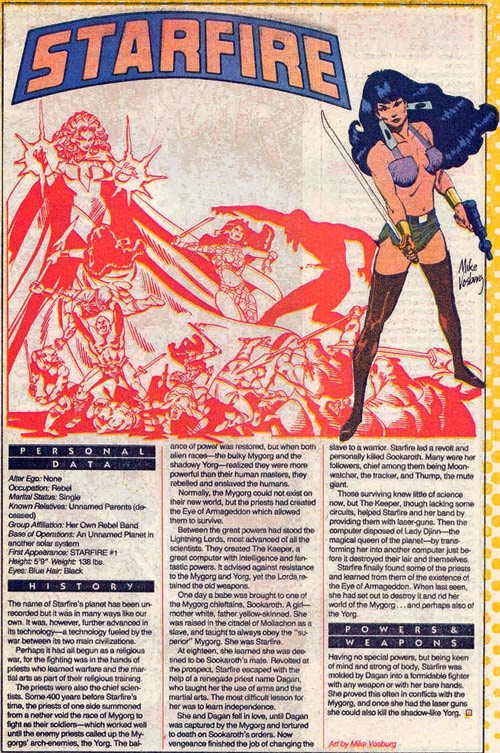 The facts: Four years before the New Teen Titan/Outlaw(ugh) of that name, though eight years AFTER the original Starfire now known as Red Star, there was THIS out-of-continuity(ish) "sword & science" heroine created by David Michelinie and Mike Vosburg in 1976. Would you believe she starred in DC's fourth female-led series ever (after Wonder Woman, Lois Lane and Supergirl)? Well she was, even if that series only lasted 8 issues scripted by various writers (Elliot S! Maggin, Steve Englehart and Tom DeFalco). While it ended without a resolution, she was tagged, along with fellow implosion victim Claw the Unconquered, in Star Hunters #7 (1978; also by Michelinie) as an aspect of the Eternal Champion (not the actual words, but it's got Moorcock written all over it anyway).
How you could have heard of him: She was most recently seen in the Time Masters: Vanishing Point mini-series (2010), where she met Booster Gold, though she has been referenced from time to time, for example Swamp Thing #163 (1996) along with Claw and Nightmaster, and in Starman #55 (1999) where she may or may not have been saved by Starmen II and IV.
Example story: Starfire #2 (1976) by David Michelinie, Mike Vosburg and Vince Colletta 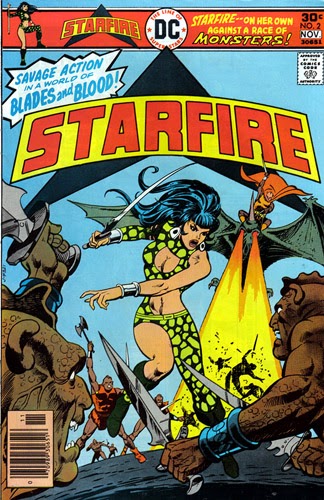 Just a random issue in the run to see what her adventures were like... You'll notice right away she's wearing the green giraffe print number she had for most of the series, switching to the sexy two-piece in the Who's Who entry in the very last one. It's also co-creator David Michelinie's last issue, which I find very strange. I mean, here's a series that takes place in its own world rather than the shared universe, but it gets fobbed off to a new writer (then two more) after a mere two issues? No wonder it failed. Did DC do a lot of this? Because the text piece at the end is about how all their sword & sorcery strips have failed (FINGERS CROSSED!). And we swear it isn't because comics have only 17 pages of story, honest! (The Carter years, eh?)

Annnnnnyway, our story begins with evil alien Mygorgs threatening a kid called Kyrse (a fantasy spelling for Chris, or does his single dad really think of him as a curse?) for "participating in forbidden activities" (uhh...), when former slave girl Starfire and her tank top brigade come to the very violent rescue.

Inset: A Mygorg takes in the face! Now you'd think Kyrse's dad would be grateful, but no. This is just going to attract the attention of more Mygorgs, and no, Kyrse, you may NOT join this gang of rebels. Starfire decides to stick around for the feared Mygorg attack and hungrily wets her blade when it comes. 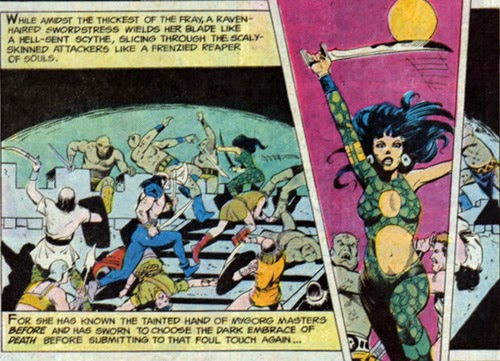 Their "foul touch"..? Are they saying what I think they're saying? 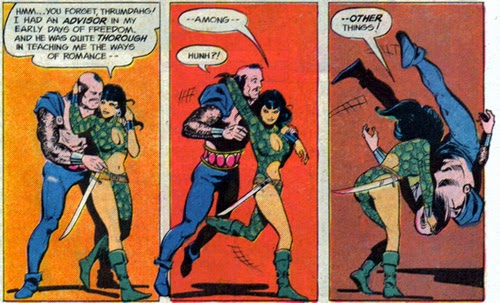 Yep, I guess they are. Starfire was a sex slave. Oh Thrumdang, she's done with that, you creepy, shirtless perv. As for Kyrse, he buys his way into the group with a map that could lead them to the fabled Lightning Lords' secret stash of weapons. You see, when the Mygorgs invaded, they got rid of all the WMDs because it didn't fit their righteous warrior code, plunging this world into the Dark Ages. No one even has firearms. But the code doesn't appear to cover riding cthulhudactyls that fire lasers from their eyes!!! 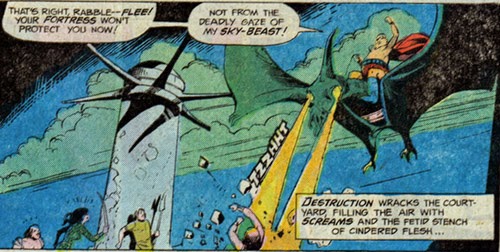 That's a Mygorg boss with a dope skull eye-patch, but he ain't no match for our girl Starfire! She ties the 'dactyl up and forces it into a tailspin that impales the villain on a spiky tower!

This series is all about sex and violence, guys. Freed, the creature goes mad and starts zapping every Mygorg in sight. After the battle, Kyrse decides he can't leave his dad to face the oncoming hordes, so he gives Starfire the map and goes back into his family estate... where he's accidentally shot dead by his father! Oh geez. Manufactured irony. At least Starfire got to keep the map. 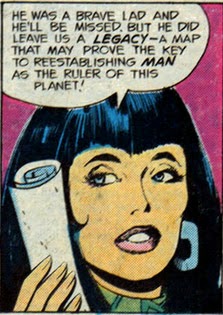 The adventure continues! So that's what that was like, pretty badass fantasy action, at least under the character's original creative team. If Michelinie had stayed on the book and I knew it had a definite resolution, I might actually be interested in collecting the run. From a quarter bin. As it is, it sounds a risky proposition.

Who else? If you were paying attention, you'll know where I'm headed next.
Comics Who's This?

Anj said…
I have a fondness for this character which defies logic. I am a sucker for all the sword/sorcery/scifi titles by DC in the early 70s.

Here is my review of the first issue of the title: http://dcbloodlines.blogspot.com/2012/05/review-starfire-1.html

Wayne Allen Sallee said…
Same here. That odd few years where DC had STARFIRE, CLAW, and STALKER. That issue of STARMAN is insane, with SPACE CABBY being told three different versions of a different Starfire in a fight and at the end of the ride you find out the passengers were Ulttra the Multi-Alien and two others, maybe Tommy Tomorrow.

Fun fact: in STAR HUNTERS, there is the first modern reference to the multiverse.
September 3, 2014 at 12:22 PM

Jeff R. said…
You know, it's one thing to not give the original Starfire a full entry (He did get a write-up as part of the Teen Titans entry), but leaving him out of the character numbering seems like piling insult on top of injury here.

(I'd forgotten about this one and assumed the real Starfire I was the entry of that name when I did by EOotM for the next WW podcast. I guess I have at least two more weeks to edit another Honorable Mention in now though...)
September 3, 2014 at 2:50 PM

Jeff R. said…
Wait, he did get a full entry under the new name. Still don't like the numbering slight here though. If Alan Scott had been going by 'Sentinel' in 1985 they surely wouldn't call Hal Green Lantern I, would they?
September 3, 2014 at 2:59 PM

Siskoid said…
I think there are instances of this elsewhere in Who's Who, actually, but I don't have my stack here at work for productivity reasons.
September 3, 2014 at 3:12 PM

American Hawkman said…
I'll note that Starfire here is the first Asian heroine to have her own title at DC.
September 3, 2014 at 8:08 PM

Siskoid said…
More or less at the same time as Karate Kid did, another Asian(ish) character.

American Hawkman said…
I believe she's the first Asian Heroine with her own book PERIOD, which makes her an interesting footnote.
September 3, 2014 at 9:50 PM

American Hawkman said…
So her solo title predated Supergirl and Lois Lane both?

Siskoid said…
I mentioned Supergirl, but you're right, Lois Lane should be counted too!
September 3, 2014 at 10:54 PM

Siskoid said…
What is WRONG with me today?

Jeff R. said…
Angel (of And The Ape) was the solo headliner when book became Meet Angel, one issue before it got cancelled.

There's also Debbi and Judy (of Date with), as well as Dobie Gillis and Misses Beverly Hills and Melody Lane since you didn't specify 'hero' or any other genre broad enough to count Lois and Starfire but narrow enough to exclude these two.
September 4, 2014 at 2:42 PM