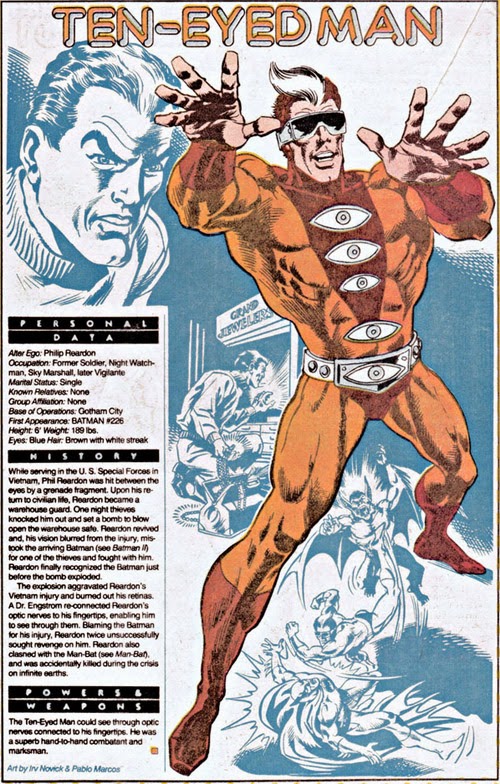 The facts: The Ten-Eyed Man may be a Batman villain, but he only appeared four times before his Who's Who entry. Twice he tangled with the Batman (in Batman 226 and 231, 1970 and 1971 respectively), and once against the Man-Bat (in Man-Bat #2, 1975) which is the only time he actually wore that dreadful costume! For his fourth appearance, in Crisis on Infinite Earths #12, he was accidentally killed.
How you could have heard of him: The character is silly enough that he's been used a few times on the Brave and the Bold cartoon, but in comics? Grant Morrison made him a denizen of Limbo back in Animal Man #23, and he had a cameo on Formerly Known as the Justice League #4. More recently, a crazy version of him appeared in Morrison's Batman (#675) which sounds cool except the art is some of the worst I've ever seen. Lately, a cultist-like version of him has been showing up in Batman Eternal.
Example story: Batman #231 (1971) "Blind Rage of the Ten-Eyed Man" by Frank Robbins, Irv Novick and Dick Giordano 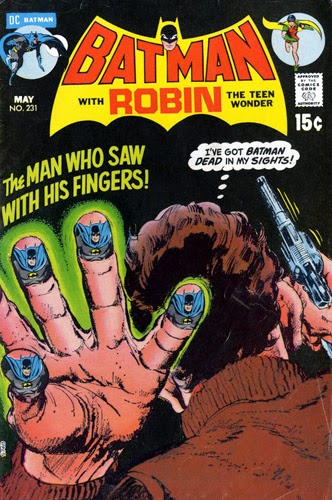 Didn't want to do the origin story, or the single doofy appearance of his supervillain costume, so we're left with his middle appearance, a return engagement with Batman whom he blames for his condition. That condition: Having his optic nerves rewired into his fingertips after a blinding explosion burned out his retinas while he was fighting Batman, completely by mistake. (Well, you've got the entry, just read it!) At the very least, the Ten-Eyed Man allows for some pretty loopy narration: 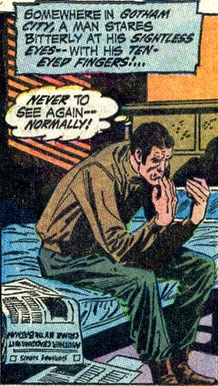 Of course, Reardon hasn't been right in the head since 'Nam, his PTSD now manifesting as Bat-VC nightmares. 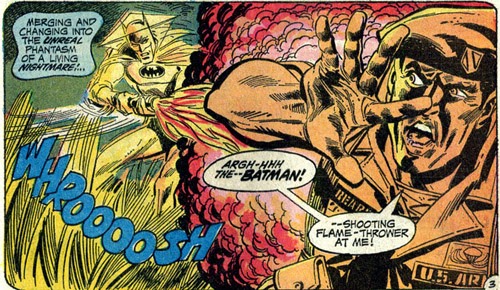 We can sympathize, because he's deeply traumatized by his experiences and unusual handicap. Can you imagine seeing out of your fingers? 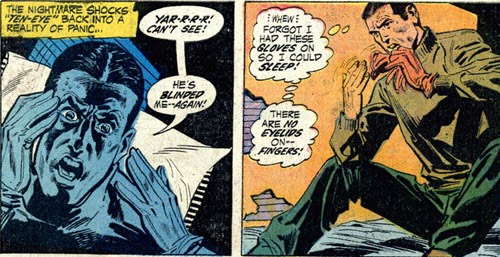 Nature obviously didn't want us to look with our fingers, but then, if it never imagined this scenario, why was it so easy for a mad scientist to reroute optic information through finger neurons? One thing the comic gets wrong (yes, I said ONE thing, shush) is having Ten-Eyed reading with his fingers: 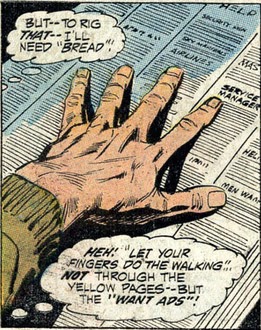 He's not blind and feeling the script! He's sticking his "eyes" right onto the paper, which would just register as darkness, wouldn't it? This job search leads to him getting one as an air marshal, which he's perfect for because he can look many different directions at once. Watch him ace his test: 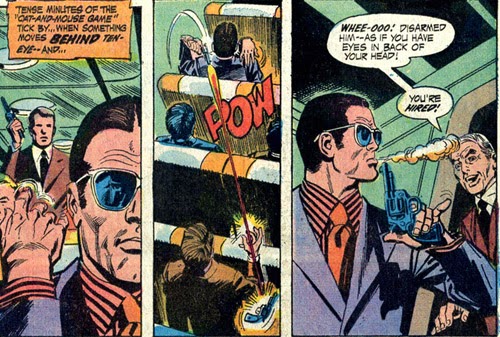 That's not just 360 vision, it's some pretty great marksmanship as well. So he's set for life, right? No need to turn to crime when you have a job you're good at and lots of respect. Well... Ten-Eyed soon abuses his position to hijack a plane, land it in Vietnam, and promise to free the hostages if Batman, International Man of Mystery, comes to the jungle to play a cat and mouse game with him. Obviously, Batman takes the president's call and heads for Southeastern Asia. Batman races after Reardon, avoiding various traps, until a revengeful flash grenade is thrown at him.

He's blind! Ten-Eyed put his hands behind his back, so he's fine, haha! Fine until Batman jumps him when he turns his hands away, and sticks his eyes in mud!

See, Batman was watching Reardon the whole time to see if he'd hide his hands, because naturally, that would mean some blinding event would be imminent. Because villains in Batman's world can always be counted on to follow some specific pathology. Guy was blinded, he will try to blind. Simple. And how do you keep a guy who can look all around him in jail? Well, I'd have said "the same way you'd keep anyone who could see, period", but Gotham is a much crueler place. I've jumped ahead to Man-Bat #2 for Reardon's abominable prison conditions. 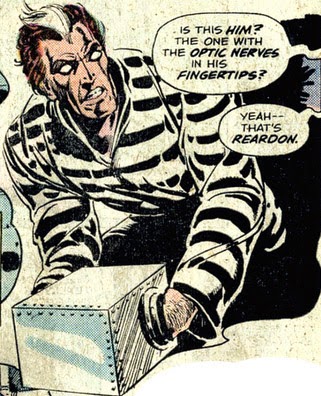 Is it really necessary to keep him blinded at all times?! What is he going to do to the guards with his amazing powers anyway? LOOK at them? Sheesh. The Gotham justice system is just hardening criminals, isn't it?

Played straight like this, he's an interesting figure, I think. Topical and with a superhuman ability that creates new challenges for the Batman. Might have worked better as a crime boss with a quirky skill, possibly. Once he put on a costume, I think that was the death knell for the character, and Crisis' Marv Wolfman was apparently ringing the bell enthusiastically.

Who else? I skipped over fellow loser the Tattooed Man, but the concept has had several iterations, including one that had its own mini-series. Looking ahead, I might be staying in the Batman Family.
Batman Comics Who's This?

Unknown said…
Hello siskoid, is it okay if I ask you a question that has nothing to do with this article? I just went through those issues on another blog, and I want to know the appropriate way of these things.
October 7, 2014 at 3:22 PM

Siskoid said…
Well, I'd rather comments stayed on topic. Is there no topic on the blog that's suitable?
October 7, 2014 at 3:43 PM

JDJarvis said…
No Constitution in the Gotham Penal system.
Keepign a prisoner, bound and blind 24hours a day seems a tiny bit excessive.

I love that job test too, "oh great job" you shot a firearm with a live round over you shoulder during testing, your hired"... probably not the sort of thing that should even happen in the comics.
October 7, 2014 at 5:01 PM

American Hawkman said…
I'll note that the Ten-Eyed Men of the Empty Quarter, based roughly on our guy here, made an appearance in 52.
October 7, 2014 at 6:51 PM

Delta said…
I would love it if these Crisis on Infinite Earths references got a one-panel documentation to go with them. I've read it a bunch of times, but not being DC illuminati, I haven't got the foggiest idea where these minor characters might be appearing.
October 8, 2014 at 2:21 PM

Siskoid said…
The ones that died at least can be found in my Crisis Death Sticky articles, like this one (you don't see 10-eyed very well at all, but I did put up the panel) : http://siskoid.blogspot.ca/2008/07/crisis-death-sticky-part-ii.html
October 8, 2014 at 2:35 PM