November 01, 2014
"If I'm right, this is definitely something you should see." "And if you're wrong?" "Oh well that hardly seems likely, now does it?" 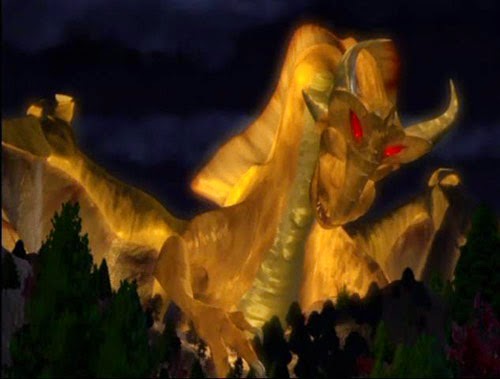 IN THIS ONE... Edward Woodward guest-stars as a Technomage protecting a low-tech planet from Earth strip-mining.

REVIEW: Now I know The Long Road wasn't meant to be the second episode (we're MONTHS after War Zone?) and was only moved up to counter the heavy-handedness of War Zone, which was an imposition from the network, but I can only review the series as it was shown (well, I can do otherwise, but this was my initial commitment). This is prelude to my saying that while Edward Woodward is a great guest-star (there thanks to his son Peter playing Galen?), it is wayyyy too early for anyone to come in from the outside and steal the show. On the one hand, he's great as a multi-dimensional Technomage, a father figure for Galen (cute), a source of witty comedy and zen wisdom, a powerful force that doesn't take himself too seriously but certainly believes in something and will fight for it. On the other, he takes so much space that the cast is reduced to Gideon and Galen with an almost-cameo by Matheson. Like I said, way too early to neglect a crew we hardly know. At this rate, they'll be virtual unknowns by the time the series is cancelled.

I've heard a lot of criticism of JMS' D&D/Arthurian stylings, and I'm certainly not a fan of them, but The Long Road does them fairly well. We're on a Medieval-ish planet, and Woodward's Alwyn is basically their Merlin. He's producing giant dragons and nasty flying demons and all sorts of light shows in the peasants' service, and so on. It's eye candy. But you can't think about Technomages too hard because you'll start seeing them as rather silly. I mean, this is a quasi-religious order that devotes itself to using technology to do magic tricks. What's the point? It's like a hobby that's crossed the line. The reason Alwyn comes across so sympathetically is probably because 1) he's left the order and 2) he has a sense of humor about what he does. The ending is pretty clever, getting the Earthforce ship to destroy their own mine, so Alwyn gets what he wants, teaches the peasants a good lesson after they ditch their values out of desperation and grab hostages, AND makes sure he'll remain unmolested. I just wish Gideon had had more agency in all this. He just seems like a tourist most of the time, unable to convince Earthforce to move operations in the first place.

As for the whole set-up on Regula 4, I'm of two minds about it. For one thing, I've been made to identify with the peasants because historically, something very similar was done to the Acadians by the British (and I'm Acadian). But that's not going to factor in to most viewers' opinion. Even with that background, it's hard to sympathize with these folks when the fate of the entire Earth is at stake. With all its resources, there's no real reason why Earthforce can't relocate these people somewhere else on the planet (still a crime, but better than letting them die). To force the point, the script calls for a young girl (hey it's Allison Lohman from Matchstick Men and Drag Me to Hell!) to almost die from a "health overdose" (yes, I know how stupid that sounds). But though Earthforce personnel are jerks to the end, the peasants find an amicable solution because they really are just decent folk. If Crusade didn't advocate minimalist musical noise, they'd have cued up Family Matters-style violins just then.

REWATCHABILITY: Medium - It's all about Woodward, and director Michael Vejar is always good with special effects wizardry, but that's not what the series needs right now.
Babylon 5

Ryan Lohner said…
A possible Through the Wormhole note, as this story sounds a bit like Star Trek: Insurrection, with the whole conflict being dependent on treating an entire planet as being the size of a city.

Edward Woodward is my father's favorite actor, and the only reason I got him to watch Hot Fuzz. So I'm grateful for that.
November 1, 2014 at 11:50 AM

Siskoid said…
How does he feel about someone hijacking the Equalizer role?
November 6, 2014 at 12:31 PM