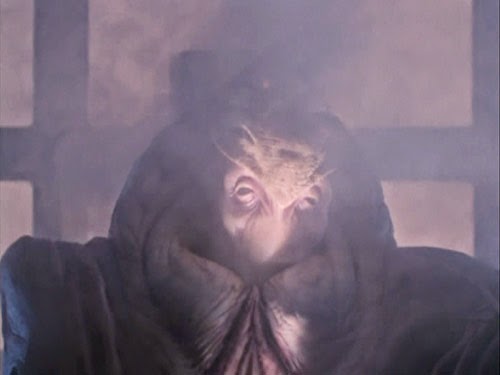 IN THIS ONE... A mysterious alien in a ball makes Gideon, Matheson and Galen to relive moments from their past.

REVIEW: The Sorrow Creature is basically a device for certain characters to flash back to their pasts so we can learn a little something about them, but it's interesting how each person's reaction to the creature is actually informed by that memory. In other words, we're going back to events that very much shaped the way these characters behave today. You know who really needed that experience? Max the crabby archaeologist, because he's really getting on my nerves. And Dr. Whatever her name is who hasn't appeared in, like, forever. Those who get special care are the usual suspects - Gideon, Galen and Matheson - with the teacher's other pet, Dureena, getting shortened development via Galen's goading of her - her skills let people down once, and that's her trauma. It'll have to stay a mystery. The pseudo-mystical frame tale works in large part because Michael Vejar is directing it, injecting kinetic energy in the creature's telepathic contact and playing with the minimalist soundtrack with even more silent telepathic subtitles. It's just subtitles, albeit in the credits' font, but it creates an odd distancing effect. The creature seems more remote and unknowable for it.

As we'll come to find out, the creature is a psychic healer - not the kind of thing Excalibur is really looking for - and allows a person, through telepathic contact, to forgive themselves for past infractions. It's a catharsis engine, if you like. For Matheson, that means reliving his betrayal of the Corps during the Lyta-driven rebellion (a scene almost makes us think she's appear in person). It's the moment he goes from a drone who looks the other way to a person whose conscience will no longer let him stand by while the Corps does whatever bad stuff the Corps does. He restores a rebel's telepathic powers, which results in the destruction of the secret PsiCorps base and a boatload of guilt for Matheson, one of the few survivors. His first reaction to the alien was to wonder if it was imprisoned, suffering, something informed by his relationship to the rebel he helped. This is who he is. Galen too suffers from survivor guilt, if of a more personal kind. We flash back to his lover Isabelle's death - a rather melodramatic affair - which has bred a nasty streak of nihilism in him. For Galen, there is no design to the universe, only random heartache. He rejects the creature, rejects the catharsis it offers, and we see him looping around the ship on one of its horizontal "lifts", over and over, caught in that mode of thinking. Even when Isabelle reaches out from the ether with a message, something she promised she'd do to prove there was an afterlife and thus a design, he rejects the notion.

Unlike the others, Gideon gets two sequences instead of one. The first expands what we know of his rescue by Galen years ago (2259, so 8 years before the events of Crusade, the year President Santiago was assassinated). He's an ensign in the memory, so it seems that even though he was a troublemaker, he climbed his way up to captain rather quickly. Well, Earthforce did lose a LOT of people in the Shadow and Civil Wars. It's not a ship we know, but we can infer he saw Shadows before Shadows were known to exist, and a Technomage fleet exiting known space as per the Elric episode. Beautiful evac scenes, and is it just this episode, or is outer space in Crusade a lot less colorful? The stark black and white  backdrop works for the sequence, but I wonder what prompted the change, if indeed things have changed. Again we have survivor's guilt, and it has shaped Gideon so that he will now never leave a man behind. This is why he wanted to bring the creature back with him; it's who he is. The second sequence is more mysterious. He's now a scruffy lieutenant and wins a magic box in a game of poker. This "Apocalypse Box" is apparently cursed, because its previous owner soon dies in an accident, but happy for being free of its influence. Does Gideon still have this box that reveals things and sometimes lies? The episode suggests he does. Will the show have time to tell us more before it all ends? I don't know. Because we're watching all this with hindsight, a lot of what made Babylon 5 work was that we knew mysteries would be solved, things would be paid off. With Crusade's abortive half-season, it's the opposite, and frustration mounts.

ON THE OTHER SIDE OF THE WORMHOLE: Deep Space Nine's "Rivals" also featured a device that gamblers used to give them luck, but which could cause terrible karmic backlash.

REWATCHABILITY: Medium-High - A well-directed character study with a "secret origins" format; if Crusade's plots are still hard to make work, at least the character development is on its way.
Babylon 5

Ryan Lohner said…
Suddenly I'm very glad I decided to skip this show. The entire first book of the Techno-Mage trilogy (which I've already noted is easily the best of the B5 novels) is spent building to Isabelle's death, and without knowing what was coming it was quite the horrible shock. There was every sign that the main trio would be our heroes for the whole story, and instead one betrays the other two, and another dies. It's not quite the game changer that the end of The Golden Compass is (still my high water mark for this kind of thing), but it's definitely in the same ballpark. There's no way that the scene on its own could have anywhere near the same power; you need that time of getting to know Isabelle, and seeing their relationship develop. And then book three where Galen gets his revenge and makes his peace with it doesn't happen until after this series, so there isn't even any hope of a payoff for it.
November 3, 2014 at 10:11 AM

Siskoid said…
Seeing as the broadcast order buries Isabelle before you see her die, there was absolutely no way it would come as a shock.
November 3, 2014 at 10:21 AM

Cradok said…
The telepath that Matheson helps was originally supposed to be Lyta, but she was already booked, so we got someone random instead.
November 3, 2014 at 2:42 PM

LiamKav said…
I'd heard that it was that they couldn't afford Tallman, rather than she was booked. I accept that I could have heard unsubstantiated rumours, though.

Also, was this going to be the point where it would have been revealed that Lennier sacrificed his life to save Lyta, because what better redemption could there be for the character than saving the life of someone he'd barely exchanged two words with over a war that had nothing to do with him?
November 6, 2014 at 9:47 AM

Siskoid said…
I can't believe Tallman would come at too high a price. If she was still doing stunt work, then getting over-booked is a stronger possibility.
November 6, 2014 at 12:30 PM