November 14, 2014
"Before man can seek salvation, there must be the smell of damnation." 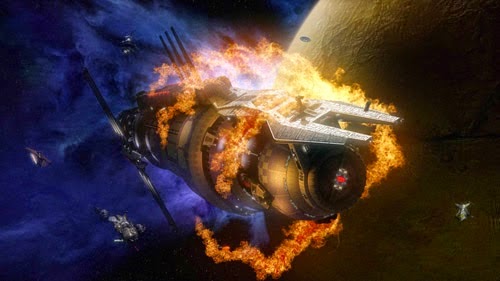 IN THIS ONE... Lochley invites a priest to Babylon 5 to conduct an exorcism.

REVIEW: Getting us back into the groove, this 2007 DVD release returns to the destruction of Babylon 5, with the same beautiful music and updated effects. Manipulative, but you know you love it. Then the calendar is set back, and suddenly that B5-shaped cloud isn't debris, but a nebula, and we turn around to face the station 10 years after the founding of the Interstellar Alliance. Colonel Lochley is still in charge, and in fact, the only franchise character in the story. For a while there, it's not even clear this story is about her, but I'm getting ahead of myself. Before diving into the plot, let's just say that while The Lost Tales were done on the cheap, with two or three sets and a minimum of actors, it does offer much updated CG of the station, both inside and out. It looks good, especially the rounded floor of that shuttle bay (man, I wish they'd have done the terraformed interior of the main cylinder). Sounds good too, with fine funereal music to accompany what is essentially a horror story.

Over Here deals with a crewman possessed by the Devil (or A devil) and the priest called in by Lochley and played by the always dependable Alan Scarfe, whose dilemma becomes whether to show the demon to the world and thus give religion a much-needed boost; or exorcise him now and risk his soul for refusing this gift from God. It's an interesting question, and both Scarfe and the possession-playing Bruce Ramsey a excellent in the two-hander, but it's Lochley (ah, finally) who cracks it. Playing the detective, she catches the demon in a lie, namely that he WASN'T seeded in the stars, but wants to be released to them. Both the choices he offered had him eventually exorcised on the station, but seems like the crewman had just returned from a vacation on Earth, and so... The demon was Earthbound and hitched a ride. Lochley has never been so badass as when she faces down the Devil and tells him she'll be sending him back to Hell. Hell being Earth, and Earth destined to be destroyed a million years hence, with holy humanity off-world, and the devilish evil trapped in a sublimating prison. We're in a small cell for most of the episode, but JMS manages to make it huge and epic. Wow.

But is it a Babylon 5 story? If you're going to try and resurrect the series in some form, is this the kind of tale you should be telling? A one-off supernatural story that unequivocally confirms the existence of God and Satan, of Heaven and Hell? (That's as maybe. I'm sure I can use my SF knowledge and on-screen evidence to suggest something else is going on, if I want to be real secular about it.) Only at the end, when Lochley makes reference to the events depicted in The Deconstruction of Falling Stars, intimating an even greater master plan than before, a REASON why humanity must move to the stars, become akin to First Ones, etc., that Over Here becomes a worthwhile piece of the puzzle. JMS might be over-egging the Messiah pudding, but that's what B5 is all about.

REWATCHABILITY: Medium-High - I was afraid this was going to be slightly irrelevant and not at all about Lochley except as a story enabler, but JMS saved it at the end, he really did.
Babylon 5

Ryan Lohner said…
I'd just recently finished watching the show for the first time when Lost Tales came out, so I was excited as hell that there was actually more to watch. And then this...thing arrived.

I have no idea what the hell JMS was thinking introducing a demon from Hell into the B5 universe. The best I can figure is that it's actually supposed to be an alien who just inspired the Christian idea of Hell, but if that's the case he really needed to make it clearer. As is, it reminds me of nothing so much as the original, even worse script for Star Trek V, in which the villain was the actual, literal Devil (and Kirk beat him in a fistfight, because Shatner's ego was just that huge).

Another thing that really killed it was when Lochley reveals how she figured it out. And then she says it again in slightly different wording. And then again, and again, like JMS couldn't figure out which version of the speech he preferred so he just threw them all in. It ends up making Lochley look like a huge drama queen that she never was before.

Siskoid said…
I'm starting to think the way I watched these, i.e. not at the time, and not after a long wait, colored my perception of these last few bits and bobs. Expectations play an important part in our perceptions.

Between Rangers and Over Here, I get the idea that JMS was developing super-ancient threats that predate even the First Ones. They're just as alien as the Vorlons and Shadows, who also seemed supernatural. Think Technomage to the Nth power. The devil here is just an energy being that can possess people.
November 14, 2014 at 11:07 AM