Who Are TNT and Dan the Dyna-Mite? 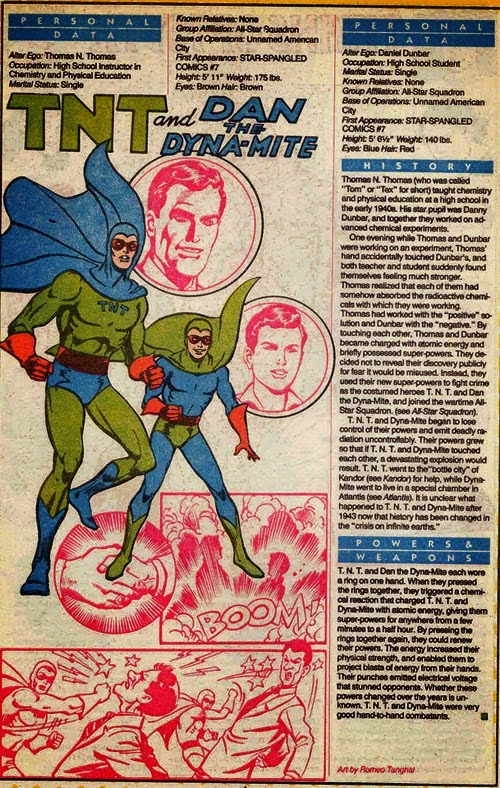 The facts: TNT and Dan both made their debut in Star-Spangled Comics #7 (1942), already a twosome, no waiting. The "human hand grenades" lasted as a feature in that book until issue #23 (1943), with one appearance (actually their second) in World's Finest #5, a story reprinted in 1973's 100-Page Super Spectacular. The duo next appeared in Super-Friends #12 (1978), and from there, in a handful of All-Star Squadrons. They were created by Mort Weisinger.
How you could have heard of him: Dan the Dyna-Mite was a headliner in Young All-Stars, the first issue of which violently killed his adult partner (Axis Amerika's Valkyrie did it). In the 90s, Dan appeared in James Robinson's The Golden Age, his body taken over by the Ultra-Humanite, and in the early 2000s, was shown to be a member of Old Justice (in several issues of Young Justice) and one of the 7 Soldiers of Victory massacred massacred at the start of Morrison's project, as Dyno-Mite Dan (though I believe this was someone else under the mask). DCU: Legacies #2 (2010) makes TNT and Dan founding members of the original 7 Soldiers, apparently replacing the Golden Age Green Arrow and Speedy on that team.
Example story: Star Spangled Comics #15 (1942), "The Log of the Lucky Lode", art by Louis Cazeneuve, writer unknown 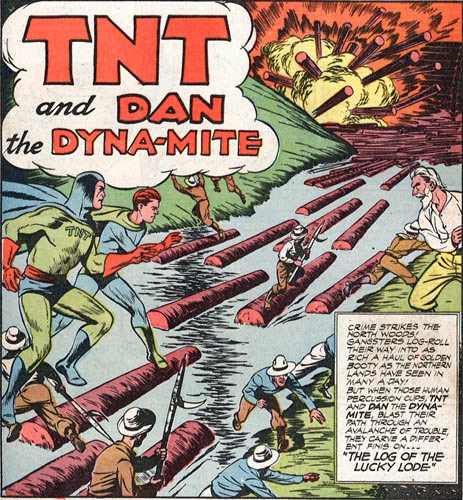 Though TNT and Dan the Dyna-Mite's stories were usually near the end of any given issue of Star Spangled, #15's tale comes second, right after the Newsboy Legion's. AND it features crimes committed in Canada. How could I resist? (It's not even a case of propagating the lumberjack cliché, since those scenes actually take place in the U.S.) So there's been a crime spree and literally tons of gold ingots and coins have been stolen from Canadian banks (ow! our economy!). The Mounties have locked up the border and are searching all vehicles coming through for the stolen gold. Alas... 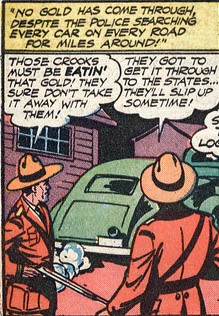 In the Northern United States, TNT and Dan the Dyna-Mite are driving around trying to solve the mystery of, get this, stolen logs. Completely unrelated to all this, a man at the Lucky Lode Lumber Camp asks them for help getting rid of a log-jam blocking the river. Someone's stolen his dynamite! Well, that sounds like a job ready-made for a superhero codenamed "TNT". 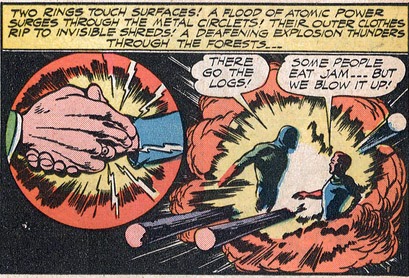 "Their outer clothes rip to invisible shreds." Being a superhero is hard on the wardrobe. You'll note that TNT and Dan don't yet wear masks; those only showed up late in their run. Anyway, the logs weren't filled with wood as you might expect:

Oh Dan, you're such a nitwit. And now we know how the crooks smuggled the gold across the border. Ingenious! But wait, the plot thickens, courtesy of a "grim hermit" who hears the blast and jumps to the conclusion that they're killing his "friends" with dynamite! 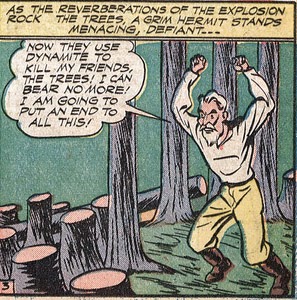 His friends, the trees. He's stolen the camp's dynamite and to stop this clear-cutting operation, he blows up a dam. That stops TNT and Dan right in their tracks. 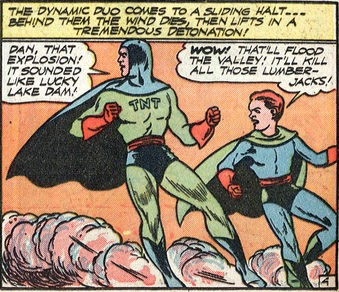 Superheroes against eco-terrorism. They were well before their time. Time for another explosive handshake, I think. 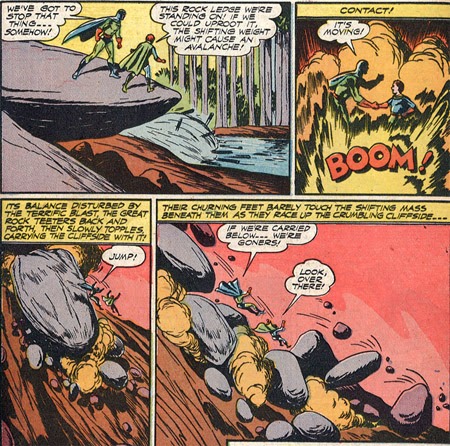 This kind of thing must happen to them all the time. There's no controlling an explosion like that. Miraculously, they slide down the avalanche right to the crooks' hideout in a giant redwood, with a papier maché door. Those tree killers survived, so the hermit will try to blow them up more directly. Meanwhile, the boys deal with the gold thieves the old-fashioned way - with their electric fists! 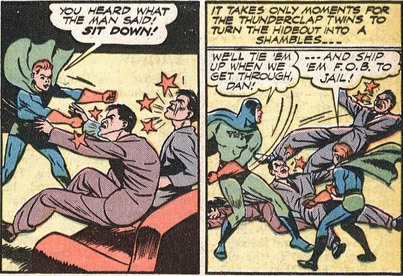 Once that's done, they stop the old timer and tell him what's what. Lumberjacks don't kill trees; houses and furniture kill trees. 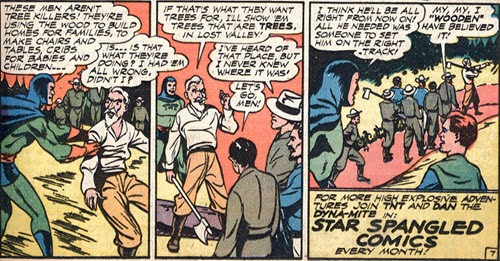 What we've learned:
1) Murder is okay if it's to make a crib for a baby.
2) The hermit only calls certain trees his friends; those acorn-holes in Lost Valley can go to the wood chipper for all he cares.
And 3) Dan's puns are just the WORST.

Who else? That was all in the past. I'm next looking to the future!
Canada Comics Golden Age Who's This?

wordsmith said…
W: So get this: We take Batman and Robin, and we give them SUPERPOWERS!
Ed: So, why aren't they wearing masks?
W: 'Cause Superman doesn't! And we have Dan the Dyna-Mite (he's Robin) make terrible puns, just like the REAL Robin.

I first came across this pair in the July, '73 Superman 100-page Super-Spectacular #DC-18, which notably included "The Amazing Story of Superman-Red and Superman-Blue", which was so upbeat it instantly became my favorite all-time Silver Age story; TNT and Dan the Dyna-Mite...meh, not so much.
October 21, 2015 at 3:01 PM

tlyoung88 said…
I'm looking for their origin story, but don't have access to the notes in the ASQ series. What issue was it in? And did we ever meet Dan Dunbar's parents in the Golden Age, or only in Young All Stars?
August 1, 2022 at 10:02 PM