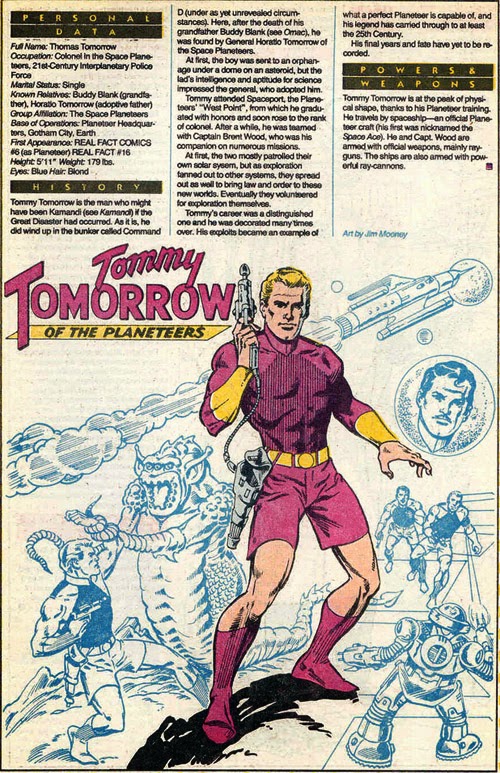 The facts: A character called Tommy Tomorrow first appeared in Real Fact Comics #6 (1947) and then in #8, #13 and #16. His creation was credited to Jack Schiff, George Kashdan, Bernie Breslauer, Howard Sherman and Virgil Finlay (a lot of people for a 4-page story). But these first few adventures contradict everything that followed and are usually considered apocryphal. The first true Tommy Tomorrow story thus be identified as "The Interplanetary Aquarium" in Action Comics #127 (1948). He would remain a consistent feature in that book until #251 (1959), with an appearance in a Supergirl story in #255. He would then move to World's Finest Comics and stay there from #102 to #124 (1962). Most of the stories were crafted by Otto Binder and Jim Mooney. With such longevity, it's no surprise DC tried to spin him off into his own book, but a 5-issue try-out in Showcase #41-43, 46-47 the next year courtesy of Arnold Drake and Lee Elias, didn't work out for him. He would appear a couple times in the late 70s (DC Special #27 and Showcase #100), as a TV show on Earth-1 (for example in The New Adventures of Superboy #24)  and in the occasional reprint. The events of the first Crisis (actually, History of the DC Universe) would invent that connection to OMAC and Kamadi as a kind of postscript.
How you could have heard of him: Tommy was a featured player (more or less a villainous one) in Howard Chaykin's Twilight mini-series, and has had cameos whenever DC's space opera future has been evoked. The name turns up Stan Lee's Just Imagine series, Starman One Million says Tommy Tomorrow II was a prominent Starman, there's a Captain Tomorrow in the Trek/Legion crossover, and a Major Tomorrow of the Planeteers is referenced in Magog #7, but that's really the extent of Tommy's post-Crisis career. He's been an Easter Egg more than a character.
Example story: Action Comics #235 (1957) "The Interplanetary Joy Ride" by Otto Binder and Jim Mooney 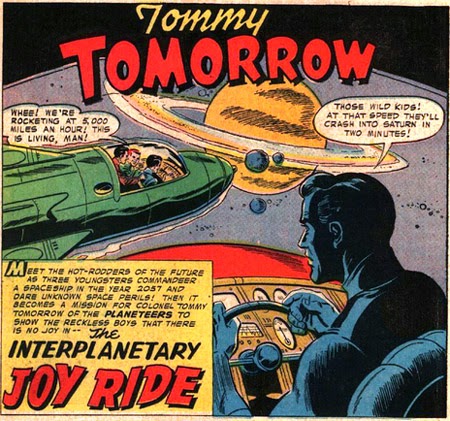 Most Tommy Tomorrow tales have "Interstellar" or "Space" in their titles. And most, I dare say, take a very Silver Agey approach to the space opera genre. In this one, set in 2057 (which is a little more realistic than Tommy's original time line where he graduated from the Academy in 1988!), three unruly teenagers decide to play hooky, break into a spaceport, and steal a spaceship. You know, as bored kids might. 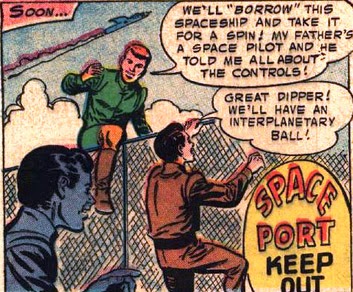 "Robo" (the others are Jonny and Hank) was "told" about the controls, so what could go wrong? It's the future, flying spacecraft through near (and as we'll soon find out, cluttered) space has become fairly intuitive. Ok, the kids almost hit a large freighter, but give Robo a chance. He'll get the hang of it. A report gets to Planeteer HQ, and it's Colonel Tommy Tomorrow's job to tow them back to port.

So either the Planeteers really are the interstellar equivalent of traffic cops, or rank doesn't carry very much privilege. In the meantime, the kids are having trouble with the ship, not so much the flying of it, but the random button pushing has unforeseen effects. 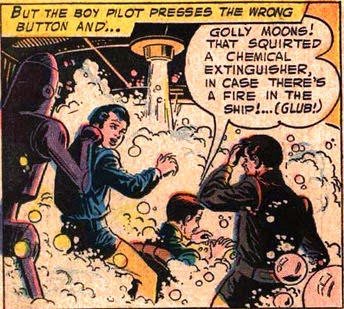 First, a robot guard meant to handle any crooks who might invade the ship, BUT ONLY IF THE CROOKS PUSH A BUTTON, pops out and starts arresting them, and then another button starts pouring on the chemical fire extinguisher. But no worries, both things are deactivated if you push the same buttons again. By the time Tommy finds them, they've got things under control and are up to some hijinks.

This is what humanity will do once it gets to the stars. Like artists are ever going to afford going off-world. Ha! When Tommy orders them back to Earth, the rabble-rousers instead flip him off. Tommy's solution is reverse-psychology. He tells them he has an important mission to perform, so they better not try to follow him because only expert spacemen can go where he'll go. 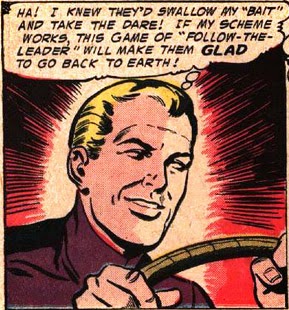 First he tricks them into landing on an erratically spinning asteroid and makes them sick. 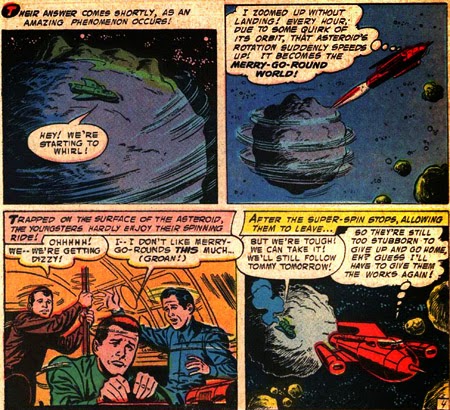 But they don't give up, so he takes them to space's most dangerous publicity signage:

They survive this hazard, so he takes them to... well... a picture is worth a thousand words. 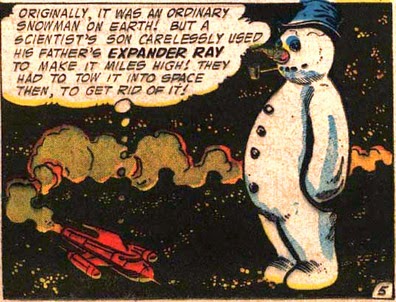 The future is a place where references to expander rays can be thrown out with careless abandon and towing a giant snowman into space is easier and cheaper than letting it melt. The kids try to bump its hat off for no other reason than "haw haw!", but get stuck when their fuel freezes. 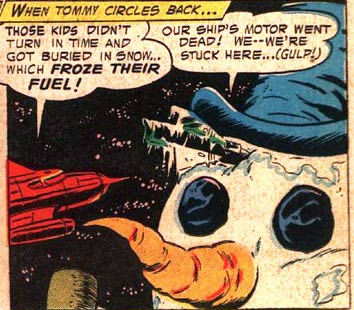 Because this unholy snowman is COLDER THAN SPACE ITSELF! Now they don't have a choice BUT to give up, and Tommy tows them back to Earth. But he goes real easy on them. Check out this futuristic compassion:

Not only does he let them go with a warning, but he also sends them a board game later! That's some pretty evolved thinking for a 1950s character, focusing on reforming criminals rather than punishing them. Or is it more of that "boys will be boys" nonsense the writer was espousing earlier? What does it take for the space police to get those kids off my damn space lawn?!

Who else? Skipped over Tobias Whale, too well known as Black Lightning's only villain of note; Tokamak because he was part of Firestorm's greatest ever arc when I was a kid, so I can't bring myself to think of him as obscure; and Tomahawk's Rangers, who don't particularly interest me. Besides, our next stop will almost certainly feature the American Frontier.
Comics Silver Age Who's This?

Arion said…
I think I've never read a Tommy Tomorrow story, but I seem to remember the character popping up in some title in the 80s.

Anonymous said…
I might consider putting Tommy tomorrow in my Kamandi story. Besides it would be nice to see a story about his family and how they survived and died in the great disaster and how some of the Apes and other Empires pray for the days of the mighty one known as Superman to return in this planet of the apes Mad Max Lord of the Rings post-apocalypse universe
June 6, 2022 at 11:59 PM