January 07, 2015
The feature inspired by great cosplay and fan art where I imagine various DC properties taken to the small screen and wonder aloud just what their shows would be like. Today's pitch: The Question. 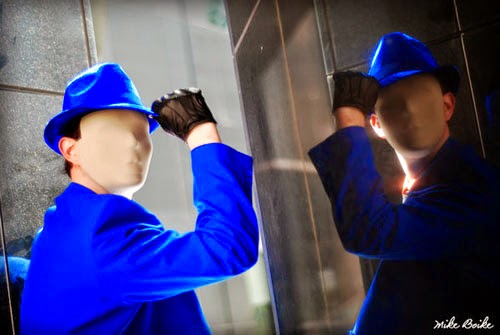 Well, people liked Rorschach in the Watchmen movie, right? So they would buy the idea of a similar - actually precursor - hero, right? Even without the ink blots, the Question's is a great visual, and his show could take different tacks. Of the various portrayals, I wouldn't go for Ditko's objectivist hero (because I hate objectivism with a passion), nor for O'Neil's zen violence (though he can certainly inhabit the cess pool that is Hub City). No, I think the best interpretation, especially given that other shows (Arrow, Gotham) are already doing the cess pool thin, is Justice League Unlimited's conspiracy nut.

Man, I might even cast Jeffrey Coombs for the hell of it.

But think about it. A lot of genre shows these days thrive on long arcs that usually involve some element of conspiracy. The Question, a sort of superhero Mulder, would explore elements of that conspiracy, even cross over with other heroes' conspiracies! The twist is that he sounds like a complete lunatic, but his craziest theories turn out to be right. Some satire is definitely in order, and making Vic Sage a "news" channel hack editorialist/fearmonger might prove fertile ground for laughs, but also to use the media to take down powerful opponents. Each season he'd beat some malignant secret society and discover there's another behind it, higher up (as in Chuck), going, for example, from the 2000 Committee to the Kobra Cult to Vandal Savage's Illuminati and beyond.

Question is, could you stand the fun?
Arrowed TV

American Hawkman said…
NBC's Life was one faceless mask away from a Denny O'Neill Question series with Rucka's Montoya along for the ride and I loved it unconditionally. It'd be hard to top any portion of it. (Whole series is on Netflix... worth watching, to say the least.) If I were doing a Question series, I'd just rehire all those people and play up the conspiracy wall more to add the JLU Question more. I curse the writer's strike daily for killing it in it's cradle, despite it lasting a season afterward.
January 7, 2015 at 3:53 PM

Jeff R. said…
Most forms of the Question have him even more of a loner than the average masked vigilante, and it's really tough to do a TV show with only one character. (Even the Hulk needed a regular adversary.)

So I'm leaning toward the O'Neill/52 version for those reasons.

Although I'm getting a flash of a Person-of-Interest type anthology format (And POI is basically Quantum Leap, which is basically the Hulk/The Fugitive anyhow.), where the Question harasses a different person each weak until they start asking the right questions and step into a heroic role, then he provides support and resolves the issue of the week...
January 7, 2015 at 4:35 PM