Snapshots of Jimmy Olsen #5: The Wolf-Man of Metropolis 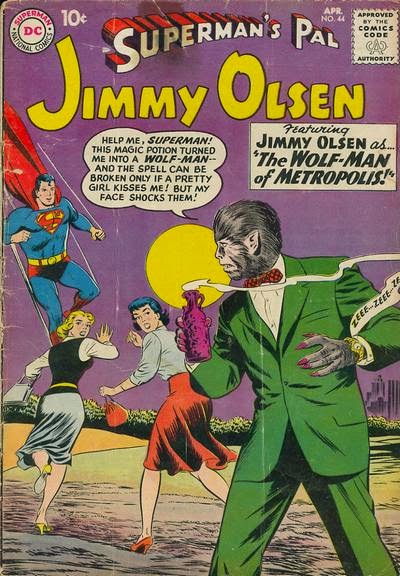 "The Wolf-Man of Metropolis!" is a blatant metaphor for Jimmy's desire for Lucy Lane. Simple as that. The story opens on a long post-date kiss between them, and Jimmy begging for seconds. But Lucy is a proper 1960 girl, and he'll just have to wait for the end of the next date, tomorrow's masquerade ball. He's in charge of the costumes, and if they're good, maybe he'll get TWO kisses.

Moving beyond this exploration of Metropolis' kiss economy, we find Lois and Jimmy working at the Planet the next day, when Superman flies in to give them a box of magic potions that once belonged to Merlin. Somehow, their go-to story isn't "Superman Robs Tomb, Endangers World with Magic". 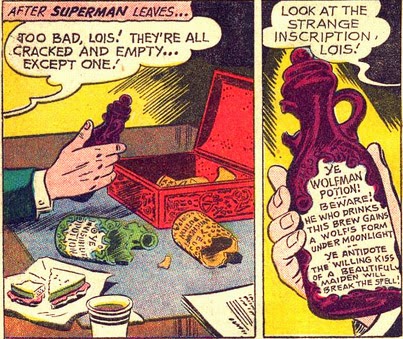 One bottle isn't broken, and it promises a lycanthropic curse until the drinker is kissed by a beautiful maiden. So of course, Jimmy washes down his sandwich with it. By the time he gets home with his Romeo & Juliet costumes, he finds the curse he was laughing at was real, and since the sun has set down, he is indeed a wolf. But there's no cancelling the date! He bounces back by changing Lucy's costume: They can go as Little Red Riding Hood and the Big Bad Wolf!

Anyway, Lucy is a beautiful maiden, and he's owed a kiss or two, right? Well, not with that mask on, buster, no matter how many best costume ribbons you win!

But if Lucy won't kiss him - and admit it, this already took suspension of disbelief - who will? He'll be stuck changing into a Wolf-Man every night, for the rest of his life. Worse, he'll have to make flimsy excuses to explain his hirsute appearance (now he'll know how Clark Kent feels). But of course, Lois is soon on his trail, she's the ultimate secret identity sniffer! 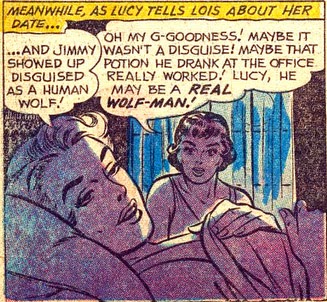 Dangerous: Lois could spiral into an obsession to expose Jimmy's wolfen nature. You know how she gets. But he looks normal during the day, so for now, Lois lets it go. The next day, Jimmy is assigned to cover a movie producer's big monster movie launch. Obviously, he's gonna get his ass shuffled onto the casting couch to cover his appearance. 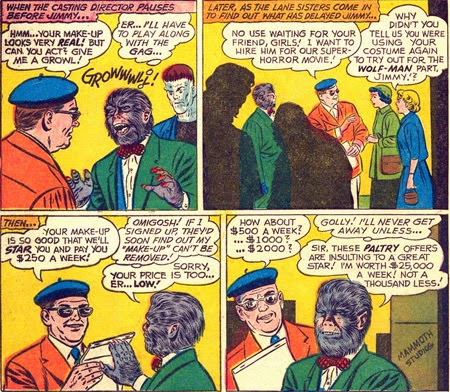 After refusing obscene amounts of many to cash in on his curse, even in the short term, Jimmy takes to the park where he tries to pay women for sexual favors. 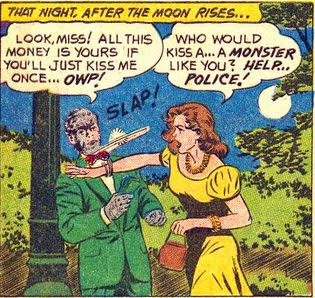 It's just kissing, you'll say. Yeah, but kissing is a gateway drug. And if you pay for one, it's a slippery slope to finding yourself in a motel room praying on some poor girl's meth addiction. Shame on you Jimmy. The slap makes him finally call Superman (who created this whole scenario, I'll remind you). The Man of Steel is going to give this one some thought, and he leaves Jimmy ravenously devouring a chicken, starting to feel his grasp on his humanity slip away. The next day, Jimmy is piloting the Flying Newsroom when some heavy winds strand him in the air too long. The sun has set by the time he gets to land, and running on fumes, he heads for the nearest rooftop, which so happens to be Lois and Lucy's apartment building's roof terrace. 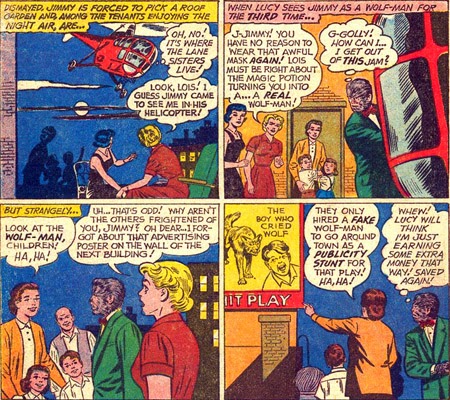 Lucy is halfway between distress that her boyfriend might really be a werewolf (word not used in story in deference to the Comics Code Authority) and anger that he might love that mask more than her. But again with the weird excuses and serendipitous coincidences. That was the Silver Age's super-power.

So finally Superman shows up with a cure for what ails ya. He brings Jimmy to darkened room where "Miss X" kisses him back to his old ginger self.

Have you guessed who Miss X was? If you said Superman's "secret weapon" Supergirl, then you were right! If I didn't know any better, I'd say this who situation was engineered by the Man of Steel to match his cousin to his best pal. It certainly does a number on Jimmy's relationship to Lucy! 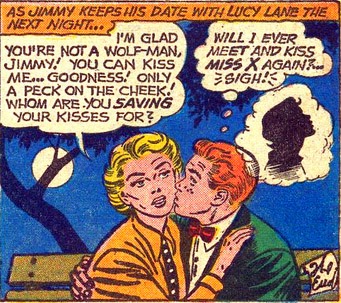 SallyP said…
This only confirms my belief that the TRUE monster in the story, is of course, Lucy Lane.
January 31, 2015 at 2:57 PM