January 18, 2015
Alpha comes across a planet that turns them into cave-people. 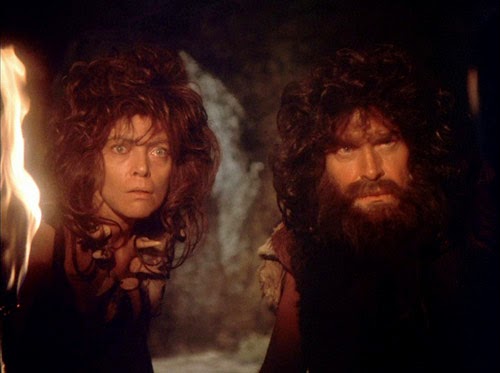 WHEN: The episode first aired on Dec.11 1975, 15th in broadcast AND production order.

OH THE NOSTALGIA! In French, this was called "Le grand cercle", which translates as "The Big Circle". I vaguely remember the buggy driving that's in it, but that could be from a later episode.

REVIEW: What Space 1999 does best is a) atmosphere and b) procedural. It's the flights of inexplicable sf-fantasy that do it harm. The Full Circle is then perhaps one of the best showcases of the show's strengths and weaknesses. It starts off well enough, with a planet that, for once, actually LOOKS Earth-like from space. A reconnaissance team has gone missing, and while I'm not sure bringing back their Eagle by remote - when just going there with another will actually save time - is doing them any favors, but everything after that is well thought-out. We see how a rescue mission is planned and carried out, even some moon buggy action on a swampy primeval planet. And great atmosphere throughout, with pleasant mists and bubbling ponds all over; Black Park really is a gorgeous location.

But here's the problem. The episode hinges on a "time warp" turning Alphans into cavemen, regressing them physically and culturally, their clothes turning to furs, and their cave already filled with trophies. Walking back through the mists cures you, your mind and your clothes as if nothing happened. When characters later say "Don't ask me how", it sounds like the writing staff's credo, and it's damn irritating. There's  quite a lot of caveman action, with lots of irksome screeches and guttural noises, but it's at least building up to the shocking moment when Sandra recognizes two of the cave people as Koenig and Helena. The make-up is so well done, they have to throw inserts shots into the edit. If you LIKE caveman action - and I admit I've been known to enjoy it on occasion (Quest for Fire, West of Eden, GURPS Ice Age) - it's got cave politics, primitive rituals, raw emotion, even a guy getting thrown into a fire. It's a pretty violent episode.

There is at least some attention paid to character development, though as is usual in Space 1999, it's kept in the background. Koenig's complete trust in Victor is manifested in his leaving his friend behind. There are several references to the Paul-Sandra and Koenig-Helena pairings (had the show been made in the late 80s or later, these match-ups would have been the focus of an entire episode; here, they just happened naturally at some point). Sandra does need a bit more development, however. She's gone from fainting in one of the first episodes to screaming her head off in this one. She's the damsel in distress, because Helena, the other female character, is too self-possessed to play that role. At least she resists, and almost bashes cave-Koenig's head in, but she's mostly there for cavemen to get rapey with her or as a human sacrifice. I'd like her to be less of a victim; I'm sure the actress would to.

HEY, ISN'T THAT... Black Park as the planet Retha; in 1980, Doctor Who would film a serial called "Full Circle" there. Hm, there must be something about that location.

REWATCHABILITY: Medium - Falls right in the middle, doesn't it? It's got the horror atmosphere and astronaut procedural Space 1999 does well, AND it's got a mildly annoying nonsense plot. Somehow, the ayes still have it.
Space 1999

Anonymous said…
What its got is the character of Sandra running around in a leopard skin.