January 03, 2015
An alien vessel, bound for Earth, lands on the moon. Its crew is greeted as friends by all, except Commissioner Simmonds who sees the vessel as way to return home. 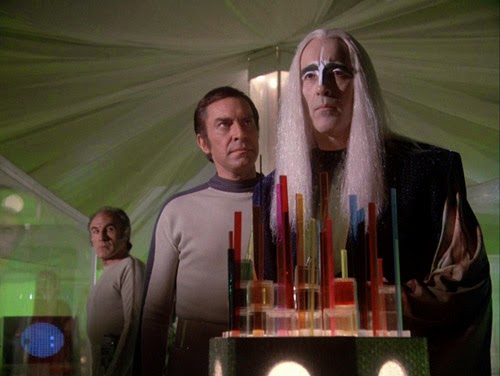 WHEN: The episode takes place a few weeks after Breakaway; the Alphans are still adjusting and the date is still 1999. It first aired on Jan.19 1976, 14th in the broadcast order (which is absurd because we are clearly still close to Earth; in fact, the BBC repeats, which used the production order where it is 5th, ran it 2nd).

OH THE NOSTALGIA! I would have seen this episode in French as "Direction Terre" ("Destination: Earth"), but have no recollections of it.

REVIEW: While the idea of an antagonistic Alphan is theoretically a good one, Simmonds is probably too high up the food chain to be anything but irritating in the long run. He's got to go. He WANTS to go. Heck, everyone would rather he be GONE. Koenig is refreshingly frank about that. He is so overbearing, there'd absolutely no way he wouldn't have been back seat-driving every mission from Breakaway on. He would have sat on every meeting, paced in Main Mission every episode, and demanded efforts were made to go back to Earth every other scene. A man of his political stature simply can't stand not being part of Koenig's inner circle. He needs to exercise his leadership. And that's why this episode must come second in the viewing order. Besides, it's still early enough that he wouldn't have given up hope. So why DON'T they let him go when he has the chance? Koenig wants the decision to be an objective one, and leaves it up to the computer. This is the second time in a row he's put the computer in charge, and this time, though it prods him to make a choice by giving three possible answers, there's no big, honking HUMAN DECISION REQUIRED screen. It's perhaps giving the show too much credit to say it's slowly building up the theme of self-reliance by showing humanity incapable, at this early stage in the journey, of making the hard decisions alone, but the Alphans need to evolve away from this kind of thing for that theme to make sense. Still, one can respect Koenig's ultimately unmilitaristic leadership style as the antithesis of Simmonds' - he's all about transparency, democracy and accountability.

So they meet aliens, and it's not a big "we are not alone" epiphany. Humans have clearly been in contact with alien races before. Or had some indication that they existed, at least. Acceptable, given the number of alien races we're likely to meet over the next two seasons. This is a busy universe. The Kaldorians we meet here are humanoid, their alienness more a factor of their culture and technology. Their ship is rather dinky, not the best model the show will produce, but the interior does have a certain ethereal atmosphere (even if it does look like a museum exhibit) that goes well with the Kaldorians' spiritual culture. They accept one of their own has died accidentally, give their comrade a funeral ceremony, profess pacifism, are ready to commit ritual suicide if Earth will not take them as refugees, and generally try to do the right thing. The fact that Christopher Lee plays the only Kaldorian with any lines is a sort of red herring. You keep expecting something sinister because you've got Dracula in a role where 1) he is found resting in a casket, 2) one of his brethren turns to ashes, 3) Dr. Russell seems entirely fascinated by him, and 4) she allows herself to undergo suspended animation in one of these caskets, doing a twisted hand thing when she wakes up after tense minutes of our not knowing if she even can. A lot of arrows point to some kind of vampiric influence, but we've been set up to mistrust Lee's character this way. Unfortunately, the flat tones he gives Zantor don't amount to much of a performance. He really needs the unctuousness of a cult leader - which he naturally has, so what the hell happened? - for Russell to be this mesmerized by him.

In reality though, the enemy is an insider - Simmonds - who puts himself above the community and commits acts of sabotage to force Koenig to let him go to Earth in the Kaldorians' single free casket. Ironically, the computer chose him to go, but he never waited for the results. The fact everyone thinks he's got his gun on kill in these scenes shows just what a low opinion they have of him, but even if it IS on stun, he nevertheless puts everyone's lives in danger to get home himself. Home 75 years in the future. I don't know how fast the Moon is going, but it must be faster than the Kaldorian ship. Moonbase Alpha was flung into space some weeks ago, but it'll take the Kaldorians seven and a half decades to get there! Of course, Simmonds never will. There's a reason behind Zantor's talk of Russell's "spirit". She perhaps has the meditative qualities for the suspension process to work on her, but Simmonds wakes up in his glass box too early and freaks out, doomed to die on that ship long before it arrives at its destination, a harrowing scene. And is there a character most opposite in temperament to Dr. Russell than Commissioner Simmonds? He's a loud, raving egotist, where she's a quiet, repressed caretaker. And he pays the ultimate price for being the worst of humanity.

Just a couple of design notes, post-pilot: The big-ass zippers on the uniforms are gone. Everyone looks much sleeker and more comfortable. The Eagles are more colorful now, but that'll fluctuate. We're actually seeing orange-striped pods that can be left behind on missions (was that a good idea in this case, just leaving the command staff alone at an alien ship's airlock?). The Main Mission set is different here, but that'll change several times over the course of the series, up and down given I'm not following the strict production order. I'm also glad the terrible Moon model isn't used, the production opting for stills of the actual Moon when it is required, but I'm expecting it to return.

HEY, ISN'T THAT...  You don't need me to tell you who Christopher Lee is, but in case you do: He had been Dracula and a Bond villain by this point, and would later become Saruman the White and a Sith Lord in other, more popular, genre franchises.

REWATCHABILITY: Medium - If Christopher Lee had given a more magnetic performance, we'd be looking at a Medium-High here, but the Kaldorians are pretty dull, taking away from a strong ironic script with a pitiless ending.
Space 1999

MichaelT said…
Your choice of Space:1999 is serendipitous as I just finished flipping Series 1. There is some truth that all of Anderson's live action shows make the actors look like they are on strings. But the handpicked crew of Moonbase would not be expected to get emotional. They were the best and brightest Earth had to offer (and I do mean Earth -- keep an eye out for the diversity of the cast, both ethnically and geographically). Some points of interest:
*Space:1999 can be considered as a sequel to Anderson series UFO, just 20 years further along. Although I saw 1999 in English, UFO was only available in Montreal en Francais.
*Watch for bits and pieces of the space station and re-purposed Discovery models from 2001 in upcoming episodes.
*I actually attended school with Commander Koenig! He graduated from MIT in 1981 - my year, apparently “the youngest in his class at MIT." I was third youngest so it's not me. In the Andersonverse he must have attended under the alias of “Eric Sklar,” who graduated at 19.
Any chance you'll do other Anderson shows like UFO, The Protectors, or even Thunderbirds?

No, no immediate plans to do those other series, but you never can tell what'll happen in the future. I've got 2015 decided, but nothing beyond that.

Anonymous said…
I know it's not much of a candidate for review, but "Danger 5" is worth catching; it has a Gerry Anderson feel to it, and season 2 is starting today. Part one of the pilot episode:

Siskoid said…
Give it time. I never thought the blog would reach its 8th year anniversary.
January 4, 2015 at 9:52 AM

Jeremy Patrick said…
Regarding your reference to it being silly to put the entire command crew at risk, all they're doing is following in the footsteps of *every single episode* of Star Trek.

The stupidity of it is actually why I've heard that people have trouble running effective Star Trek RPGs. Players are too rational to risk their officer characters and instead routinely order NPC underlings to take all the risks of Away missions, thus making the game not particularly fun . . .
January 4, 2015 at 9:56 AM

Siskoid said…
This very thing killed my ST TNG (Last Unicorn) campaign. The Vulcan captain simply refused to go on Away Teams and I had done too good a job creating underlings in each player's department (basing them on people we all knew from our improv background).
January 4, 2015 at 10:15 AM