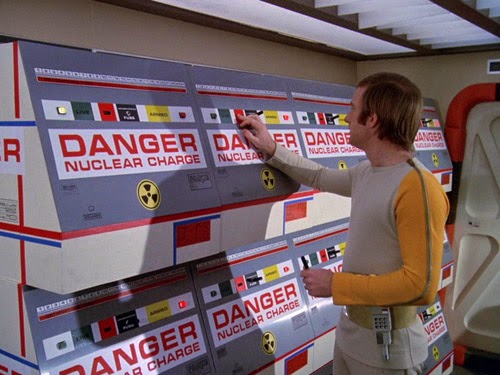 REVIEW: A title like "Space Brain" immediately evokes "Spock's Brain", so dialog like "You must not touch my brain!" doesn't come as any kind of surprise. The episode is one scientists should probably steer clear of, while 60s Doctor Who fans will light up at the use of a foam machine to fill the sets - and no, that idea doesn't work any better a decade later, no matter how many driving chords you put behind it. That said, it's one of the grooviest episodes of the series. The Space Brain itself, the trippy psychoanalysis, all of that makes for unusual effects that are still the best reason to rewatch this one.

While there are some interesting elements, they're not really paid off. For example, the idea that the Space Brain is trying to save the Moon from its own crushing power might have worked better if its plans hadn't been disrupted by some random malfunction. In the end, Victor's Plan B could have been put into effect even if the Brain hadn't made contact, which means it's all a bit pointless. The teaser, with various people on Alpha doing puzzles and trying to beat each other's records, wants to be thematic, but the ensuing plot isn't strictly about solving a puzzle, so it becomes texture and not much more. That's fine, though the message one could glean from it is that life on Alpha is boring as hell. The character of Kelly, who gets hypnotized by the Brain, could have been anyone, except for the fact he dies smothered in foam. He's not treated as expendable, and many people put their lives in danger to save him, so there is that. Giving him a wife, but then not doing anything with her, comes across as padding and/or just some of that Italian casting Space 1999 was forced to do.

Ultimately, the episode is pretty brain dead. I'd almost believe the Brain's plans to use physics to divert the Moon's trajectory, but Victor's plan to increase air pressure inside the base is pure nonsense. For that matter, Kelly and then Alan going out for spacewalks is just about the most dangerous move they could make, and not well justified. The way an Eagle is crushed doesn't really correspond with what happens to Alpha later. Koenig pulling fuses out of nuclear charges achieves a certain retro kitsch. And a guy possessed and working on the computer at superspeed? They've already done this exact shtick in Ring Around the Moon. The memory we're left with is foam spreading over the Moonbase model, and not much else.

HEY, ISN'T THAT... Shane Rimmer is Kelly; he's often played the voice of whatever Eagle pilot is signing in, so in a sense, he's almost a recurring character. In his long career, he's played a lot of bit parts in genre films, in franchises like Star Wars, Superman and James Bond. He also holds the dubious honor of guest-starring in Doctor Who's The Gunslingers.

REWATCHABILITY: Medium-Low - Ironically watchable, it's the kind of episode you can laugh at with friends.
Space 1999