January 06, 2015
The Alphans encounter the Voyager space probe that has been wandering the cosmos propelled by the Queller drive - a deadly engine system. Following the probe is a fleet of alien ships from a world devastated by it. 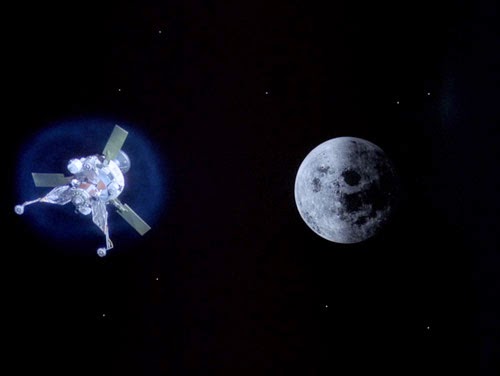 WHEN: The episode takes place in (early) 2000, 15 years after 1985. It first aired on Oct.9 1975, 6th in broadcast order, but was 5th in production order. Its early placement makes sense because the Alphans later show a lot of knowledge about planets in this remote part of the universe. The real Voyager 1 was launched on Sept.5 1977. As it turns out, Voyager 2 was launched 16 days EARLIER. Neither became dangerous. The Voyager probe that DID become dangerous and returned to Earth as V'ger in the 2270s was Voyager 6, apparently launched in 1999 and later lost in a black hole. Coincidence?!

OH THE NOSTALGIA! I must've watched this in French as "Le retour du Voyageur", but I don't actually remember it.

REVIEW: The existence of this powerful probe explains a number of things - that humanity has interstellar flight capability (Meta starts to make sense), possibly why the Alphans are unsurprised to find alien life, and certainly where they get their data about this galaxy in later episodes - but as an "ambassador" program (like the real Voyager probes), it's pretty terrible. Unless humanity really wants to be known for pollution and genocide. (Truth in advertizing, I guess...) That any space program would green-light such a dangerous item is improbable at best, but it's not the biggest piece of nonsense the episode asks us to swallow. The sheer number of coincidences required to make this story work is staggering. Not only is the Moon on the same trajectory as the probe, but its inventor is one of 310 Alphans (under an assumed name). And two OTHER Alphans have an axe to grind with him on account of their losing family members when his Voyager 2 misfired and killed 200 people. The odds would seem, as they say, astronomical.

But buy the premise, buy the bit. Let's say we do. The human drama Voyager causes is pretty strong. It's not a NOMAD or V'ger thing where people have to argue with an unfeeling computer (well, it is, but we'll get to that), but rather about mixed feelings, difficult decisions, and overwhelming guilt. Ersnt Linden, né Queller, only wanted to help humanity, but his mistake cost lives (even more lived than he even knew, in fact). Now, Alpha is forced to risk a deadly danger in order to get all the data Voyager has collected, data that could mean life or death in the future, the loss of which would mean all those lives truly were lost in vain. The conflict on the Moonbase springs from Alphans who have a personal grudge, but need to accept Queller's help for the greater good. None is more confused than young Jim, who saw Linden as a mentor, but who made him an orphan. Jim both lashes out and offers forgiveness, in time. Obviously, Queller must sacrifice himself at the end, no surprise there.

That sacrifice comes at the hands of aliens who need justice for their worlds devastated by Voyager 1. But who will give ME justice for enduring the lead alien's dreadfully robotic delivery? Do these guys kill with weaponized boredom? Sheesh. Worse, they aren't characters at all, just motive. They want justice, they will get it by killing everyone on Alpha. They won't hear reason. When Queller wants to give himself up to save the crew, they refuse. Nothing changes their minds. And... they... will.. tell... you... so... very... very... slowly... and... without... affect. Gah! This is director Bob Kellett's only real failure. In a story that's essentially about people looking at screens (something else it shares with Star Trek The Motion Picture, which it predates), he manages to find interesting angles, shoot through objects, etc. to keep the frame interesting. If only he'd managed to apply that to the characters.

HEY, ISN'T THAT... Jeremy Kemp is Ernst Queller; having appeared in such TV fare as Colditz and The Winds of War, geeks like us will nevertheless remember him as Jean-Luc Picard's hard-nosed brother Robert. Johnny Byrne wrote the script; he was script editor on Season 1 of this show, but is also remembered as a Doctor Who writer (The Keeper of Traken, Arc of Infinity, Warriors from the Deep).

REWATCHABILITY: Almost Medium - The drama works, but awful aliens and too much coincidence distracts from the episode's qualities.
Space 1999