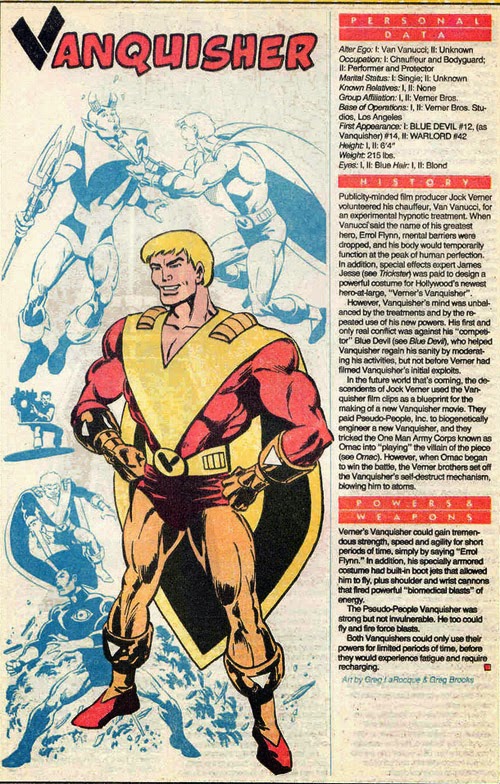 The facts: Dan Mishkin and Gary Cohn created the Vanquisher and then created him again. The first time was in the OMAC back-up in Warlord (there was an OMAC back-up in Warlord?!). The Greg Larocque design first appeared in #42 (1981), and the story continued into the next issue. The second time, though in DC's chronology it would seem like it was the first time, Verner's chauffeur who had been appearing since Blue Devil #12 (1985) was turned into a very similar Vanquisher in issue 14, and never again after #16.
How you could have heard of him: Uhm, you're a Blue Devil fan from way back?
Example story: Wanting to get at the root of the character, I'll be examining those OMAC back-ups in Warlord #42-43 (1981) by Dan Mishkin, Gary Cohn, Greg Larocque and Vince Colletta 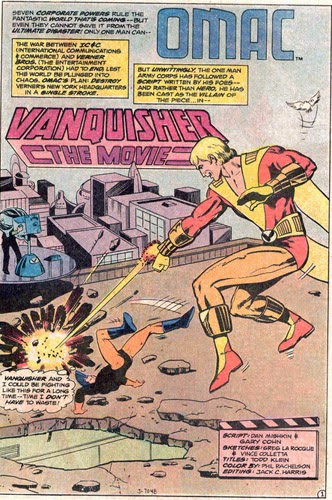 So I hope you weren't expecting some glorious Kirby-style stuff. We're in fact pretty far from it and "the future world that's coming" is full of blocky skyscrapers that could have been built in the '50s. But this is very early Greg LaRocque art, nowhere near the height of his powers, and it's pretty early for the writers too, or else Mishkin's name wouldn't have been misspelled Mishkan in #42's credits, yeah? So to catch you up, OMAC is trying to stop a war between International Communications & Commerce and Verner Bros. So IC&C is undoubtedly Marvel Entertainment in this scenario, and it's all coming true. OMAC, a One Man Army of taste, sides with IC&C, allying with its CEO Wiley Quixote (I kid you not). Now, Verner's was a major element of Mishkin & Cohn's Blue Devil, so I'm pretty surprised it has its origins in this story, right down to the same logo. So when Vanquisher shows up, an artificial "pseudo-person" (meaning OMAC didn't solve that problem entirely in his own series), I guess he's retroactively modeled on Van Vanucci. True to form, we have an Entertainment company resurrecting an old franchise and no matter how far in the future we are, they've managed to hold on to the rights. Battle ensues, of course, and lots of gay subtext, if you ask me. But it's don't ask, don't tell in this One Man's Army. Taking the fight to the roof, the battleground becomes a movie set, and OMAC is cast as the villain! So that's how you make propaganda films in the future. You'd think the CG would be up to it. I guess Verner's likes practical effects, even if they do threaten to bring their fancy building down on their ears. So they command Vanquisher to stop firing from above, which of course means he sacrifices his only advantage - AND goes way off script. 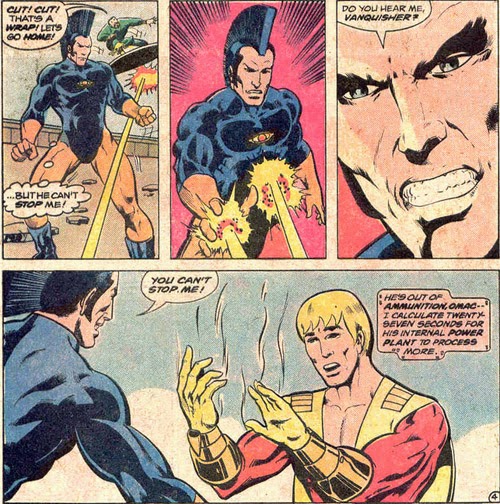 He can't hear you, OMAC, because that was a THOUGHT, not SPEECH. I'm starting to think editor Jack C. Harris didn't care about this feature. I mean, he had Mike Grell on Warlord, who cares what goes in the back, right? But back to the fight. Can Vanquisher extricate himself from closed quarters punching? 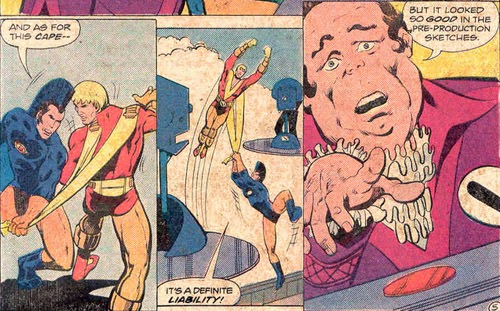 Not really. And that, folks, is why no one wears a cape in the army. It's been swell, but even mediocre things must come to an end, so the Verner Brothers make their Vanquisher self-destruct. Boom. The end. Well ok, OMAC does go over there and whup some brotherly ass, but as far as we're concerned here, it's over. Those interested in far better material are advised to check out the Blue Devil series. Still, the Vanquisher isn't a bad design, so why did we never see him again, at least in the present day? Is the name that cheesy?

Who's Next? From a character from the future, to one from the past. But how far into the past?
Comics Who's This?

snell said…
In fairness, Wiley Quixote is the type of name Jack Kirby would have come up with but no one would make fun of because he's Kirby and you're not allowed to mock the genius.
January 28, 2015 at 9:35 AM

Anonymous said…
Hah, I had this comic, actually I had the whole "Warlord" run for which there were a variety of backups (OMAC, Arion, Barren Earth, Claw the Unconquered).

It was Jim Starlin who started the OMAC run, with this new status quo: the entire GPA had been murdered, and OMAC decided the only remaining route to world peace would be to side with the most powerful corporation and defeat the competition as efficiently as possible. So it was Starlin who gave us the deaths of the GPA, Wiley Quixote (yes that's on Starlin), and a healthy dose of psychohistory from "Foundation".

Siskoid said…
Oh I think we've all mocked a little Captain Victory on the slide, Snell ;-).

Anon: I remember buying Warlord FOR Barren Earth. That said, if Jim Starlin was involved, then I forgive nothing. Not a fan of his DC work, which always seemed to me to be about aggressively going against what the characters he as using were about.
January 28, 2015 at 9:47 AM

Anonymous said…
Oh, I didn't mean to forgive because of Starlin, so much as to exonerate Mishkin and Cohn.

In and of itself, I don't think it was a bad idea to set up a new status quo for OMAC; it still kept the original mission (peace) without having to be a Kirby retread. But overall I'm not thrilled with Starlin's DC work either; he strikes me as one of those writers who has many good big ideas but also desperately needs an editor to keep him in line. Left to his own devices, he breaks things.

Bones about which I have to pick with Starlin:

1) Having John Stewart fail to save Xanshi. That was Starlin's doing. Twenty-five years later and it's still John's defining action.

2) Pushing the notion that it was John Stewart's arrogance that led to the destruction of Xanshi, and not the fact that he arrived with very little time to spare and the bomb had defenses tailored to John's weakness. (You can't tell me the bomb wouldn't have also had fire / telepathic defenses against J'onn.)

3) Cloning Mongul from Thanos over at Marvel (who was in turn a clone of Darkseid).

5) Didn't Starlin kill off the New Gods the other year, when Grant Morrison needed them alive for his stories? Jesus, dude.

Wow, someone else who remembers "This Barren Earth". I can't say I liked the story at the beginning -- it seemed to be a retread of things we'd seen before ("it's called an energy blade, scum" ... good God, rip off "Star Wars" much?) -- but what it built into, with the humans and lizards learning to cooperate for survival and prosperity, was very much worth reading.
January 28, 2015 at 4:00 PM

American Hawkman said…
Give Starlin credit... his original intent was for Guy Gardner to fail to save Xanshi, thus knocking his sense back into him. The rest is entirely his fault. (Well, not the New Gods bit, since DC editorial came up with that insanity to save Countdown, which, as we all know, was an abomination in the eyes of God.)
January 28, 2015 at 4:50 PM

American Hawkman said…
And I would have tarred and feathered him if he'd managed to successfully screw up Hawkman again, as his one-shot planned before Geoff Johns noticed and killed it dead.
January 28, 2015 at 4:51 PM

Anonymous said…
I hadn't heard that about Guy Gardner before. Did a little looking into it, and while it would have made more sense for Guy to fail to save Xanshi, it looks like the plan was to use John all along:

The funny thing is that Starlin and Mignola seem to have had no awareness whatsoever that it would be a pivotal point in John's history. It's a bit like Jean Grey destroying that one civilized world because John Byrne thought it would look cool, but then editorial stepping in and saying, "uh, you do realize there need to be in-comic repercussions for that, right?"

Siskoid said…
Anon: For AmHawk and I discussing how to save Hawkman, check out Arrowed: Hawkworld not too far down on this here blog.
January 28, 2015 at 10:38 PM

American Hawkman said…
Hawkman is one of those characters that can work in any story, if properly written. He's equal parts scientific and mystic, blatant and subtle, cosmic and earthbound... I genuinely can't think of any other character that does do many things that well.
January 29, 2015 at 9:53 PM

Anonymous said…
Well, there's always the Vansquisher (the titular character of this article). If you have any kind of van, he can squish it. A VW Westfalia? Squished. Van Morrison or Van Halen? Squished. Van De Kamp's fish fillets? Squished. Alien scientist, ancient sorcerer? So long as "Van" is in their name, squished.
January 31, 2015 at 9:13 AM

Anonymous said…
Rumor has it he was mistakenly picked to face OMAC because of a clerical error ("One Van Army Corps"). SPELLING COUNTS, PEOPLE.
February 1, 2015 at 12:25 PM