February 13, 2015
How about a foursome of recent new series and mini-series I MIGHT recommend (you'll just have to see)? You know how this works by now. 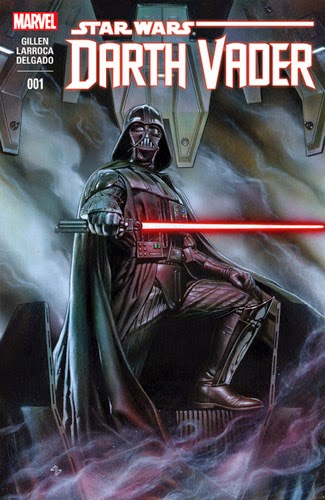 Darth Vader by Keiron Gillen and Salvador Larroca for Marvel. I'm a big fan of Gillen, especially of his ability to make villains fun and interesting protagonists. And we're off to a good start, with a Star Wars scroll written from the point of view of the righteous Empire, as opposed to the terrorist alliance. Unfortunately, Larroca's photo-real style and "movie screen" horizontal layouts fail to make Vader's badass action in any way dynamic. I'd even say it often lacks clarity. It has no movement. It's pretty, I'll give it that, and Larroca certainly has his fans, but it lacks energy for me, like a collection of crisp stills. Still, Gillen brings some interesting elements to the table. As with the main Star Wars series, the action takes place between A New Hope and The Empire Strikes Back, and Lord Vader is on the trail of the pilot who blew up the Death Star. The Emperor is on his back, Jabba the Hutt and Boba Fett make appearances, and the latter becomes a mirror of Han Solo with the addition of a proper sidekick for the fan-favorite mercenary. As an ongoing series, Darth Vader promises to in fact shadow the main series' action (I made a funny there). Will they cross over into one another, or is this Marvel's way to keep the Light and Dark sides apart so Empire's continuity isn't affected?
Recommended? The best is yet to come, I'm sure of it, I just wish the art didn't look so much like photo referencing. 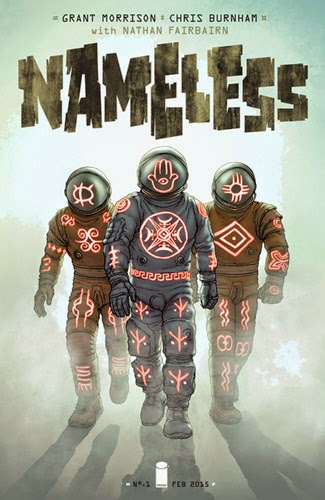 Nameless by Grant Morrison and Chris Burnam for Image. How do I even begin to describe this series by the infamous Batman Inc. team? It's like the Invisibles didn't care to hide the truth from the world anymore. The protagonist is Morrison's version of John Constantine, wicked and funny, in a world where monsters and magic are real, but so are science fiction concepts. So when an extinction-level event threatens to wipe out humanity, you can bet it's from an asteroid from space that just so happens to have a mythic connection with to the Mayan Empire. Not that the Earth seems to need an apocalypse to get the job done! It's a disjointed trip, and I won't presume to understand what the heck is going on. Well-read though I may be, I'll never catch up with Morrison's crazy library. So while you're not sure what you're reading, please do enjoy this Chris Burnam art, which is detailed, precise and spectacular. I've read an interview where he says the artwork and layouts are actually the key to understanding (or at least spotting) some of the themes they're going for. Looking at it, I'm sure it's true. I think it's going to take me a while - and probably a complete series - to get my head around all that though.
Recommended? If you liked Morrison's Invisibles or The Filth, you'll find your due in Nameless. If they made your head hurt in a way you don't want it to hurt, Nameless will confuse more than delight. 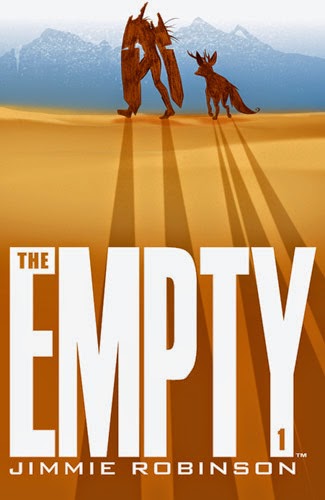 The Empty by Jimmie Robinson for Image. The Empty is a fantasy world that includes at least two very different lands, inhabited by very different people (even physically). One is poisoned by evil roots, turning it into a desert where mutated creatures live. The other is lush, green and in the middle of something of a Renaissance. Two women, one from each world, Tanoor and Lila, meet, strike a friendship, and are off to rid the first land of its poison curse. That's the gist of it. Robinson brings some strong design elements to his world, unconventionally using free-floating dialog as opposed to art-blocking speech bubbles, and refusing to put black lines around panels, giving his layouts a certain luminosity. It may take a while to accept the distorted anatomies of the characters, though they aren't a weakness of the art, but part of each "race". At the heart of the story are some intriguing mysteries. Why did Lila's people try to kill her? Where did her regenerative powers and ability to speak Tanoor's language come from? And what is the true root of the land's poison? As a fantasy series, it doesn't borrow from the usual sources, for which I easily forgive some of its clichés, most notably the superstitious priest who acts as antagonist.
Recommended? Certainly intriguing, and the art is keen. I want to see where this goes. 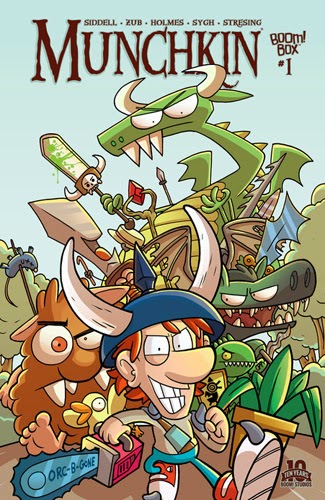 Munchkin by Tom Siddell, Mike Holmes, Jim Zub, Rian Sygh and John Kovalic for Boom! Box. Containing several short stories that poke fun at Dungeons & Dragons, just like the card game it's based on, Munchkin manages a lot of smiles and even some laughs. If you've ever played D&D, or delved a dungeon in some other system, of even sought loot in a video game like Skyrim or World of Warcraft, you'll get it. Or most of it. And the art is fun regardless of which artist is taking point. I was afraid the lack of a continuing story would make this a one-shot, but a second issue has been solicited, so huzzah!
Recommended? Tabletop gamers/role-players should definitely give it a shot. It's the best humor book on the subject since those awesome The Guild comics from Dark Horse.

And there you have it. Anything you care to try in there? Anything I haven't but should?
Comics Gaming Grant Morrison Number Ones That Franchise I Never Talk About

Tim Knight said…
How does Munchkin stack up against Knights Of The Dinner Table?
February 13, 2015 at 6:55 AM

Siskoid said…
I've never read Knights, but Munchkin is probably a lot thinner at this point.
February 13, 2015 at 8:31 AM