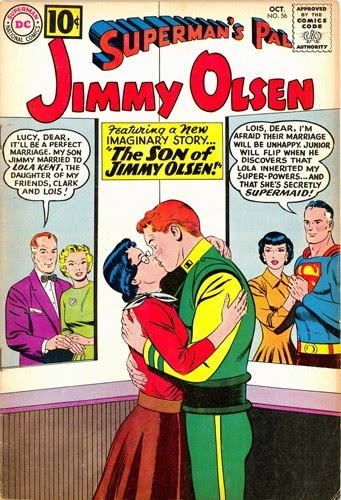 Happy Valentine's Whatever! In a future rocket age where it's still 1961 in spirit, when Clark Kent and Lois Lane have married and raised a daughter called Lola, when Jimmy Olsen has become editor-in-chief of the Daily Planet and married Lucy Lane... the latter two had a son, called Jimmy Jr., who became an impulsive rocket pilot. As you might expect, Jim the Elder, with all his accomplishments, is still pretty fixated on matching his son to his best friend's daughter (i.e. Junior's COUSIN).

The Kents have always been great a playing nerds despite being god-like superhuman beings who could subjugate the human race and force us to hold parades for them every other week. Lola is secretly Supermaid, which Jimmy Jr. has a crush on, as strong as his disinterest in Lola is. 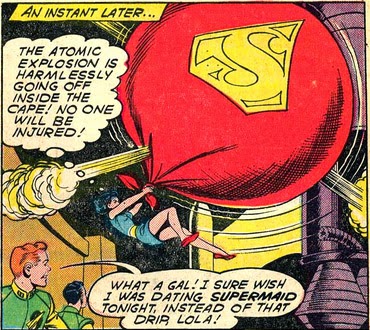 Can Cupid stop history from repeating? Not if Superman has anything to say about it. He's still stuck in his crappy Clark Kent identity because he's afraid of what might happen to Lois if his enemies found out who he really was. He certainly doesn't want his daughter to have to deal with the same problems, and dagnabbit, she's not allowed to date a human boy! Well, Lola's sparkling personality has a little something to say about that: 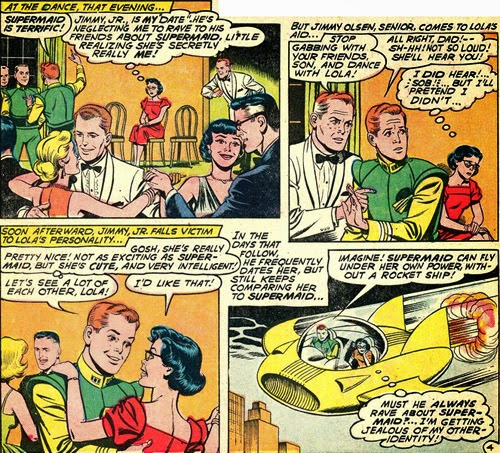 Yes, it's possible for a hot rocketship pilot to fall for a girl with glasses. Now if can only stop talking about Supermaid. Several nights later, he finally does. Stand by for your ROMANCE COMICS PANEL(TM). 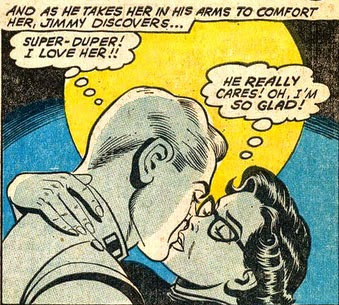 However, Jimmy Jr. fails to get Clark's consent. Like I said, it's still 1961 in everything but the technology. Lola accepts her father's decision and logic, but Jimmy Jr. doesn't, and events force her to tell him her secret - that the two girls he's loved are one and the same. Jimmy Jr. throws himself into his studies, taking a course in super-science at an interplanetary college (remember those from the late 80s?) and finds a special herb on an asteroid (SUPERRRRRR-Science!!!), and next thing we know, he's eloped with Lola. Superman is mighty pissed, but hey, it's not a problem... 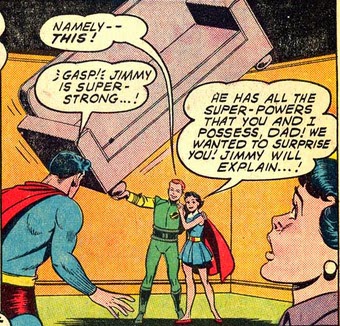 Jimmy Jr. has given himself super-powers with a serum derived from his herbal discovery. That was his plan all along. SUPERRRRRR-Science!!! Also: Love conquers all!!! Lois also takes the serum, and now Superman is free to arrange a press conference to publicly shirk off all their secret identities. That night, the world responds. 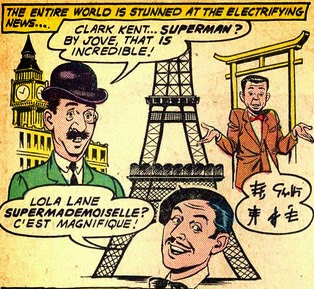 Zut alors! Lex Luthor also responds, with a wedding gift that permanently gasses the powers right out of Junior and Lois. Ooops!

larry said…
Lois's daughter and Lucy's son? How about Lola isn't allowed to date or marry her cousin? That should fix the immediate problem without super-dickery.
February 14, 2015 at 11:31 AM

But then, if not for Kryptonian laws against marrying one's own cousin, Superman would have married Supergirl long ago. I'm not kidding; he's on record saying this!
February 14, 2015 at 11:37 AM

Green Luthor said…
The worst part is, not only are Jimmy Jr. and Lola cousins, the story actually acknowledges that fact! (It then tries to dismiss it by saying "it's legal in whatever state they're in". Ewwwww...)
February 14, 2015 at 2:42 PM

Anonymous said…
obviously the lanes ADOPTED lucy and or lois they unlike my mom and aunts look nothing alike
February 25, 2015 at 1:27 PM

Kuudere-Kun said…
I think the Cousin Taboo is the most irrational of all modern Taboos. And it is mostly purely modern.

The risk of issues caused by Genetic similarity is 2% between any two people, between first Cousins it increases to only 4%.
April 12, 2015 at 9:15 AM