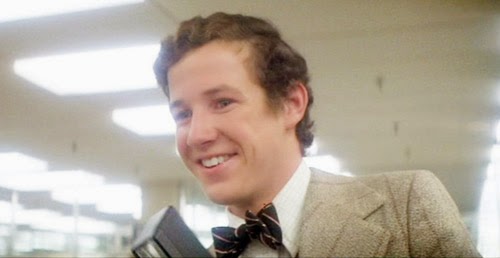 That's right, read that again if your eye skipped over it, he also played Jimmy in the Supergirl movie, which makes Marc McClure the only actor to appear in all five films of the "Donner era". I don't think his Jimmy really ever got to do much, certainly not as much as his comic book or television counterparts, but had the casting for it (give or take the lanky physique) and an impressively large bow tie. His best Jimmy moment is probably in Superman III where he faces deadly peril to get a couple of pictures of a flaming refinery and has to cry for Super-help. Not the best film, but at least Jimmy is foolishly fearless in it.

Or perhaps it's his shilling of Super-Powers action figures from Kenner? Yeah, that's probably his biggest and best moment. What. I love the Super-Powers line.


He would later appear as Marty McFly's brother Dave in the Back to the Future movies, and as often happens with nostalgic Super-casting, McClure also appeared in Superman Returns (a cameo as a taxi driver) and in Smallville, as Dax-Ur, a Kryptonian scientist who has been living on Earth for over 100 years, loosely based on the Phantom Zone villain Jax-Ur. But we don't talk about that.

LiamKav said…
You show admirable restraint for not posting "This is Marc McClure. You may remember him from such films as Superman IV: The Quest for Peace and Supergirl."
February 28, 2015 at 2:03 PM

Siskoid said…
Why WOULD you remember him from those films? I only remember IV being about Lennie Luthor, and I don't remember Supergirl at all.
February 28, 2015 at 7:41 PM

Toby'c said…
Liam - actually, Gladys the Groovy Mule appeared in an issue of Simpsons Comics (with Bart and Millhouse riffing on it) so I remember him from that pretty well now. The first scene is a close reference to Amazing Fantasy #15, I've since discovered.
March 3, 2015 at 1:03 AM