February 04, 2015
Alpha comes across a funny robot who takes Koenig and Helena hostage. 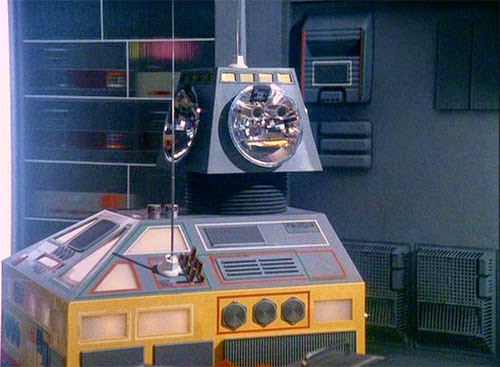 OH THE NOSTALGIA! In French, as I would originally have watched it, Brian was called "Marcel".

REVIEW: While I don't think Brian the Brain is as irredeemably bad as people say, it's still a great big mess. It doesn't fit into Earth history as it's been presented to date, and features the comedy hijinks of a computer with a hubcap for a face. But I can't bring myself to hate it. Brian looks silly, but he's not dumb. When he whistles at random machinery, he knows he's making a joke. It's not about R2-D2 humping a trash can or anything. He's willfully disarming. Perhaps something of Bernard Cribbins' comedy talent shines through - I wonder how much improvisation he was allowed - but Brian is amusing, if not funny, at least in comparison to Landau and Bain whose light-hearted moments always seem so forced. I also find it amusing that the episode starts like it's going to be a clip show. Perhaps it hopes to coast on the sense of relief when Koenig and Helena's memories are preempted for an actual emergency.

Plotwise, it's got some problems. We're who knows where, and an old Earth mission pops up. It left Earth only three years before the Moon broke away, but these guys have enough know-how to create an A.I. with emotions and a conscience in their spare time, technology that seems unknown to Alpha. Brian's emotions have made him go mad, of course, and he eventually needs to be Kirked, though thankfully, he doesn't blow up when he's confused. It's not all clichés. The "love test" he applies to Koenig and Helena is kind of interesting, though it's predicated on his ship having two side-by-side airlocks which don't match anything on the exterior. Blatant contrivance, and I'm really not sure the two of them need to be in love for his plot to work. But he's mad, so everything can be justified, right? He eventually gets the fuel to last a billion years (I'm not kidding) and becomes irritatingly manic, which is about the time you've probably had enough of this episode even if you were mildly enjoying it.

The smoggy atmosphere of Planet D is well realized. Tony and Maya are clever in the way they beat Brian to the surface and give clandestine help to the two hostages. They manage to draw some pathos from Brian at the end... It really isn't as bad as all that.

HEY, ISN'T THAT... Bernard Cribbins is Captain Michael and the voice of Brian; a waste of a great talent today best known and celebrated as Doctor Who's Wilfred Mott.

REWATCHABILITY: Medium-Low - It's not well made, but it's not the worst of the worst and does feature a couple of amusing kitsch moments.
Space 1999

Anonymous said…
Can I toss this out? At the end, Tony recommends they reprogram Brian with the Ten Commandments to make him a better robot. Going through the list, that means Brian would be obligated to:

Which are fine, I guess, but then we get to these:

Jeremy Patrick said…
"In French, as I would originally have watched it, Brian was called "Marcel""

Siskoid said…
I don't mind it, frankly. I might even prefer it. There is something very clunky about everyone speaking French yet having English names mangled by the French accent. The epitome of this is Star Trek the Next Generation which, if I remember correctly, pronounced Picard with a voiced "d", even though it's a French name with a silent "d".

A great use of changed names is the Flinstones, which is called Les Pierre-à-Feu in French and had great celebrity voices out of Quebec, and names changed not just to make sure they were still rock puns, but to fit the language. Barney Rubble was Arthur Laroche, and Wilma was Delima, and so on.
February 4, 2015 at 8:05 PM

Brian Artillery said…
It is a fun episode, but I was struck by one thing: Doesn't the always entertaining, and frankly brilliant Bernard Cribbins, do evil so creepily well here? Yes, you have the funny looking robot, who is utterly serious about getting it's own way, and the voice acting by Cribbins goes from funny to downright menace, and is even more chilling as it is done so well by an actor whom everyone knows to be a nice bloke whose acting you believe - see Doctor Who 'The End Of Time' if you don't believe me. 'Brian The Brain', then. Not one of Space: 1999's great episodes, but certainly not it's worst, and definitely worth watching for Bernard Cribbins' superbly creepy voice acting, which is sheer class.
November 15, 2015 at 3:31 AM