February 05, 2015
A heat storm, a man with prophetic visions, and his wife who will die if she doesn't have an artificial heart implanted. 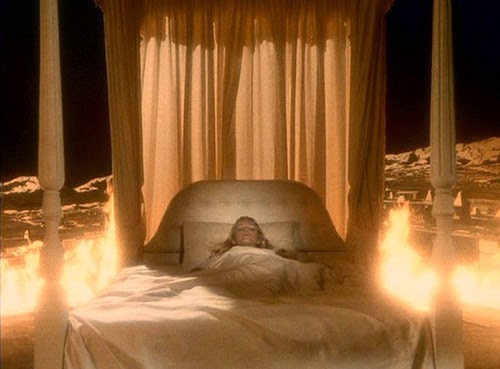 WHEN: The episode takes place 1196 days after Breakaway on Dec.22 2002. They should put up Christmas decorations, maybe the natives wouldn't get so restless. It first aired on Nov.25 1976.

REVIEW: It starts off well enough, with an engineer trying to find a rare metal under the Moon's surface as it's needed for his wife's artificial heart, but quickly devolves into a pointless runaround in underground tunnels. While Osgood's visions are nice and visual, the story really hinges on a satisfactory explanation or resolution to these sudden powers. Instead, Helena and Tony are rather glib about it in a coda that's more about his new batch of homemade beer (a subplot they should really put to rest now). Writer Anthony Terpiloff wrote another episode where someone shrilly asks everyone to have faith - Collision Course - but at least that one was about Koenig, a character we know and want to follow. Catacombs of the Moon needs us to care about Osgood and Michelle as if they were recurring characters - Tony is even strapped with a shared back story - but one goes mad and acts like a suicide bomber, and the other is in bed practically the whole time. Who cares?

What we should take on faith is that the literal heat wave encountered by the Moon is a sentient being beaming images into Osgood's head. If so, what did it want? Why did it help? Is it like the Space Brain, unable to stop itself from almost blowing up the base, and feeling guilty, finding a way to manipulate an Alphan into dangerous, but ultimately beneficial behavior? If so, it's very bad at it, as Osgood is only really concerned with saving his and his wife's lives, and going into the catacombs (I swear, they don't know what that word means, and I winced every time they used it) is scarcely a solution to the base blowing up from the heat. It somehow leaves the rare metal they need, again, how and why are not known. Maybe it just wants to see the Alphans get down to their bathing attire. This thing is just a huge McGuffin that shows up, does things, then leaves; an obstacle to the real plot, which is just about a husband going nuts while the doctors fail at making a heart for her.

The climax is a completely unnecessary chase into the tunnels, and a dreadfully boring one at that. Truth is, Osgood didn't need to go down there to survive the heat wave; it went away on its own and everyone's fine. And he didn't need to keep his wife out of medlab, because they get her back there as soon as possible and the new heart works. Well it doesn't, and then it does when she sees her husband. Love conquers all, or something. Such a mess.

HEY, ISN'T THAT... James Laurenson is Osgood; he was Detective Inspector Bonaparte in Boney, and starred more recently in such things as State of Play and MI-5. Pamela Stephenson is Michelle; she was Lorelei in Superman III, and is a Saturday Night Live alumni (84-85 season).

REWATCHABILITY: Low - Whatever the episode's intentions are, they're never made clear. A nonsense threat, characters acting crazy, and no real justification for any of it. And boring too.
Space 1999