February 06, 2015
Explosions threaten the Moon; to stop them, Koenig must convince some balls to let him talk to their cocooned masters. 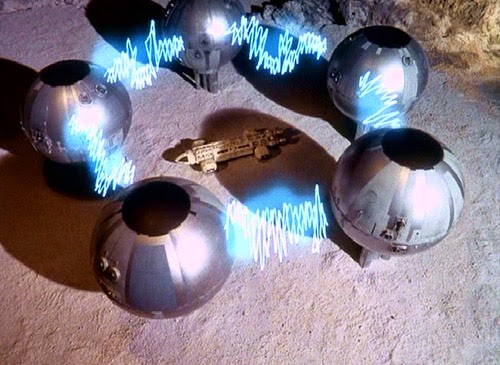 REVIEW: The Moon is AGAIN under threat from energy waves, or more accurately (though not scientifically accurate) shockwaves from explosions in space. It's too bad it's nonsense, because some elements are well done, like Alpha finally adopting some kind of protocol for when the base is rocked by explosions, and the accumulation of dust on the models after the lunar surface has been blown around. The source of the danger is a planet with a ring of moons that project an energy screen to protect its molten caramel middle, necessary because the inhabitants seem to spend an inordinate amount of time regenerating inside cocoons, trying to achieve perfection.

While they sleep, these guys are protected by bouncing balls who can guess from which planet you are from a partial sketch and provide you with the right atmosphere. Again with the bad science, but while the idea is interesting and certainly shows technology well ahead of our own, it leads to way too many scenes of balls bouncing through rooms and corridors in slow motion. Lest you think only the science is dumb in Tony Barwick's script, there's also an unwarranted scene where Alan attacks an alien's casket and kills him, not because it makes sense for him to panic at that point, but rather because the plot needs the awakening aliens to be unsympathetic to the Alphans' plight. The moment's only redeeming feature is that Maya has trouble remembering a form that can breathe the aliens' chlorine atmosphere, showing there are limits to her powers (except there aren't).

When the aliens come out to play, they're beautiful naked girls (and one dude, eventually, you're forgiven for forgetting about him), and they're all about hyper-democracy. Each of only three people vote on whether or not to spare the Moon. One chick wants to, but also wants to learn how to breathe oxygen and mate with Koenig. The other absolutely does not, leaving the tie-breaker to the dude whose brother Alan killed. Ah, there's the convenient rub. Koenig's play is actually fairly satisfying. He uses the fact these beings are pursuing perfection to make the case that positive ideas are better, and thus "more perfect" than negative ones. Ultimately creation is better than destruction. That works. The episode might have been more interesting if that debate had raged for a longer portion of it instead of wasting our time with obstinate balls, but what are you gonna do?

HEY, ISN'T THAT... Sarah Douglas is "B"; she was Ursa in Superman II, and also appeared in various geek franchises in the flesh (Conan the Destroyer, V: The Final Battle, Stargate, B5, etc.) or as a voice (Batman Beyond, Green Lantern, Doctor Who's Adventure Games, etc.).

REWATCHABILITY: Medium-Low - There's the seed of a philosophical dilemma in there, but the episode unwisely spends all its time on computers who can't make decisions anyway, and manipulating events so they reach the required impasse.
Space 1999

Anonymous said…
This is only halfway related, but. Trek fans will tell you that Fred Freiberger is responsible for the decline in quality in TOS's third season, and "Space: 1999" is sometimes held as "proof" that Freiberger wrecks everything he touches. Well, this doesn't speak to "Space: 1999" directly, but it DOES suggest that the real problem with TOS season 3 was Roddenberry abandoning the show and leaving Freiberger without any support:

I found this part telling:

"And for his part, Freiberger had some good ideas for Star Trek, that he lacked either the time or the ability to implement. He wanted to develop the supporting cast further, including Chekov and Scotty. He wanted more serious, relationship-based drama, and stronger female characters — one of Freiberger's main initiatives as producer was to hire three new female writers, in addition to Margaret Armen and Dorothy Fontana."

LiamKav said…
I got to the bit where it mentioned Nichelle Nichols wearing nothing but a cardigan and my mind started to wander.
February 7, 2015 at 9:11 AM