February 08, 2015
An ice-cold reflection of Koenig attempts to drain energy from Alpha. 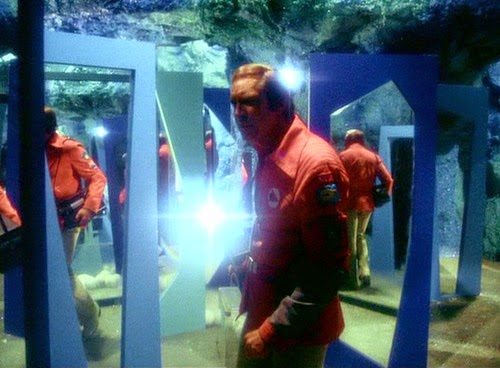 REVIEW: Hey remember when Martin Landau played his own evil twin on Columbo? Well he's at it again. This time, he falls prey to an advanced civilization that can create a mirror image of him and send it to the Moon to steal all its energy (everyone wants something from the Moon in Season 2) so it can be reborn from its miniaturized state. Like I said, advanced. The image is sometimes a good liar, but not a very good actor, and it faces mutiny at every turn, at least until the real Koenig returns to the Moon, leaving Tony and Maya to destroy the seed, something at which they spectacularly fail at. The nitty-gritty of the plot isn't well thought-out - just how not getting quite enough energy makes the seed of Kalthon blow up isn't very clear, and the episode could have done with more ambiguous villains than a maniacal laugh coming out of a hall of mirrors - but thankfully, that's not really what draws your attention.

The episode is actually quite concerned with how other characters react to mirror Koenig acting out of character. It's all about loyalty. Alan's is unwavering, mutiny even in extenuating circumstances against all his instincts. Disobeying an order seems physically painful to him. And he only really goes against Koenig when a second Koenig shows up on which he can hang that loyalty, even if he'd already started to question the false man's disloyalty to his own crew by ordering the destruction of Tony's Eagle. Helena is obviously predisposed to trust Koenig, and only recoils when what the intimacy they've shared seems absent. Physically, this is represented by an icy coldness to his touch. For those paying attention, the fact he calls her "Dr. Russell" is damning. Not surprisingly, it's the new cast members who are the first to reject Koenig. Maya, as science officer, questions things, and as an alien who's been known to somehow analyze other beings for her shapeshifting needs, senses something is wrong. She uses her relationship to Tony to make him break the chain of command. Everyone acts as they should, based on who they are close with.

And it looks pretty cool. Not perfect, but cool. The way Koenig's mirror image takes on a life of its own is well realized. The trap he is later lured into doesn't quite work visually - Tony and Maya don't have proper reflections when looking at him, except their hands...? - but it still has the right surreal feel. Mirror Koenig's destruction is a cool shattering effect. Even when we're just skulking around the station, there are things to look at. The first view out of the windows in a long time features more than just the usual gray hills, and we even get a good look at a map of Alpha detailing its sections. 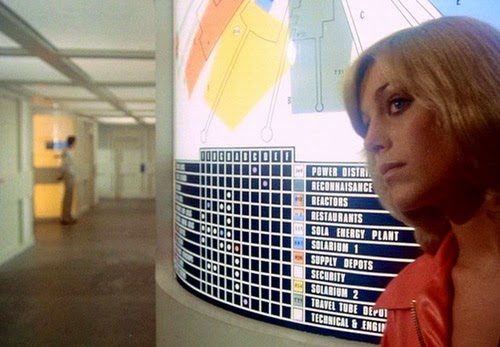 REWATCHABILITY: Medium - Definitely not air-tight, but the focus on characters' reactions and some surreal imagery makes this one better than most of Season 2's episodes to date.
Space 1999