February 09, 2015
A teenage crush on Tony makes Shermeen too eager to help an anti-matter man cross over into the positive universe. 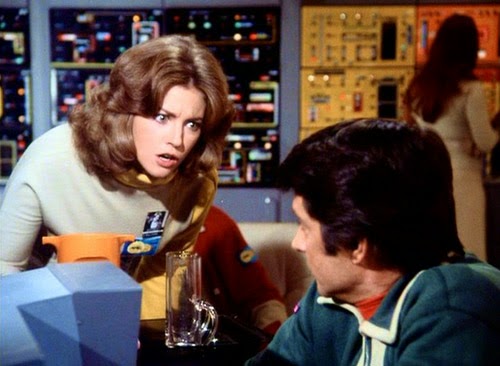 REVIEW: According to notes written in the script's margins, this seems to be the point at which Martin Landau lost interest in the project and didn't even want to do promos for it anymore. It seems his problem was more with the show becoming an ensemble piece where Tony, Maya and the guest-star get at least as much to do as Koenig. What he really should have been focusing his criticism on is how the script makes no damn sense. With just a few changes, it might actually have been something because the balance of characters, the visuals, and the plot in general aren't too bad.

A major problem is the notion that there's an anti-matter universe (I'll call it Qward for short), and just how it works. First, it contradicts what anti-matter was in previous episodes, but then the whole series contradicts itself between seasons, so let's let that go. Here, anti-matter people can appear in our world as transparent ghosts, except when they need to appear solid and deflect energy to keep the mystery going. In other words, the script isn't playing fair with the audience. But that's the least of it. We're supposed to be believe Qwardians evolve in reverse and indeed, live their lives in reverse from old age to youth, despite Vindrus not knowing the future. For people from another dimension, they sure know a lot about botany on positive universe planets, enough to turn one plant in hydroponics into a knock-out flower. Why is there a reptilian warrior among their number when Vindrus looks like a bald human? Why do they need to convince a vulnerable Shermeen to help them when they can hypnotize other Alphans so easily? If the transfer of matter into Qward to balance things out is necessary, why not just send rocks over instead of people? If Qwardians used to live in the positive universe until some strange accident occurred, what matter was transferred for balance's sake? Similarly, when the planet is shunted to Qward whole, what transfer takes place? The episode can't seem to follow its own silly rules. And what about Maya's anxiety over "remembering" how an alien-made machine works... did Psychon buy their matter converter from the same outlet? Make the episode about an alternate universe instead of anti-matter, change a line here and there, and you can make this work. Alas. The less said about the dead stupid coda in which Tony unironically thinks of making anti-matter beer the better.

The other question A Matter of Balance asks is just how there can be "teenagers" on Alpha. According to the calendar, it's now been 4½ years since Breakaway, and yet Shermeen, a trained botanist presumably since before the Moon left orbit, has a "teenage crush" on Tony. Was she an intern 5 years ago or something? (One Space 1999 comic shows her as a 10-year-old in 1999, visiting as part of a school program, which is perhaps going a bit too far.) It's all part of the rather terrible beer-making subplot, which gets even worse by introducing a high school drama element to it: A lame love triangle, a girl getting hysterical and unprofessional because Tony doesn't return her affections, etc. Worse, the base's high-ups get involved for some reason. You'd think Helena would have better things to do than "cure" Shermeen's teenage angst, and that Koenig wouldn't be worrying about such things. And yet, they do. Good thing Shermeen is a bit of pretty, or else these scenes would be intolerable.

HEY, ISN'T THAT... Nicholas Campbell is Eddie; he became a ubiquitous actor on Canadian television and cinema, probably best known for Da Vinci's Inquest. Lynne Frederick is Shermeen; best known for marrying both Peter Sellers and David Frost. Stuart Wilson is Vindrus; he's since been in everything from Lethal Weapons 3 to The Mask of Zorror to Hot Fuzz.

REWATCHABILITY: Medium-Low - I can't dislike it too much because it looks good and is fairly exciting, but damn, things happen just because they need to happen, with science and logic flying right out the window.
Space 1999

Jeremy Patrick said…
"A major problem is the notion that there's an anti-matter universe (I'll call it Qward for short), and just how it works. . . . The episode can't seem to follow its own silly rules."

I've gotta call you out on this one. If you watch the episode whilst IN the anti-matter universe, it makes PERFECT SENSE!
February 10, 2015 at 1:55 AM

LiamKav said…
Still doesn't explain how the Doctor got out of the Pandorica though.
February 10, 2015 at 1:21 PM