February 13, 2015
Alpha comes across a ship carrying a Psychon prisoner. 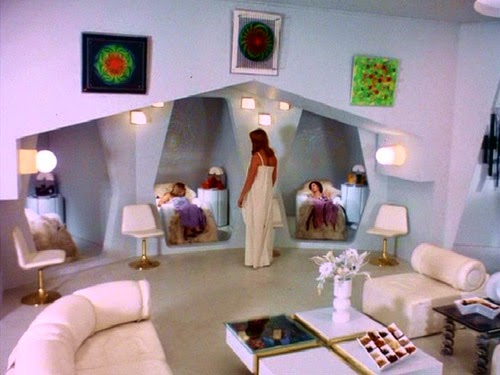 REVIEW: We've known for a while that Maya's people were out there, and we finally meet one of their number. Dorzak is a lot like her father Mentor, however; he may have been a great man once, but survival has turned him into a monster. And as with Mentor, Maya's admiration for him blinds her to his changed nature. The episode keeps that nature a mystery though. It's a case of one character's opinion against another, and for once Alan doesn't side with the wrong pretty face, even if there's still a darkness to the Crotons. Dorzak makes an interesting point about their peace and culture coming on the heels of a military take-over, and Clea's suicide probably wouldn't bear close examination. But if survival is a dirty business for the Psychons and Crotons, the Alphans have fared better, and so has Maya in their company. The success story of Moonbase Alpha is that they didn't let their desperate circumstances change who they were.

I'd want to credit that success to Koenig's leadership, but he's sadly absent. A weakness and a strength because while it's very odd to have him missing, it does give Tony, Alan and Maya more to do. Presumably, he's off with Sandra (we get useless Yasko) and Doctor Ben (his role played by a guy we've never met before). He missed a fair Maya adventure that tests various characters' loyalty, and is based on a moral dilemma and a mystery rather than random fighting with rubber-suited monsters. The set of the Croton ship is large and interesting (though you can spot design elements from the show's past), and Dorzak plays a nice switcheroo with Maya using her metamorphic abilities.

Where the episode is weakest is in any dialog that relates to science. The Crotons at first gives a very vague address  - the Croton Galaxy! - then revise it to the Croton "system", which is then way too crowded if it's got enough planets to found a whole Federation. These people use the universal plague signal, as if Alpha was part of a universal community that could recognize such a thing anyway. (Maybe Maya told them about it?) Koenig is apparently off looking at a string of asteroids that might make a suitable new home. Raise your hand if you think that sounds better than living on the Moon. Anyone? Anyone? Bueller? And it's a minor point, but why the hell is everyone pronouncing "stasis" as "stahhhsis"? It doesn't even sound right in the mouths of Brits and Aussies, and is positively bizarre in those of Americans. Took me right out of the story each time they said it, and they said it a lot.

HEY, ISN'T THAT... Kathryn Leigh Scott is Yesta; she was Maggie Evans on Dark Shadows.

REWATCHABILITY: Medium - A good enough Maya story, making a point similar to The Metamorph's. Too bad some of the better cast had to miss it.
Space 1999