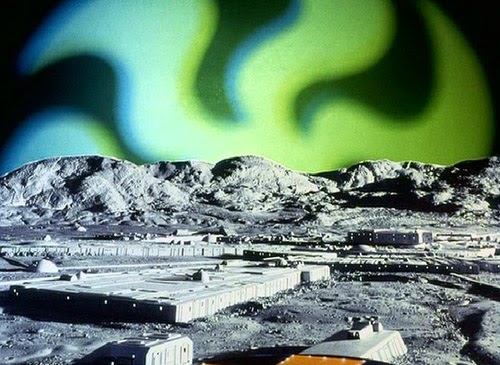 WHEN: The episode takes place 2308 days after Breakaway on Jan.7 2006, just two days after Devil's Planet apparently. It first aired on Dec.23 1976; it was actually the last episode broadcast before the 8-month hiatus.

REVIEW: Some of the details don't work for me, but the scientific explanation for what's happening is at least acceptable. It should be, because it's stolen wholesale from Star Trek's "Where No Man Has Gone Before". A weird effect in the sky boosts the ESP of certain members of the crew, one of which goes bad and starts talking about ruling Alpha. It's not Kirk's best friend, but Koenig's is seen as a hallucination. It's not the only wink at TOS either. Carolyn's final fate as a lobotomized "child" mirrors that of Uhura in "The Changeling", and we see people play three-dimensional chess! Copyright infringement? Obviously, the whole thing is equally derivative of classic 70s concerns with Gellerish psychic phenomena, the popular horror films of the time, and so on. Despite all that, there's a lot going on, and even those not "boosted" psychically by the Lambda wave, are still affected somehow. Seems the entity (and if it's not an entity, why does it explode when the tables are turned on Carolyn?) feeds or fuels negative emotions, and most of the powers it imparts do the same. So everyone's very angry in this episode, and there's a constant sense of urgency and stress.

So what doesn't exactly work? Well, for one thing, it takes way too long for the characters to draw a link between the space thingie and what's happening on Alpha. The first death - a girl is shattered from the inside in a telekinetic storm - is no outside human experience, it shouldn't spark the kind of murder investigation we see (and Tony is head of security now? first we've heard of it, I think). I do like that investigation, and it brings the show closer to its procedural roots, but it's unlikely Tony and Koenig would suspect human foul play in these circumstances, even if it turns out they're right. The script IS rather sexist given that it plays into the psychobitch stereotype. Not only is Carolyn dangerously possessive of her boyfriend, but her long-ditched rival leaves nasty messages to Helena on her reports. Does love always make women act so unprofessionally?

As for what works... Landau puts in an excellent and emotional performance when Koenig is haunted by visions of dead friends he feels responsible for, and balances that with a cool, collected commander who is able to beat Carolyn by voiding himself of negative emotion. "Mental judo" is an interesting twist on these psychic powers, and Carolyn's various insane tortures of the crew can be unsettling, especially how she turns Maya into a caterpillar, the better to stomp on or asphyxiate. I also appreciate the various tests run by Helena and co. In the 70s, these were actual scientific lines of inquiry even if they seem strange or silly today.

HEY, ISN'T THAT... Terrence Dicks wrote the script; he is one of the most famous Doctor Who script editors, overseeing the Jon Pertwee era and writing most of the Target novelizations. Gregory De Polnay is Pete Garforth; he played D.84 in Doctor Who's The Robots of Death. Lydia Lisle is Sally Martin; she played John Merrick's mother in The Elephant Man, and briefly had a recurring role on The Tomorrow People. Dallas Adams is Koenig's ghostly best friend Sam; he was Peri's stepdad Howard on Doctor Who.

REWATCHABILITY: Medium - The episodes that deal with the supernatural always seem strange today, but this isn't a bad one. Lots of action and horror.
Space 1999

Timothy S. Brannan said…
Of all the episodes this is one I remember the most. I can recall enjoying the supernatural elements of it while at the same time being irritated by them being in a sci-fi show.
February 17, 2015 at 10:13 AM

Anonymous said…
This is EXACTLY what Brony was trying to warn us about. But we were too blind to see.
February 18, 2015 at 5:01 PM

Anonymous said…
Very disappointed in this episode; it introduces its premise but then fails to build on it in any way. Despite the title, not once do they Lambada, nor do they perform any other type of Latin dance. When Maya turned into a caterpillar I was hoping she'd make up for it by dancing with all those legs, but nope, all she did was nearly get squished and then suffocated.
February 24, 2015 at 8:54 AM

Siskoid said…
This would have been one instance where they guessed what 1999 would really be like.