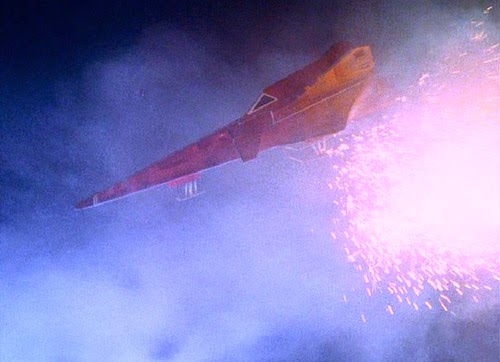 WHEN: The episode takes place 2310 days after Breakaway on Jan.9 2006, making a busy week for Alpha, since The Lambda Factor started just 2 days ago (and probably lasted into this episode), and Devil's Planet 2 days before that! It first aired on Oct.29 1977.

OH THE NOSTALGIA! The show has used those light panels with splatters of paint so often, it's no wonder this is one of the things I still remember from watching it the first time around.

REVIEW: They stole the title from a Star Trek episode (so where's the giant protozoa, man?), but regardless, it's one that would have fit better on Devil's Planet, and Devil's Planet on this. That episode was apparently 4 days ago, Alpha time, and also features a green planet onto which an Eagle crashes much in the same way. Might've spread those babies apart a little more (granted, they aired almost 2 months apart). Aside from the title, this is a perfectly fair planetary exploration episode, with the hope of a new home dangled in the Alphans' faces before things turn sour. Very sour, in fact. At about the same time, people start going mad, food and water turn poisonous, and metal corrodes destroying Alpha's technology.

The action-adventure elements are fairly strong. A man hunt for a violent Tony, for example, and of course, an Eagle's explosive crash. Helena and Maya, left on Alpha, figure out a way to use a non-metallic orbital glider to reach the planet and help their men. It's a cool sequence, with exploding windows and a rock and roll landing. The guys find a way to gain access to an overgrown structure and discover the records they'll need to figure things out before the atmosphere becomes entirely toxic. Those records are narrated by an alien with a very bad wig (it looks better on the skeleton, I guess). And in the end, it becomes a first contact story. Koenig must find a way to communicate with the entity that's inadvertently causing all of this. There's a silly silver suit and a pair of ski goggles involved, but that's not as important as showing trust once the talking begins. "I am I" is an interesting alien for not realizing it isn't the only life in the universe, but there's no real justification of why or how it's affecting everyone and everything this way. And before there's any hope of understanding its nature, we're off. The Moon's already moving away. Gotta go. See ya never.

Which makes me think Alpha should have some kind of stand-by protocol when in range of a potentially habitable planet. Even when things start to go wrong, you don't know that they won't be fine again before you're out of range. For the span of 4 days, they missed out on 2 or 3 golden opportunity - this unnamed planet (which we could call Eden based on the script's original title, The Face of Eden) and either Ellna or its habitable moon Entra - all because it took too long to resolve matters. No wonder Alpha is now spawning discipline problems and mutinies.

HEY, ISN'T THAT... Karl Held is Jerry Travis; he was Lindstrom in Star Trek's The Return of the Archons. Nadim Sawalha is Zoran; he appeared in a couple James Bond pictures, The Spy Who Loved Me and The Living Daylights.

REWATCHABILITY: Medium - An okay action adventure with a Star Trek feel and some rare, cool action for Helena and Maya, but just okay. Its alien's existence isn't justified or explained, so it lacks follow-through.
Space 1999

Jeremy Patrick said…
So is it fair to say the writers just picked the "number of days since leaving earth" fairly randomly each episode, with no idea somebody thirty years later would try to make sense of them?
February 18, 2015 at 11:38 PM

Siskoid said…
Completely fair. For a while it was +101 days, then suddenly +2 days. Season 2 has plenty of action that should be taking place in Season 1 according to those logs.

Maybe Helena was trolling future generations to spite Koenig for making her the only one who had to record logs.
February 19, 2015 at 7:56 AM