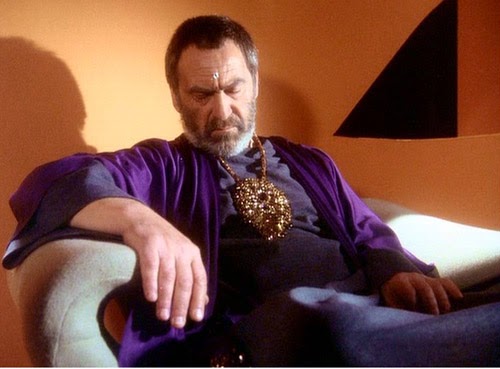 REVIEW: A typical space opera story - aliens who want the most unique member of the crew for some purpose - it is nevertheless elevated by the strength of its guest stars, especially Patrick Troughton as the aging Archon, and some cool Die Hard-type action for Koenig. Still, the episode does sometimes come off as the sets and props departments' greatest hits. Spotting the various elements of memorable set dressing that appeared in other episodes could be a fun game. But since the Dorcons - it's hard to take them seriously with that name - have a thousand-planet empire and are near unbeatable, it's entirely possible people around the galaxy have copied their aesthetic (or bought their goods, etc.). That's what being imperialists is all about. The one question that can't really be answered is why their leader doesn't already have a Psychon spine. You'd think an immortal Archon would a long been in charge.

The Dorcons are clearly modeled on the Roman Empire, with the Caligula-like mad heir to the Archon even paraphrasing the gladiators' salute. It's like an SF version of I, Claudius. While Caligula, uhm, Malic, is naturally over the top, Ann Firbank as Consul Varda has poise and casual menace, while the Mighty Trout underplays his villainy as something that has to be done. He in no way relishes it. He just represents a culture that doesn't see non-Dorcon lives as important. Unlike his nephew, there is no cruelty in him. His is a quiet, institutional evil. The man himself, and I'm certainly biased because of who plays him, does come across as sympathetic. That scene where he's sleeping on his throne, for example, generates much pathos. The production uses that quality of Troughton's to underscore the Dorcons' brand of evil, such as when he sincerely calls himself a victim... of immortality. Well.

As an action piece, it features an okay space battle. The Dorcon ship might as well be a still though. On the Moonbase, there's a decent scuffle when some Alphans mutiny over Koenig's refusal to let Maya sacrifice herself. The Dorcons zap Tony so it's Koenig who piggybacks on the transport beam and tries to rescue Maya, and he's soon crawling through air ducts (not a tired trope on Space 1999) and getting the job done. My only real complaint when it comes to the action beats is the effect the Dorcon gun has on its victims. The posture it invariably forces on people is completely ridiculous. Once we get through the telegraphed solution and all the interesting guest characters are dead at the hands of the one that isn't, we're back on Alpha... and we leave the series (give or take, I plan to cover the fan film that's on the DVD) with an unassuming and unoriginal epilogue where the two resident couples do some flirting. Now that IS a tired Space 1999 trope.

HEY, ISN'T THAT... Patrick Troughton is the Archon; I probably don't have to tell you he was the second Doctor Who.

REWATCHABILITY: Medium - A standard plot saved by strong acting. The show ends on neither a high nor a low.
Space 1999

dangermash aka The Artistic Actuary said…
This episode was on just now. Great moment just as opening credits are finishing. Some guy holding either a circuit board or a report (I'm not sure). Koenig says "Let me see that". So the guy hands it over. Koenig looks at both sides. Clearly doesn't know what it is. Hands it back. Brilliantly funny.
August 3, 2022 at 3:38 PM