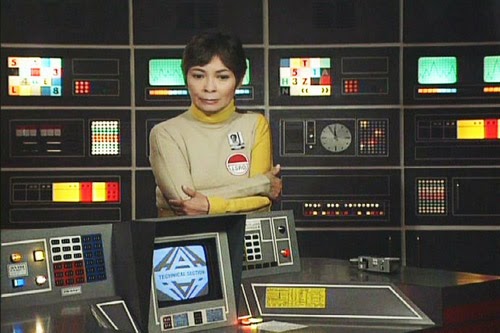 WHEN: The "episode" takes place some 20 years after Breakaway (or from Journey to Where?; Sandra says "since we lost contact with you"). Filmed Aug.29 1999 (the REAL 1999), this 7-minute fan film was shown at the Space: 1999 Breakaway Convention in Los Angeles on Sep.13 1999. Though not the only Space 1999 fan film, it is included on the DVD set and was written by series script editor Johnny Byrne, so is included in these reviews.

REVIEW: What Byrne has written here is a love letter to the series, read out by Sandra, explaining the show's ethos and purpose, something against which we could very well compare the finished product. In fact, Message from Moonbase Alpha could very well be shown first, as if a prologue to the mission logs represented by the episodes themselves. The only thing that breaks the spell - and this is true whether you play it first or last - is the flashbacks that couldn't possibly be pulled from some video feed and replayed by Sandra. Nevertheless, Zienia Merton gives a strong, emotional performance that is worth seeing.

As a "whatever happened to" story, it's slim, but offers some closure. Alpha's life support finally degrades to the point where the crew has no choice but move to the next habitable-ish planet. Again, some divine hand seems to be guiding them because the Moon suddenly veers off course, but whether this hand is good or evil is not known, and since they'll be in range for only 6 days, they can't be sure it's the right decision. Moonbase Alpha really is the Hamlet of moonbases, isn't it? (I bet that's the first time that sentence has been written.) They keep finding excuses (for 20 years or more!) not to settle on habitable planets they find, and they may rue every time they were too picky. Apparently, there was a big debate about it, and the vote was close even with life support failing. It even looks like Sandra was on the losing side. Notably, while we're in the Season 2 continuity (uniforms, sets, Maya mentioned), Sandra does eulogize Bergman and Paul, along with characters who died in Season 1. I guess this is Byrne's explanation for what happened to these characters when the show was retooled. They were lost (not necessarily died) on an unseen mission. Not that it explains the other changes, of course.

The film was apparently meant to generate interest in a revival. Sandra mentions the Moon would return to Terra Alpha's orbit in 25 years' time, which could have been used as a springboard for a new group of Alphans, children of the original - possibly even with an aged member of the regular cast in tow - taking their chances out in space, fulfilling Alpha's destiny of spreading humanity out across the universe. It didn't happen then, and while a revival was once again being touted in 2012, this "Space 2099", if it ever happens, is definitely going to be a reboot, not a sequel. For that version of Moonbase Alpha, this is the official end.

REWATCHABILITY: Medium - It's a nice speech and well delivered, but that's all it is, intercut with clips from the show.
Space 1999

Anonymous said…
"The only thing that breaks the spell - and this is true whether you play it first or last - is the flashbacks that couldn't possibly be pulled from some video feed and replayed by Sandra."

Or she's a total perv and had cameras installed all over Moonbase Alpha. Depending on which specific stirrings she sparked in you, that might be a plus.