Got a couple of DVDs this week: Sky Captain and the World of Tomorrow, and Justified Season 5.

At the movies: Birdman or (The Unexpected Virtue of Ignorance) is  presumably the only superhero movie to ever make the Best Picture category. Not that it's your usual superhero action film. Rather, it's about a washed-up movie star who used to PLAY a superhero, though he does appear to have actual powers in the film. That actor is now trying to gain some kind of credibility by staging a play on Broadway based on a Raymond Chandler novel, and this brings us to the other unusual aspect of the film - it appears to be a single unbroken take, very much working LIKE theater. But beyond the strange premise (superheroes via the Vertigo aesthetic) and maverick technique, what I liked about the film was its various interconnected levels. Here we have actors playing actors who are echoes of themselves, acting in a play which creates a further echo of who they are in the film. Michael Keaton DID play a superhero in the 90s, and Edward Norton IS a notoriously difficult to work with genius. And this is all quite aside from what the Chandler play says about the characters playing ITS characters. The film is also a meditation on the fleeting nature of fame, and how one handles it, seeks it, or ignores it. I suspect it's an Oscar darling because the portrayal of actors and their craft feels true to life. It certainly seems so, and I know enough theater actors to stake my reputation on it. And hey, I'm a sucker for magical realism, which Birdman also delivers. As you can see, it's a rich film, surprising on several levels.

DVDs: I can imagine the natural reaction to hearing that they turned the Cohen Bros.' Fargo into a television show is to ask "why?" and dismiss it as a redundancy that can only undermine the power of the original film. And I had that reaction. But then people started talking about it on Twitter, and I decided to check it out for myself. I'm so glad I did. Fargo is not a stretched-out 10-episode reprise of the movie. It's an entirely different story also set in the Cohen Bros.' version of Minnesota. There is one overt connection to the film, but otherwise, it is a remix of every Cohens film you've ever seen, paying homage to the body of work, but offering its own off-beat characters, stupid criminals, and beautifully shot suspense. Molly is a small town policewoman, but she isn't Marge. Martin Freeman's Lester is a loser salesman who gets in over his head, but he isn't Jerry. And though you could say Billy Bob Thornton's brilliant hitman/social engineer Malvo is akin to No Country for Old Men's Chigurh, he's his own breed of nasty. I heard some people bristled at the fact the similarly-structured True Detective lost the Golden Globe to Fargo, but I have to say I also prefer it, and recommend it to anyone who's ever been a fan of the Cohens. The DVD includes a commentary track by the showrunner and one star or another on select episodes, deleted scenes for most, and a large number of making of featurettes that discuss everything you might want to see discussed. I for one can't wait for another not-true true story from snowy but friendly Minnesota (as played by Alberta), perhaps that Sioux Falls incident we keep hearing about?

Before we had the Cohen Brothers, we had Alfred Hitchcock. As if I wasn't paranoid enough after Fargo, I decided to crack open that Hitchcock collection I got before Christmas. I've see way too few of the master of suspense's work (Lifeboat, Psycho, The Birds, the TV show, I think that's it), so I started with the earliest film in the set, and will make my way from there. That would be Saboteur, a rather patriotic war-time film about a man falsely accused of sabotage running across the country and encountering all sorts of quirky types in his quest to find the real culprit and exonerate himself. I'd never realized it before juxtaposing the two, but there really is close parentage between Hitch and the Cohens. It's not just the unraveling perfect crimes or the atmospheric suspense, it's also the unusual characters one meets, even for a single scene. In Saboteur, there's a meaning to it, that even the most unlikely person can do their bit for their country. "Good Americans" are thus represented by a blind old man (a stand-out scene) and a train car full of sideshow freaks. These are contrasted with rich, sophisticated Fifth Columnists. It's a more complex film than it first appears; my only real complaint being the abruptness of the ending, though it is a memorable enough sequence. The DVD includes a half-hour making of that hinges almost entirely on Norman Lloyd's recollections (he played the actual saboteur and became one of Hitchcock's most frequent collaborators), production photos, storyboards, a few production notes and a vintage trailer. This seems to be the basic extras package for every disc in the set.

Next up, Shadow of a Doubt, famously Hitchcock's favorite film of his. It's not mine, but the more I think about it, the more I like it. It grows on you. Joseph Cotten plays dashing young Uncle Charlie who returns to his innocent and friendly home town where Teresa Wright's young Charlie (his niece Charlotte), who initially admires him, begins to suspect he's not the man she thinks he is. It's a tour de force in creating a relatable villain that creeps you out as much as he does his niece the more things come to light. Like her, you're holding out hope it's all a big misunderstanding, and I'm not saying if it is or not. Meant as the invasion of corruption into naive small-town America, the setting will make it seem rather un-Hitchcockian at first, and perhaps that's why it takes a while to really get into it. As with Saboteur, lots of interesting characters to sink one's teeth into. I could take or leave the precocious little girl, but the uptight mom is a delight, as are the two older gentlemen whose favorite topic of discussion is how they would murder one another without getting caught. Great macabre humor. The DVD's making of uses Hitchcock's daughter to patch in holes left by the film's survivors, Wright and frequent collaborator Hume Cronyn.

Funny I should watch Rope the same week as Birdman, because this too is meant to look like a single continuous take. Based on a play, it's also meant to play out in real time (which Birdman does not), and indeed, the acting and dialog are rather theatrical. Which is fine by me. The continuity of it is another "rope" to follow in this tight thriller about a couple of sociopaths who strangle a fellow student for the artistry of it, then invite various people he knew to a dinner party unknowingly held over his makeshift casket, in a sense daring their former professor (Jimmy Stewart) to catch them. Absent any real positive figure to hang your sympathy on - even Stewart's "detective" has a nasty role to play in the boys' murder - this is a very funny black comedy. Oscar Wilde meets Edgar Alan Poe, if you will. Quite fun, and a strong technical achievement, no matter what the screenwriter says in the making of (he's really rather critical of the visuals). That making of - and we're starting to get more and more survivors; this one was made in 1948 and is Hithcock's first color picture - makes a big thing of Rope being about gay characters, something that may have been subtext to the director and actors, but is pretty invisible in the film. Much ado about nothing.

And now for my weekly I-MUST-CheckMovies project. I've seen too little Leone for my own good, and next on the list of "most seen and favorited" was The Good, the Bad and the Ugly. A great, if somewhat long western that features iconic western archetypes whose paths cross in their quest for treasure, a quest that also intersects the American Civil War. The latter provides an epic backdrop to the story, as well as a sense that these western icons are simply floating through a geography of fiction and history, commenting on these events from the inside. It's not about historical accuracy. It's about the Old West as mythology. Such an icon of a film that many parts of it - the music especially - will seem familiar the first time you see it; that's to be expected. And yet, it surprised me at every turn, right up to the highly visual showdown between the three characters. I realize I'm seeing Leone's big western cycle in reverse (my first was Once Upon a Time in the West), but so be it. I'll discover the earlier Dollars films in due course. 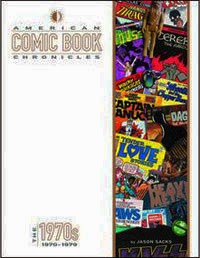 Books: Finished TwoMorrows' American Comic Book Chronicles - the 1970s (by Jason Sacks), covering an era that I knew very little about, so got the most out of. In the 70s, I was a small child who read French bande dessinée mostly, and learned to read English thanks to Richie Rich (the undisputed bestseller of the 70s). The handsomely illustrated history discusses everything from Marvel's attempts at feminism, to the DC Implosion, to the birth of such independent mainstays as Cerebus and Elfquest. Sacks is perhaps too interested in sales figures, especially early on, but then this was an era when sales took a downward turn, one that would lead to the birth of the Direct Market. Despite that little quirk, the volume was, like the rest of the series, a fount of information on comics and comics properties in other media, with plenty of quotes from comics professionals (some exclusive to the book) to support the author's narrative. 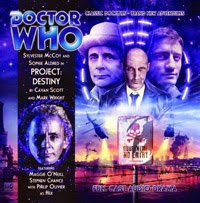 Audios: After the Destiny of the Doctor, I am once more plunging into Doctor Who's main line from Big Finish, and specifically into 7th Doctor stories. Starting a trio of Doc7, Ace and Hex stories, Project: Destiny by Cavan Scott and Mark Wright is a sequel to both Project: Twilight and Project: Lazarus, and features the same villains, Nimrod and the Forge. It's been a while since I've listened to those audios, so the connections are something musty, though there's enough back story given that you won't get lost (just feel like you really need to go back to appreciate the whole tapestry), a feeling that continues through to the next audio A Death in the Family (I'm in the middle of it; we'll discuss it next week). The plot about a virus that turns people into insects and a mass evacuation of London is academic, it's what impact all of this, and the subsequent revelations, has on Hex that matter. It's a very important story for him, one that may decide his future aboard the TARDIS. Definitely one of the better audio companions, I can't wait to see what this all means for him, and dread it at the same time.

Hyperion to a Satyr posts this week:
V.ii. Duel and Deaths - Zeffirelli '90
Doctor Who Geekly roundup

JeffJedi said…
Some say the dollars films are actually filmed in reverse because of technology and weapons used in the films. The newer movies used older weapons like Single Action pistols instead of double action.

Clint also gains his Poncho in this movie but already has it in the earlier ones.
February 12, 2015 at 3:37 AM