February 11, 2015
Yesterday, we talked about how the Warlock of Ys never got no respect. Well, that's even more obvious when we look at Justice League of America #51 (1967, a year after his first appearance) when Green Lantern corrupts his name!

The Warlock of Dis? That's not the same place at all! But don't worry, Zatanna - by way of Gerry Conway in JLA #161 - explains the flub away: 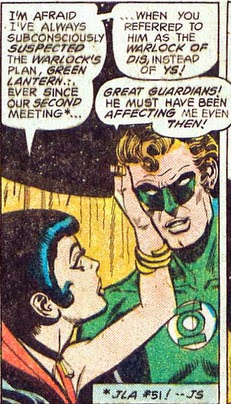 This story happened in 1978. That's a long freakin' time for Zee to hold in that piece of pedantry! Verily, the retcon we never knew we needed!

But does it even make sense? If the Warlock of Ys was hidden away inside Green Lantern's mind, would he get his own name wrong? I call shenanigans, Mr. Conway.

Now are we going to talk about why Zatanna and Hal Jordan never had an affair?
Comics Green Lantern JLA

American Hawkman said…
Hal and Zatanna were never a thing because Barry called dibs, obviously. If any DC hero lives by the Bro Code, it's HAL.
February 11, 2015 at 7:50 AM

Timothy S. Brannan said…
Magical interference is the only thing that will explain that horrible costume Zee was wearing in '78.
February 11, 2015 at 8:26 AM

Hal's into carnival ladies. The more they smell of cigarettes and funnel cakes, the better.
February 11, 2015 at 8:40 AM

Siskoid said…
I feel like there should be a blog to defend the maligned ladies of comics - Kari Limbo, Doreen Day, and yes, even Jean Loring.

Erich said…
Hmm, bringing up a tiny discrepancy in dialogue decades later...are you sure this was written by Gerry Conway and not Roy Thomas?
February 11, 2015 at 10:59 AM

American Hawkman said…
Mavis Trent, the patron saint of maligned comics women. :) Oh, and poor Eve Doremus, who even Mark Waid didn't remember enough to give the right characterization to later. Definitely Fiona Webb. Or the JLI era Hawkwoman, who is probably the single most screwed-over character in DC comics history.
February 11, 2015 at 11:09 AM

Siskoid said…
Erich: Roy Thomas was still at Marvel when the issue was published, so he's guiltless of that one!
February 11, 2015 at 11:29 AM