Who's the Viking Commando? 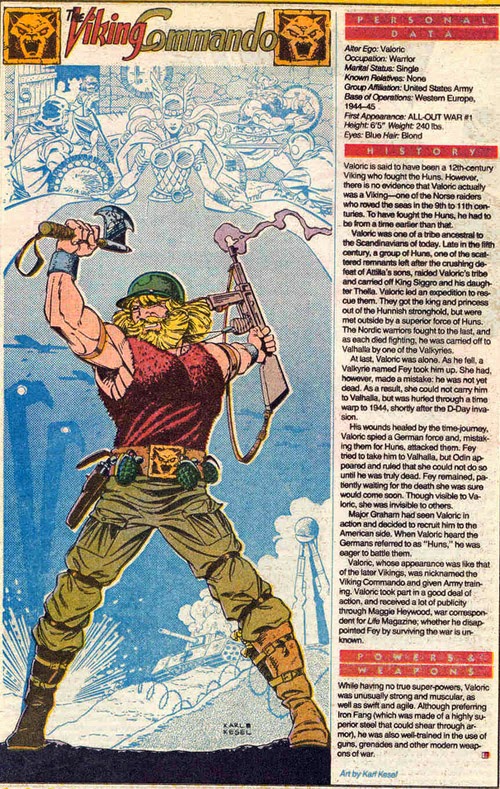 The facts: Viking Commando was created by Robert Kanigher and George Evans to headline a new (but short-lived at only 6 issues) war title called All-Out War (1979-80). His story briefly continued as a back-up in Unknown Soldier #266-267 (1982).
How you could have heard of him: Beyond Who's Who and History of the DC Universe, there hasn't been any call to even see Viking Commando since the Crisis. For shame.
Example story: All-Out War #2 (1979) "No Miracles -- No Survivors!" by Robert Kanigher and George Evans 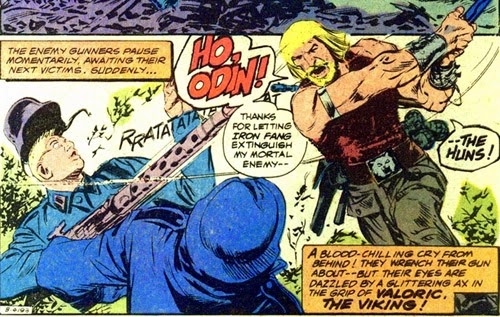 The first issue of All-Out War showed how Valoric almost died in battle, was taken by a Valkyrie by mistake before he was dead, was bounced into a time warp to 1944, and got some army training when he told the Americans he wanted to help them kill the Huns. Issue 2 shows us some of that awesome combined U.S./Viking training in action. More or less a rogue soldier moving behind the lines and killing Nazis, this story sees him bond with a couple of French kids, including a young girl who's lost the use of her legs and is trying to reach a shrine known for its healing properties. Just a young girl being pulled along on a small cart, so of course the Luftwaffe has to target them. They're evil, yo. 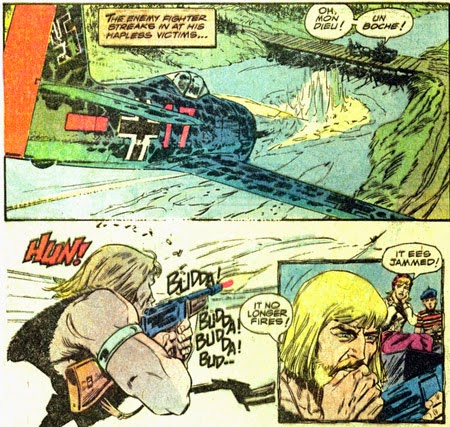 Or as the old Viking saying goes, they're AXE FODDER. 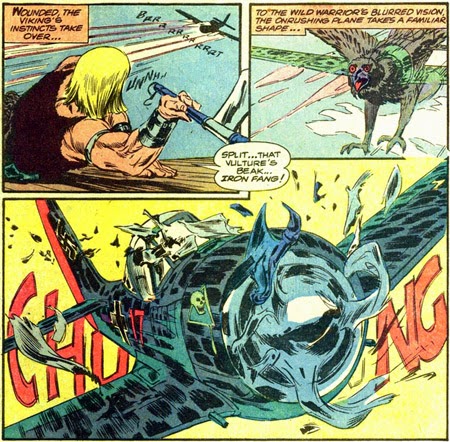 While Valoric is downing planes with thrown weapons (has he won the war yet?), Fey the Valkyrie dogs his every step. I mean, he's sure to get himself killed, right? She can take him to Valhalla tout de suite and resume her shieldmaidenly duties (if you know what I mean), right? And wouldn't you know it, the plane crashes right on top of Valoric and he almost drowns in the river. That's an ALMOST, Fey!

Since there's no Norse religion no more, Odin has nothing better to do that look over Fey's shoulder the whole time. Who knew the Æsir were such micro-managers? Pierre and Celeste nurse him back to health, and he has the opportunity to save their baguette from the Nazis again. He vows to help Celeste reach the shrine, but it gets bombed to dust before they get there. In retaliation, the Viking Commando springs into action and kills a tank crew. 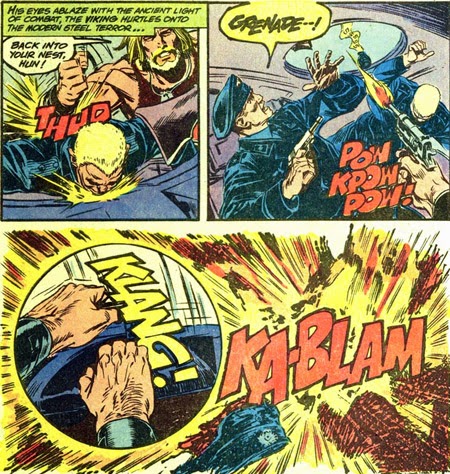 He then uses its machine gun to mow down the German army. He got one HECK of a crash course in modern warfare, I must say. But our Hun-killer isn't invulnerable and a sniper gets him. Only one person is happy about this:

Oh Fey (can I call you Tina?), check his pulse this time! Young Celeste sees the Valkyrie and the spiritual experience has a healing effect on her legs! The shrine rubble obviously still has some potency. 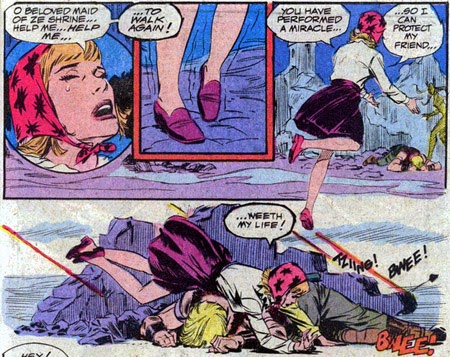 Her intervention allows the U.S. army to shoot the sniper before Valoric is killed, and Tina vows that one day, yes one day, she'll see the Viking Commando dead! But not now; that boy has a definite future in the Allied armed forces! Even the general who wanted nothing to do with him earlier has seen the error of his ways. 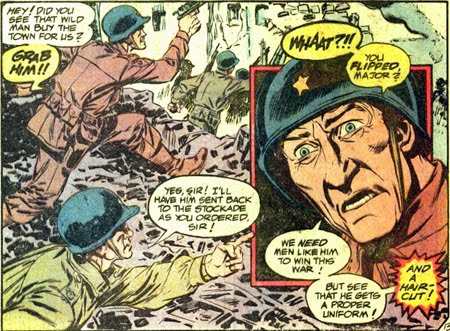 We never did find out if Fey got her wish (probably), or if Valoric ever got that haircut (probably not), as the Viking Commando was created too late in the history of war comics to leave much of a mark. That's too bad, because these are crazy action comics on par with DC's other great high concept war comics, strips like the Haunted Tank, the Unknown Soldier or the Losers. I mean, why are the Creature Commandos still around, but not Valoric? They didn't even put him in the most recent War That Time Forgot mini-series. Shame! If Kanigher has created him just 10 years earlier, he'd probably be one of the go-to Weird War II heroes. REVIVAL!!!

Who's Next? A villain comes forward. He looks legit. Was probably around all the time in the Silver Age. Uhm, no. You wouldn't believe how few appearances he's made.
Comics Who's This?

American Hawkman said…
I unconditionally love the Viking Commando. One of the best of the DC Weird War characters, he really is due for a comeback any day now. I think that the presence of the Nordic gods has been what's held him back... nobody wants to come across as a poor man's Thor, sadly.
February 3, 2015 at 7:42 AM

Siskoid said…
That's as good a theory as any. It's as if there were an Amalgam comic that merged Thor with Sgt. Rock or something.
February 3, 2015 at 9:06 AM

Anonymous said…
I had "All Out War" #2 back in the day, bought fresh from Convenient Food Mart. So the Viking Commando has a fond if obscure place in my heart.

One thing that confused me for the longest time was calling the Germans "Huns": where did they get the name? Why would a Viking use those other famous despoilers of civilization as a slur? The answer, I have come to conclude, is the Roman Empire. I suspect there is a cultural divide in Europe between people who consider themselves as part of Rome's legacy and those who don't. If you live in, say, Gaul or whatever it's called these days*, the perception of the Huns was that they were nothing but a scourge upon the face of humanity. But if you lived in the territories that the Romans never assimilated**, Attila was a conqueror you could be at least a little proud of.

As for the German military associating themselves with Huns, Kaiser Wilhelm did a radio address at the start of WWI, likening the Germans to the Huns of old. It was a self-chosen term, so even the Viking Commando feels it's appropriate.


*: France, named after the Franks, who famously helped the Romans stop Attila's advance.

**: Germany, known as "Allemagne" in French, which gets its name from the Alemanni, a confederation of Germanic tribes who coincidentally enough were allied with Attila. Incidentally that's one of like six different basic names for Germany; nobody can agree on what to call Germany.
February 3, 2015 at 2:47 PM

Siskoid said…
In the comics, Valoric never calls himself a Viking, and if his tribe really was enemies with the historical Huns, he's probably from a tribe that's precursor to the Vikings.

It's the army guys who call him a Viking, and they're the ones who call the Germans "Huns", which is what convinces Valoric to side with them. So it's all a big misunderstanding.
February 3, 2015 at 2:55 PM

Anonymous said…
Thanks! I bet that would have been clearer to me if I'd visited Convenient Food Mart a month earlier.

I still stand by the European Attila Divide theory, but I'm not sure how to do further research on it.

While I'm playing Word Nerd, about "fey" -- the word once had a very different meaning. I love this essay (long but worth a person's time):

At one point he speaks of "fey":

Another Viking term was "fey." People now understand it to mean effeminate. Previously it meant odd, and before that uncanny, fairylike. That was back when fairyland was the most sinister place people could imagine. The Old Norse word meant "doomed." It was used to refer to an eerie mood that would come over people in battle, a kind of transcendent despair. The state was described vividly by an American reporter, Tom Lea, in the midst of the desperate Battle of Peleliu in the South Pacific. He felt something inside of himself, some instinctive psychic urge to keep himself alive, finally collapse at the sight of one more dead soldier in the ruins of a tropical jungle: "He seemed so quiet and empty and past all the small things a man could love or hate. I suddenly knew I no longer had to defend my beating heart against the stillness of death. There was no defense."

There was no defense -- that's fey. People go through battle willing the bullet to miss, the shelling to stop, the heart to go on beating -- and then they feel something in their soul surrender, and they give in to everything they've been most afraid of. It's like a glimpse of eternity. Whether the battle is lost or won, it will never end; it has wholly taken over the soul. Sometimes men say afterward that the most terrifying moment of any battle is seeing a fey look on the faces of the soldiers standing next to them.

Jeff R. said…
Come on, some of us remember the Viking Commando from his advise column on the Seven Hells blog back in the oughts...
February 4, 2015 at 2:47 PM

Siskoid said…
With every apology to Devon because I did enjoy Seven Hells quite a bit, but it's been years! I quite forgot how he used Valoric as an advice columnist!
February 4, 2015 at 3:10 PM

Devon Sanders said…
Thanks for remembering the "All-Out Living with The Viking Commando" column, Siskoid!

I still occasionally update Seven Hells just for my own joy. You never know. I could fire up the ol' advice column again, for old times sake.
October 19, 2017 at 2:20 PM