Who's the Wyoming Kid? 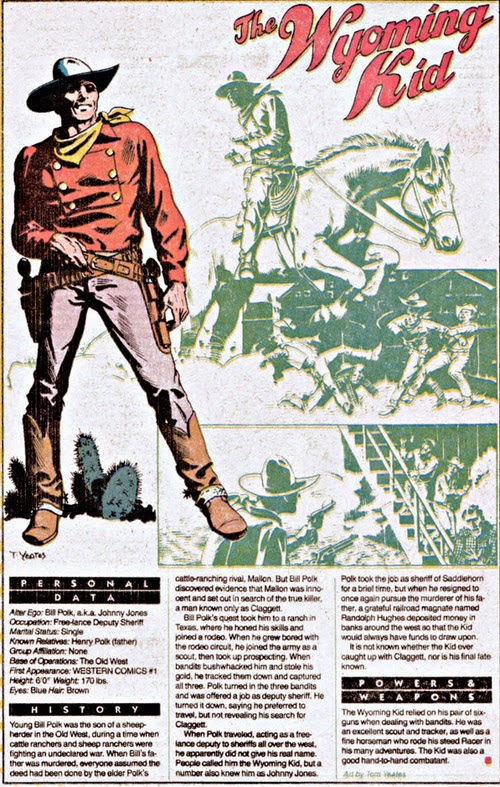 The facts: The Wyoming Kid may seem like a generic western character, and if we lost sight of him after 1961, it's really because his adventures weren't reprinted in one of those 100-page DC books of the 70s, nor did he show up during the Crisis. But in point of fact, this Jack Schiff/Howard Sherman creation appeared in all 85 issues of Western Comics (1948-1961) AND World's Finest Comics #42-64 (1949-1953), sharing #42's cover with Superman and Batman! So he was somebody!
How you could have heard of him: They finally threw him a bone in DC Universe: Legacies #3, the issue that chronicles the DCU's Old West.
Example story: Western Comics #7 (1949) "The Town That Was Never Robbed" by Howard Sherman (writer unknown) 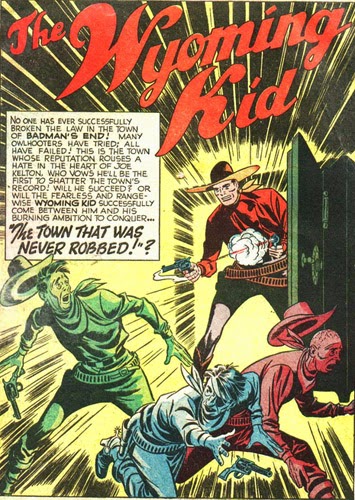 The thing with straight western stars is that - and this was true of Trail Boss Matt Savage too - they didn't have a particular "hook" for future DC writers to get a hold of. No supernatural element, no mask or costume, no gimmick, nothing "comic booky" per se. And that's I think they were forgotten. Face it, there's probably little that's different between a Wyoming Kid and a Trail Boss strip. The scripts are almost interchangeable. Still, the Wyoming Kid did get over 100 appearances, crossing from the Golden Age into the Silver Age. We've got to respect that. Let's wade into the Wyoming brush, shall we?

This is the story of Badman's End, a town that's never been successfully robbed, and it looks like the reason is that it's because everyone there is a lawman. Here's what happens when you try: 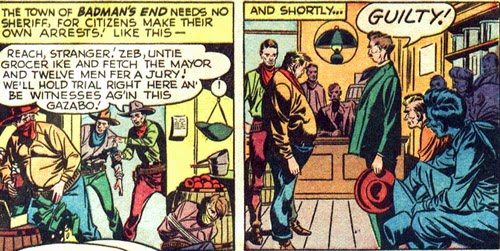 Swift, decisive justice. No waiting. Well, the town's reputation becomes a kind of challenge to every lawless owlhooter in the West (I don't know what that means either, but the splash page has a poetry I simply must repeat). Joe Kelton is one such hooter, and he's got a foolproof plan. On the other side of the moral divide, Badman's End attracts someone else...

Our first scene with the Wyoming Kid and what strikes me is that he has a thick western accent. Despite the glut of western features in the 50s - and I'll admit I haven't read too many, all things considered - it's not something you see in that many strips. No idea of it's got the proper Wyoming flavor. Anyway, the Kid finds a ghost town, one where people have apparently abandoned their dinners still warm. Spooked, he runs for his "hoss" and bolts when gunfire from nowhere almost takes his head off. He hides in the woods and becomes witness to the Kelton Gang taking advantage of the empty town to take its bank's safe. Well, not if the Wyoming Kid and his unerring Clint Eastwood aim have anything to say about it! 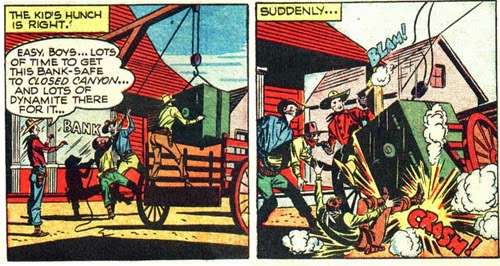 Unfortunately, Kelton has a man on the roof who knocks the Kid out. Then then blow the safe open and leave the unconscious Kid under the metal door to be found by the townspeople. Yes, it's a door-frame (you can shoot me later, I won't object), plus a bandana over his face (proof!) and the Kid is soon meets Badman's End's brand of rushed justice. These are guys you could use as examples if you had to oppose the death penalty in debate club. 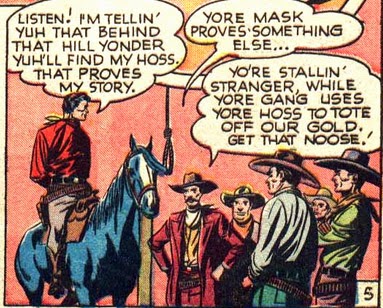 But while that might not be his own hoss, the Wyoming Kid shows he's a hoss whisperer by making it take off before he can swing. And with the townspeople in hoss--I mean hot pursuit, he runs for Cold Canyon where he overheard the Gang was hiding out (well, what he actually heard was they were hiding out in CLOSED Canyon - oops!). Kelton's men immediately think the Wyoming Kid is leading his own posse. 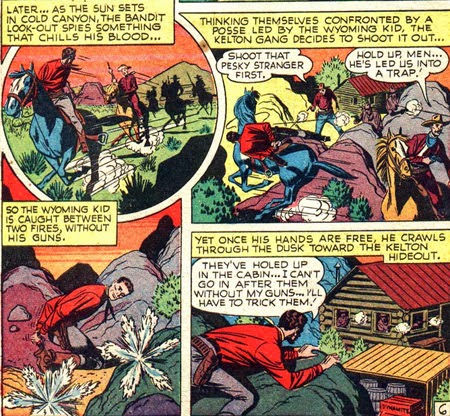 He sneaks into the hide-out and steals his guns and bullets back, the better to make everything explode! 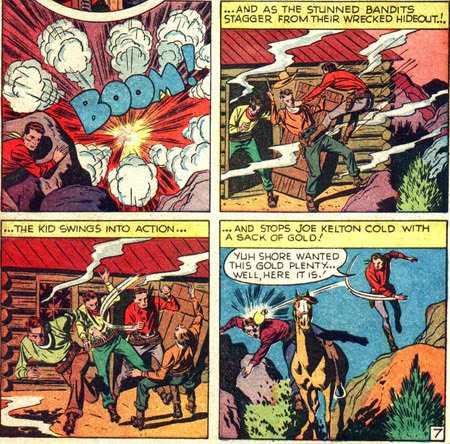 Never mind the demolitions expertise, what about that crazy leaping fighting style!? Geez! After he's defeated the outlaws, the town wipes his criminal record clean and invites him to some cold dinner (well, shoulda eaten while it was still warm) over which they explain they'd all been lured away by Kelton's promise of a gold rush. Didn't even leave the women and children at home. At least they learned their lesson, and the mayor is bitterly ashamed of their collective greed. But hey, the town STILL hasn't successfully been robbed, right? Well... That's debatable. Coda please! 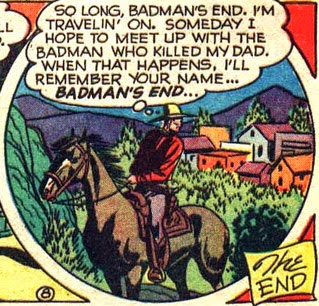 Oof... the Badman who killed yer pappy? That's what I call shoehorning the character's mission statement into the ending lest we forget the one thing that distinguished this cowboy from every other! A fun little western tale though.

Who's Next? Wading right into the Golden Age stuff that's in the "appendix". I love that kind of stuff. Several excellent choices!
Comics Golden Age Who's This?

googum said…
I'm guessing owlhoot was derived from using it as a signal? That or they stayed up late planning robberies. Not a term I hear every day; and I'm (originally) from Montana and have to use words like "reckon" regularly...
February 24, 2015 at 9:37 AM

Siskoid said…
I need a Montanese-as-written-by-some-New-Yorker to English decoder card.
February 24, 2015 at 9:40 AM